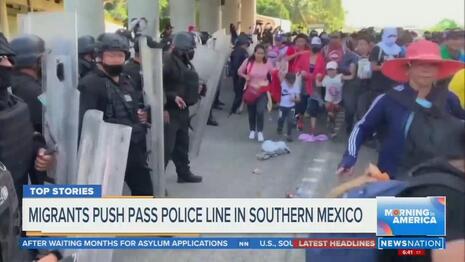 Over the weekend, a new migrant caravan numbering in the thousands continued its march toward the United States, breaking through a line of Mexican law enforcement officers in riot gear and, within the next few weeks, will pose a major national security threat and further exacerbate the Biden border crisis. Despite all that, this story was ignored on Monday’s broadcast network morning newscasts.

Worse yet, the story didn’t receive a mention on the two liberal cable networks either as CNN’s New Day and MSNBC’s Morning Joe couldn’t even spare a few minutes to offer a condescending dismissal of the caravan as imaginary or insignificant.

In contrast, NewsNation’s new AM show Morning in America had the story covered, dedicating 10 minutes and 37 seconds over its three hours with five segments and two news briefs. The border crisis also served as NewsNation’s lead political story.

The Fox News Channel’s Fox & Friends also gave the crisis the attention it deserved to the tune of 17 minutes and 52 seconds over three segments.

Back on NewsNation (formerly WGN), host and former ABC correspondent Adrienne Bankert announced in the 7:00 a.m. Eastern hour that “a group of about 2,000 migrants, mostly from Central America, have started their journey from southern Mexico to the U.S. border with hopes of gaining entry.”

Adding that “this group seems to be different,” Bankert went to Washington correspondent Joe Khalil, who noted that “typically, we see...surges like this...in the cooler months,” but the flow of illegal immigrants has yet to let up as “about 1.7 million migrants [have] come to the U.S. southern border just this year alone” with July and August seeing “close to 200,000.”

Khalil then walked through some of the footage coming out of Mexico and how, if they follow a court order, the Biden administration will be reimplementing the Remain in Mexico policy (click “expand”):

KHALIL: Now, take a look at what we're seeing just over the weekend. This group basically blew right through a border of Mexican police and security forces in riot gear. And as you mention, the numbers — there's different reporting. Some estimates are 2,000. Some are even higher than that — a larger group. Now, the leaders of this migrant caravan have said that their ultimate goal is to get to Mexico City, not to the United States and they want to get humanitarian assistance there. Of course, there are some reporters on the ground that are talking to some of these migrants who say that they do, ultimately, want to make it to the United States. These people are coming from Central America, South America, some even from Haiti, so what we know is that if they do end up reaching the U.S. border, the Biden administration is actually set to reimplement a Trump era policy — the remain in Mexico policy and that is expected to happen at some point in November. So, anybody who does make it to the U.S. border this time and tries to apply for asylum, legally is going to have to remain on the Mexico side of the border, but another group adding to these record totals, we've seen this year, certainly something to keep an eye on, Adrienne.

BANKERT: Joe, I think the biggest thing here is that noticing the tone, the attitude of those who are here, making their way to the U.S./Mexico border in a previous instances, it seems as though it's this very desperate group just looking for safety and there are some of those in that group. But this is much more well organized, as you were mentioning and they were shouting things such as Libertad — liberty and freedom — as they marched through Mexico.

Khalil would then offer a similar report in each of the next two hours with Bankert offering two news briefs near the bottom of the 7:00 a.m. and 8:00 a.m. Eastern hours.

In the first brief, Bankert said the thousands-strong caravan “just pushed their way through” past Mexican law enforcement and, for those that make it to the U.S. border, their journey will take at least “two weeks or more.”

Bankert reiterated Khalil’s point that, while some are going “to Mexico City to protest Mexico's treatment of migrants,” others were much more transparent in their answers to reporters on the ground that they’re going to the U.S.

She would also add in the 8:30 a.m. Eastern brief that there’s “[w]ord that people had to register to be in this caravan.”

Not to be left out, NewsNation correspondent Nick Smith had two reports of his own in the 7:00 a.m. and 9:00 a.m. Eastern hours, respectively. Here was his first spot (click “expand”):

BANKERT: Now as those immigrants make that long track. We want to know exactly where they're planning to enter the U.S. Nick is at our NewsNation smart board. What did you learn?

SMITH: The perception is that the caravan members intend to eventually make their way into the United States and earlier, a group did do that. You remember a group of Haitians as many as 12,000 by some reports made their way to Del Rio, Texas had this location. The distance from one nation to the next is a matter of feet, so a narrow stretch of water, it's easier to cross here. So this is why the cross. Now, encounters at the U.S. Mexico border are at a 21-year high. We're talking about migrants making their way through Central Mexico into the United States. Just in the last year, the border patrol has carried out more than one million expulsions of migrants back to Mexico or to their home nations.

To make the corporate liberal media look even more shameless, independent journalist Ali Bradley has reported since Friday from Tapachula, the southern Mexican city where the caravan assembled and took off.

Bradley included a video on Saturday of one man who said he was from West Africa and decided to make the journey “because it’s the best time” to come with someone like Joe Biden in office. As he walked, he carried a sign that said “Joe Biden is for all.”

A man traveling alone from West Africa carrying the sign reading “Joe Biden is for all” says now is the best time to go to the U.S. because of Joe Biden. He says he is hopeful the administration will let them in. #BorderCrisis pic.twitter.com/llClOU9y5z

Between Saturday and Monday, Bradley spoke with people from El Salvador, Honduras, Nigeria, and Venezuela, with many having said they were going to the U.S. for work and weren’t concerned about how they would be treated.

Here's video of Bradley speaking with a Nigerian:

Chidera is from Nigeria— He tells me he started planning his trip to the U.S. a year ago but had to save money. He traveled through the Darién Gap and knows @POTUS said the border is closed— but he is hopeful they will be allowed to live/work in America. #BorderCrisis pic.twitter.com/giaWTiOkB2

And to show the level of coordination and support for this caravan, Bradley posted a video of a medic station set up for the caravan as well as the caravan collectively stopping to take breaks in the shade.

MX: The medic station setup by an organization just outside of Huixtla providing water and first aid to migrants walking from Tapachula. #BorderCrisis pic.twitter.com/plBa7ZXhPM

Instead of covering a new chapter in the border crisis, ABC’s Good Morning America touted a hunted house in Denver, Colorado, CBS Mornings aired an interview with Bruce Springsteen and former President Obama, and NBC’s Today had a brief on Ryan Gosling being cast to play Ken in a Barbie movie.

Over on cable, CNN’s New Day spent over seven minutes touting Obama’s crude denunciation of alleged teen rapes in Loudoun County, Virginia as “phony trumped-up culture wars” and MSNBC’s Morning Joe dedicated a whopping 67 minutes to obsessing over January 6 and how Facebook has poisoned the minds of Americans, turning them into radical right-wingers.

To see the relevant NewsNation transcript from October 25, click here.