In shocking contrast, three CNN shows stepped up to the plate (out of a possible seven shows), spending six minutes and 44 seconds on the fall of one of their former mainstays; because he made them all feel good inside and promised he had the goods to take down then-President Donald Trump.

As NewsBusters reported back in April 2019, CNN gifted Avenatti “a whopping 122 appearances” in a year with MSNBC having “earned a close second with 108.” So, one could argue it wasn’t entirely surprising that at least one of them would censor any mention of how a man they lionized would be going to prison.

Instead, MSNBC defended the need to teach children that America’s an evil, racist country, got worked up over strawmen claims about how conservatives and Republicans were going to ban Black people from voting, asserted the right was turning the country into apartheid-era South Africa, and teased a Friday interview with a rapper about his new single on the COVID vaccine.

That means MSNBC’s Katy Tur Reports (with fill-in host Geoff Bennett), Ayman Mohyeldin Reports, Deadline: White House, The Beat (with fill in-host Jason Johnson), The ReidOut, All In, The Rachel Maddow Show, The Last Word, and The 11th Hour (featuring fill-in Ali Velshi) all saw no need to tell viewers about how such a trusted ally had was now a convicted felon. And, as my colleague Nick Fondacaro wrote on Thursday night, the CBS Evening News and NBC Nightly News felt the same way.

But going back to CNN, and it was quite the surprise to see weekday afternoon CNN Newsroom co-host Victor Blackwell give not one but two teases on Avenatti before a 90-second segment. 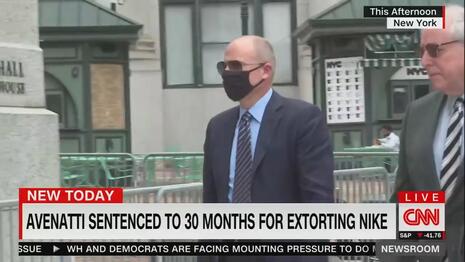 “And just in to CNN, Michael Avenatti, you remember the name. He is the attorney — or was the attorney for Stormy Daniels. He's been sentenced in an extortion case. Find out how long he'll spend in prison and what the judge had to say about it,” said Blackwell in the first tease, offering an almost jovial inflection about the previous era.

Blackwell kept up that tone in the segment: “You know the name from the Trump years, Michael Avenatti. He was the attorney who represented Stormy Daniels. He's just been sentenced to two and a half years in federal prison for trying to extort millions of dollars from Nike.”

Co-host Alisyn Camerota also tip-toed around CNN’s role in Avenatti, remarking that, “as you [all] know,” Avenatti represented Daniels.

Deranged anti-Trump legal analyst Elie Honig was brought in to summarize the case and conviction (which included Camerota seemingly unaware that Avenatti has been indicted in two other cases) (click “expand”):

HONIG: All said, a pretty good result for Michael Avenatti. I mean, I've done extortion cases involving less money — this was multi-millions — that had resulted in more time than two and a half years. Now, Avenatti went in front of the judge and he did the smart thing for any defendant. He expressed remorse Whether it was sincere or not, who knows. But he did get a bit of a break. But here’s the important thing. He has two more federal indictments pending, one in California, one in New York. He’s only going to get — if he gets convicted —

HONIG: — for stealing from his own clients and that's even worse than this because Nike is a powerful entity. He tried to extort them. They didn't pay him a penny. This is his own clients. He stole hundreds of thousands of dollars, so he’s got more problems ahead.

Fast-forward through an Avenatti-less edition of The Lead (with fill-in host Pamela Brown), CNN’s The Situation Room and host Wolf Blitzer had a four-minute-and-31-second segment in its 6:00 p.m. Eastern hour. 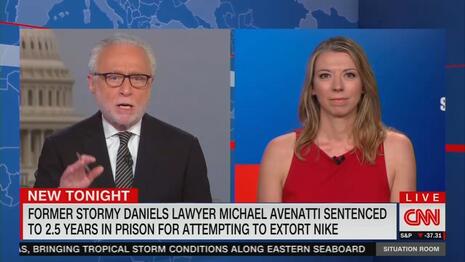 Similarly refusing to acknowledge CNN’s role in Avenatti, Blitzer instead referred to him as “the lawyer who became famous representing adult film star Stormy Daniels in her legal battle against former President Trump has just been sentenced to two and a half years in prison” in “a remarkable fall” from prominence.

Correspondent Kara Scannell delivered a live report, telling Blitzer that Gardephe said Avenatti “had become drunk on the power of his platform, or what he perceived his platform to be,” and that Avenatti’s “legal problems are far from over” with jury selection starting next week for a case in which he’s alleged of having stolen “millions of dollars from his clients, including one who is a paraplegic.”

Longtime CNN legal analyst Joey Jackson then provided important and sober analysis, but he too dispatched with Avenatti’s personal ties to the network (click “expand”):

Listen, you know, Wolf, there's certain rules of engagement with respect to dealing with clients. Obviously, the defense here was that he was doing nothing more than a zealous advocate. Certainly, that's all what every attorney takes the oath to do. But there's a distinction between being a zealous advocate and shaking down or otherwise extorting. That's what a jury concluded. These are not my words. And so, at the end of the day, when you're held to account, you have a jury trial. Remember, our system of justice, Wolf, he went on trial February of last year and he attempted to make his case, that he was simply trying to get a settlement that he felt was fair, just, and appropriate and used hard-nosed tactics to it. The jury rejecting it — resoundingly — and saying this was not hard-nosed tactics. This was fraud, it was extortion, and it was resulting in your conviction by unanimous — that is 12 jurors. And so, what we have to keep in mind, Wolf, that two and a half years, no one wants to spend a day in prison. We know he has spent time in prison and he’ll be credited with that, to be sure. The judge had a lot to say about the time he spent — this judge — in sentencing him, and in fact, the judge took that into consideration, saying the conditions were deplorable and that should have never been and think the judge even said, Wolf, in a jail at this time in our age in the united States, that shouldn't have been. But at the end of the day, two and a half years is significant time. He faced certainly more than that. Probation wanted eight years, but he still faces a world of hurt as it relates to his crimes in California — alleged crimes — and in New York.

[W]hat we're looking at is we’re looking at a California case with regard to him treating clients badly and defrauding them. We're looking at a New York case as it relates to Stormy Daniels and apparently misappropriating funds there. And so, when you look to that, in the event that he's convicted, you're going to see years and years added on to the time here. But this was one moment in time he has a right, certainly a presumption to innocence, like anybody else will have. He has those trials. As to this case, he's lost that right to presumption of innocence. He was convicted by a jury. But these two other cases could add significantly more time to the time that he's facing already as it relates to the extortion charge of Nike — two and a half years — the judge sentencing him to today. And I think, quite frankly, Wolf, you know, in terms of the guidelines, he certainly made out extraordinarily well when you have the prosecutor wanting much more time than that, and probation recommending an eight-year sentence, the judge saying a lengthy sentence wouldn’t be appropriate under these circumstances. 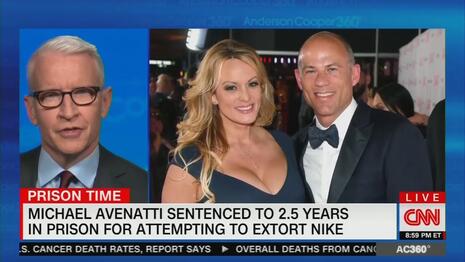 Following a no-show on Erin Burnett OutFront, AC360 was the only primetime show to mention Avenatti as Cuomo PrimeTime, and Don Lemon Tonight (with fill-in host Laura Coates) all refused to mention the man who turned them into bugs attracted to a light post.

That said, AC360 only had 43 seconds on Avenatti. Cooper teased the brief before ending the show with the news, but he did, however, stand out as the only CNNer to admit that Avenatti was close to CNN: “When details emerged of Daniels’s alleged relationship with the former president, Avenatti almost instantly became a regular presence on both network and cable television news shows, including this one.”

Prior to the sentencing (and separate from our official time count), CNN Newsroom with Ana Cabrera and Inside Politics with John King had news briefs of 31 and 24 seconds, respectively.

MSNBC’s refusal to conduct basic journalism was made possible thanks to the endorsement of advertisers such as Liberty Mutual, Noom, Qunol, and USAA. Follow the links to see their contact information at the MRC’s Conservatives Fight Back page.