Toobin Suspended by New Yorker, Granted Leave from CNN After Exposing Himself 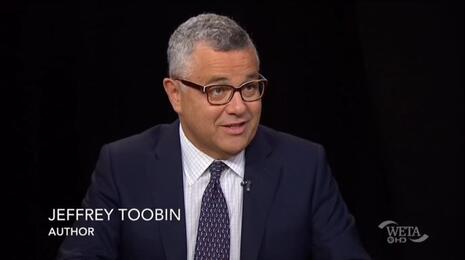 Warning: The following post contains information that is not suitable for children. Reader discretion is strongly advised.

Cue the jokes, NewsBusters readers. On Monday, The New Yorker announced that staff writer Jeffrey Toobin had been suspended for having exposed his genitalia and allegedly engaging in a sex act during a Zoom call last week between New Yorker staff and journalists with New York City-area NPR affiliate WNYC.

Toobin, who’s also CNN’s chief legal analyst, was “granted” permission by the network to take “some time off while he deals with a personal issue.”

At this point, it should be pointed out that Toobin flashing his penis during a Zoom call was what got him suspended and not when he impregnated colleague Jeff Greenfield’s daughter Casey in 2008, and reportedly pressured her to get an abortion.

And further, he still wasn’t taken off the air or faced time off in February 2010 when he was dragged into Manhattan Family Court to pay child support, but it was a grotesque act of sexual misconduct that caused both outlets to move quickly to keep him off their airwaves and pages.

Vice News broke the story wide open and included a statement from Toobin that said he had made “an embarrassingly stupid mistake, believing I was off-camera,” and thus was under the impression “no one on the Zoom call could see me.”

The Vice article added: “Toobin’s Conde Nast email has been disabled and he has not tweeted since October 13” and Toobin had appeared on CNN as recently as Saturday.

Upon having updated the story to include CNN’s statement, reporter Laura Wagner concluded that she had still not heard back from Toobin’s agents, the publisher of his latest book (Random House’s Doubleday), and WNYC.

Two people who were on the call told Motherboard separately that the call was an election simulation featuring many of the New Yorker's biggest stars: Jane Mayer was playing establishment Republicans; Evan Osnos was Joe Biden, Jelani Cobb was establishment Democrats, Masha Gessen played Donald Trump, Andrew Marantz was the far right, Sue Halpern was left wing democrats, Dexter Filkins was the military, and Jeffrey Toobin playing the courts. There were also a handful of other producers on the call from the New Yorker and WNYC.

Both people, who spoke on the condition of anonymity in order to speak freely, noted that it was unclear how much each individual person on the call saw, but both of the people we spoke to said that they saw Toobin jerking off. The two sources described a juncture in the election simulation when there was a strategy session, and the Democrats and Republicans went into their respective break out rooms for about 10 minutes. At this point, they said, it seemed like Toobin was on a second video call. The sources said that when the groups returned from their break out rooms, Toobin lowered the camera. The people on the call said they could see Toobin touching his penis. Toobin then left the call. Moments later, he called back in, seemingly unaware of what his colleagues had been able to see, and the simulation continued.

So, for the forgoing future, CNN will be without their legal analyst that, in just the last few years, warned when Justice Kennedy retired that abortion would soon be illegal in dozens of states (it’s still legal in all 50 states), claimed Trump had subjected Lt. Col Alexander Vindman (Ret.) to “North Korean-style punishment,” insisted President Trump’s impeachment defense represented “White House and white people,” and lambasted “unpatriotic” Trump as someone would have been “fast friends” with Pol Pot.

In other words, you just hate to see something like this happen to such a standup gentleman. After all, Toobin was such a staunch defender of one Anthony Weiner during the first Weinergate.

After the late, great Andrew Breitbart published explicit photos Weiner had been sending to women that were not his wife, Toobin insisted Weiner's actions were no more than “a mild prank” and not “a big deal.” Toobin added that the attacks against Weiner “really excessive.”

Note: This story has been updated with more details from Vice and a NewsBusters flashback.