CBS This Morning was arguably the strongest. Tweeting from Texas, correspondent Mireya Villarreal stated: “This could have been a much bigger tragedy. Amazing to see so many people pull out their guns to protect fellow parishioners.”

Hopefully no one showed this tweet to Shannon Watts because if so, CBS would receive a talking to with demands for a reprimand. Also, thoughts and prayers to Tom Nichols.

In the first of two liveshots, Villarreal reported that “investigators are praising the heroic action of parishioners who helped stop this gunman” as “several people actually jumped up when the shots rang out, pulled out their guns to try to protect the congregation.”

“The gunman was killed by a parishioner who’s part of a voluntary security team. Several more members drew their guns as well. There were more than 240 people inside at the time,” she added, going into a soundbite also praising the armed parishioners from Lt. Governor Dan Patrick (R-TX).

Villarreal came back in the 8:00 a.m. Eastern hour with more praise (“expand”):

DAVID BEGNAUD: Mireya, what do we know about the volunteer who took down the gunman?

VILLARREAL: Well, right now not a lot of information is being released on him just yet. But David, look, we know right now that this could have been a much bigger tragedy and law enforcement is crediting several parishioners with saving more than 240 lives, the people that were inside this church yesterday during the worship service. Now as you said, video did capture the gunman as he pulled out a gun and started firing during the service. One armed parishioner shot back and killed him just six seconds after the shooting started. We’re told the armed congregants were part of a volunteer security team.

VILLARREAL: We have learned that the two victims that were killed yesterday were longtime church-goers Tony Wallace and Richard Wright. A lot of people are praising them on social media for being heroes in this situation, trying to save other members of the congregation. Right now, the FBI is working with local law enforcement and state law enforcement to try and figure out more about this gunman. They want to know did he target this specific church, and did he have some sort of ideology, some sort of hate behind why he decided to create this attack. We will continue to follow this investigation as it develops throughout the day, Adriana.

Fill-in co-host David Begnaud noted that, like Orthodox Jews a day earlier when someone with a machete attacked their Hanukkah celebration, people in Texas also “fought back” with a “volunteer guard” taking down the gunman

After Villarreal’s second liveshot, Begnaud and his fellow stand-in co-hosts praised those who carried (click “expand”):

JERICKA DUNCAN: I know. And you see more and more people fighting back.

BEGNAUD: It was incredible. You saw that — the man who took him down. I mean, he acted as he saw the guy stand up, he kinda walked to a guard. It's like he was ready.

BEGNAUD: Not at all, and took him down within six seconds. It's — it’s incredible.

Over to ABC’s Good Morning America, Amy Robach stated in a tease that they’d have details on “[t]he heroes who jumped in to help stopping the shooting in just six seconds.”

National correspondent Marcus Moore noted that “at least five other parishioners pulled out handguns and carefully approached the fallen gunman.”

Moore later alluded to “the alleged hero Jack Wilson, who says he shot the gunman released a statement on his Facebook page.” 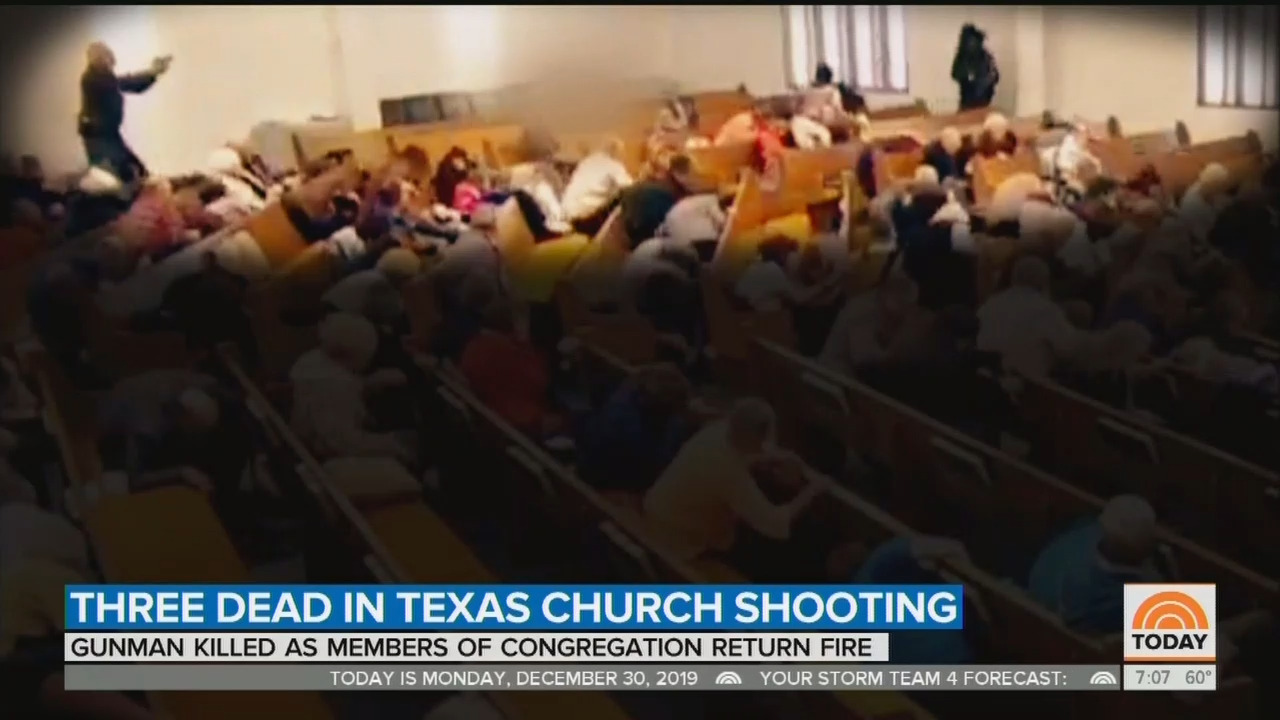 Outside the church, correspondent Blayne Alexander didn’t sound at all like Watts, Beto O’Rourke or Congresswoman Veronica Escobar (D-TX), instead telling viewers that “within seconds” of when the gunman started shooting, “parishioners who were also armed spring into action.”

Also to her credit, Alexander was the lone reporter to allude to how, after the Sutherland Springs church shooting, “state lawmakers passed two laws” with “[o]ne allowing guns inside churches, the other making it easier for congregations to form security teams,” thus allowing Sunday’s attack to be halted in six seconds.