On Saturday afternoon, Never Trump attorney and liberal cable news darling George Conway leveled sexist attacks at Congresswoman Elise Stefanik (R-NY) on Twitter for being against impeachment and tussling with fellow media favorite and Congressman Adam Schiff (D-CA), calling her “lying trash” and sharing a doctored photo of her flipping off a camera.

After being caught having shared the doctored image, he didn’t apologize. Instead, he made excuses: 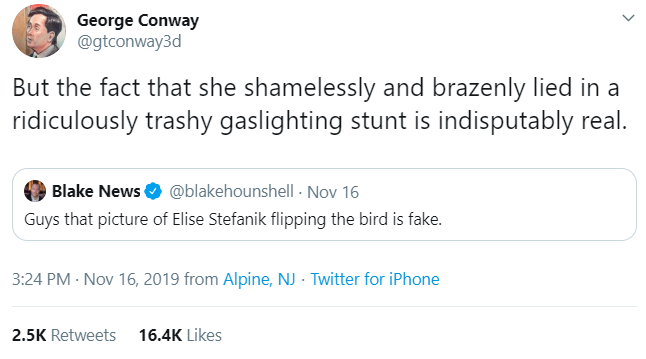 Of course, CNN did nothing to rebut or even acknowledge these attacks on-air. Their reason? To go out on a limb, they might have seen nothing wrong with that level of sexism and peddling of fake news. And why? Well, Stefanik is seen as an enemy of theirs in the impeachment war.

The closest anyone came to addressing it on-air was weekend host S.E. Cupp, who vaguely alluded to a media double standard if she was a Democrat while CNN Newsroom host Ana Cabrera noted that Conway donated to Stefanik’s 2020 opponent (click “expand”):

CUPP: Look, I thought she was an effective question. She was also an effective sort of stunt. They know what the rules were. They knew they were going to break them and then make it look like they were being muscled and silenced. That's a strategy I guess I think for Republicans and for the audience of one in Donald Trump. She did a very good job. Now, whether that affects her personally remains to be seen. Her opponent in her New York congressional race, Tedra Cobb raised $400,000 in 24 hours....

CABRERA: Including a donation to George Conway

CUPP: It introduced a lot of people to Elise Stefanik for the first time probably for many in a good way, probably for many others in a bad way and I do have to say, I think some of the media have handled Elise Stefanik in her moment with some partisanship.I think if a Democrat had been as forceful in one of those hearings, she'd be praised. Elise Stefanik was sort of roundly criticized for what she did. She did what politicians do in these things.

A CNN.com search yielded nothing about George Conway since CNN’s Wolf Blitzer decided ethics were meaningless last week when he asked George’s wife Kellyanne about the state of their marriage.

Further, CNN host and liberal media janitor Brian Stelter has yet to tweet about, cite on his show Reliable Sources, or mention in his newsletter this instance of real, undeniable fake news. Same goes for his minion and conservative media turncoat Oliver Darcy.

So much for being media reporters. On the other hand, it was very on-brand a few weeks after they helped ABC by covering up their decision to choose Epstein and his powerful friends over young girls.

Well, not everyone ignored it. Former Ted Cruz aide-turned-Never Trumper-turned-liberal CNN political commentator Amanda Carpenter weighed in by defending Conway, smearing Stefanik by arguing that the fake photos seemed credible to her: 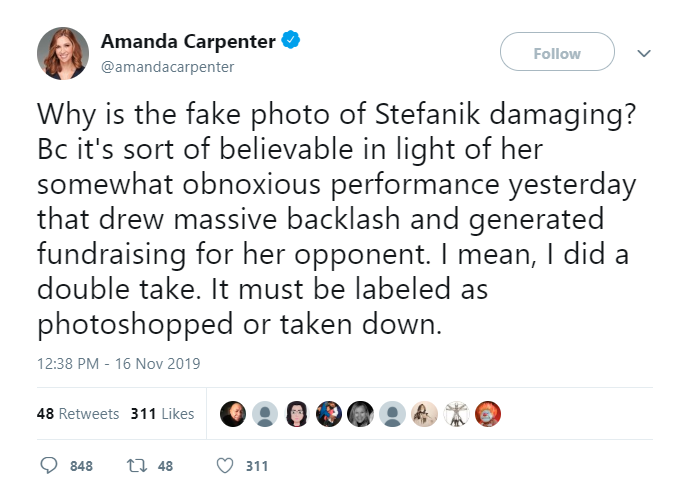 To put it another way, she's taken the same approach the liberal media took with Michael Wolff's unsubstantiated garbage book Fire and Fury (and then, to a far lesser extend, Siege: Trump Under Fire) of if it rings true, it is true!

In subsequent tweets, Carpenter insisted that she didn’t fall for the photo and “called for it to be taken down” because “[p]hotoshopped pics are dangerous on social media,” but that was negated by the fact that she opined that she could seem being real based on her disdain for Stefanik.

And yes, this is the same person who wrote a book about Trump gaslighting called Gaslighting America. It was hailed by The Washington Post’s Carlos Lozada as “the best death-of-truth book I read in 2018.” This line that Lozada pulled out seems ironic in this scenario as perhaps Carpenter should follow her own advice: “Let go of the outrage already . . . be vigilant but don’t flip out.”

And while we’re at it, the CNN money must be rather intoxicating to abandon one’s conservative principles simply because Trump articulates them. While appearing on the May 7, 2018 installment of The View, she swooned that she’s “a fan” of Michael Avenatti and Stormy Daniels as more effective at damaging the President than Democrats.

Yikes. It’s safe to say that take would now be seen as ice cold.