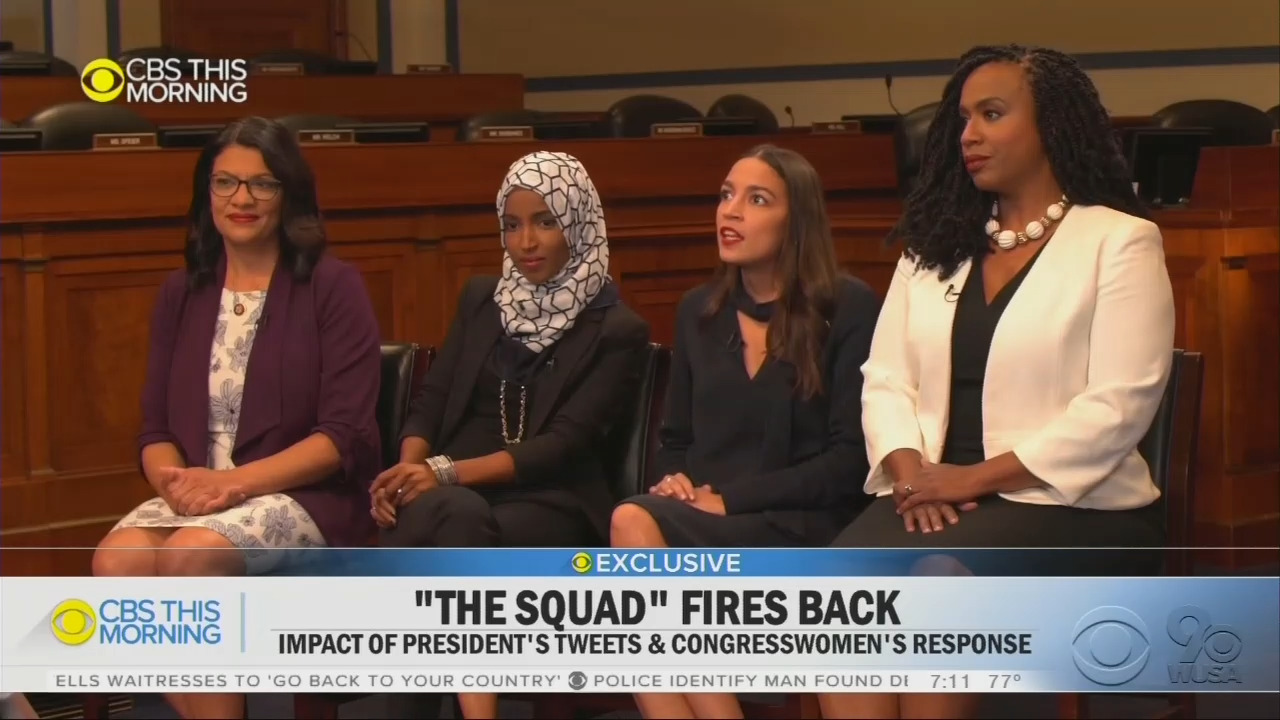 While NewsBusters has spent a copious amount of words this week on the liberal bias on television this week against the President for his criticism of the squad, a review of The Washington Post showed that it spilled more than its share of ink to defend the so-called “Squad” over the course of 16 print stories from Monday to Friday.

There was only one story in Monday’s paper, but coverage ballooned to four items on Tuesday (with four on Wednesday, three for Thursday, and four inside Friday’s paper), ranging from supposedly straight news items to some that actually featured a slightly different font to delineate that change to analysis.

In a Tuesday story “Republicans, business ranks appear to shrug off remarks,” White House reporter Toluse Olorunnipa fretted that the business community (such as those who were at the White House for a Made in America event) and Republicans hadn’t sufficiently opposed the President due to his “racist trope.”

This was similar to a story that day by Craig Timberg, Drew Harwell and Tony Romm complaining about how Twitter didn’t take action against Trump for his tweets. Hopefully the CNN Media team saw it.

Anyway, Olorunnipa turned to none other than the hyperbolic CNN presidential historian Douglas Brinkley for Trump bashing (click “expand’):

The president, who has grown more comfortable in Washington as he has surrounded himself with assenting voices, has learned over the past three years that there is little consequence within his party or from aligned corporate and religious leaders for embracing incendiary rhetoric and pugilistic attacks.

Even as a few Republican lawmakers spoke out against Trump’s language, with some specifically calling it racist, most stayed quiet or sought to soften their admonishment of the president by mixing it with criticism of the women he attacked.

“They’re just terrified of crossing swords with Trump, and they stay mute even when the president unleashes racist tirades,” said presidential historian Douglas Brinkley, who has been critical of Trump. “Republican leaders are now culpable for encouraging this kind of rank bigotry. By not speaking out, by staying mum, they are greenlighting hate rhetoric.”

While Republicans in the past have tried to cast their party as welcoming to immigrants and Americans from all backgrounds, the fact that so few spoke out against Trump’s comments undercut that message, Brinkley said.

Also that day, Ashley Parker, Rachael Bade, and John Wagner contributed to the cause in the article “Trump escalates attacks on 4 Democrats.”

The trio gushed that while Trump was “defend[ing] his racist remarks,” Congresswomen Alexandria Ocasio-Cortez (D-NY), Ilhan Omar (D-MN), Ayanna Pressley (D-MA), and Rashida Tlaib (D-MI) “offer[ed] a competing vision of America that they said was based on inclusiveness.”

The reporters sought to undercut how the President has cited the congresswomen for their hateful rhetoric (both at the top and end of the story), but when it came to “The Squad” going after the President, it was offered without pushback and suggested that they offer “a broader view” of America (click “expand”):

Omar, who has come under fire for her criticism of Israel that some Jews deemed anti-Semitic, pushed back on that suggestion, arguing that “every single statement that we make is from a place of extreme love for every single person in this country.” She also compared their actions with the words that Trump has uttered.

“This is the agenda of white nationalists,” Omar said. “He would like nothing more than to divide our country on race, religion, gender orientation and immigration status, because this is the only way he knows he can prevent the solidarity of us working together across all of our differences . . . this is his plan to pit us against one another.”

The four women sought to contrast their proposals — fighting for universal health care and the humane treatment of immigrants, for example — with the president’s. Pressley said the group was “sent here with a decisive mandate from our constituents” and encouraged everyone to focus on lowering the price of prescription drugs, expanding affordable housing and addressing the crowded conditions of migrants at the border, for example.

Bade partnered for Wednesday’s paper with Mike DeBonis and John Wagner a piece about the House resolution to condemn the President’s tweets, which proclaimed (click “expand”):

The imagery of the 240-to-187 vote was stark: A diverse Democratic caucus cast the president’s words as an affront to millions of Americans and descendants of immigrants, while Republican lawmakers — the vast majority of them white men — stood with Trump against a resolution that rejected his “racist comments that have legitimized fear and hatred of new Americans and people of color.”

The Republican National Committee provided a list of comments to bolster Trump’s contention, but in none did the four women say they hate America, as the president has asserted.

They went onto defend the cursing by Tlaib by noting that Trump has also dropped expletives on the campaign trail as well as attack Senate Majority Leader Mitch McConnell (R-KY) for not criticizing Trump as being anti-immigrant when his wife and Transportation Secretary Elaine Chao came her as a young girl from Taiwan.

Saving perhaps the worst for last, Michael Scherer’s Wednesday piece posing as a straight news article instead of analysis or opinion that sought to connect Trump to some of the ugliest voices in American history.

Scherer’s lede ruled that Trump’s “reelection campaign will feature the same explosive mix of white grievance and anti-immigrant nativism that helped elect him” featuring a “combustible formula of white identity politics” that “already has reshaped the Republican Party, sidelining, silencing or converting nearly anyone who dares to challenge the racial insensitivity of his utterances.”

After dubbing his base as “blue-collar white voters” who don’t like racial diversity, Scherer attacked the President’s vision of patriotism as no more than a white fantasy (click “expand”):

At the core of the strategy is Trump’s consistent drumbeat of equating the white European immigrant experience with the American ideal, setting those on his side of the divide against the politically correct elites, outsiders, immigrants or nonwhites who he implies are unfairly threatening what is good about the country.

His strategy is sharply reminiscent of that waged by segregationist George Wallace in multiple presidential campaigns beginning in the 1960s. Republican candidates including Richard M. Nixon, Ronald Reagan and George H.W. Bush have since used milder variations of race-based politics to try to pry white voters from the Democratic Party.

But Trump has been notable for repeatedly saying out loud what earlier candidates merely hinted.

To try to excite his core voters, he continues to describe Latino immigration as a threat to the nation by arguing that “we don’t have a country” if borders are not enforced. More recently, he unsuccessfully championed an effort to add a citizenship question to the U.S. census that would have increased the political power of white voters by discouraging Latino participation in the count and allowed states to draw legislative districts to exclude undocumented immigrants.

Scherer also saw fit to argue that Trump criticizing far-left members of Congress “struck at the heart of American identity by arguing that citizens from immigrant families should not tell ‘the people of the United States, the greatest and most powerful Nation on earth, how our government is to be run.’” Eye roll.

Unfortunately, the lengthy screed expanded on that point (click “expand”):

Asked Monday by a reporter if he was concerned that white nationalists were associating themselves with his argument, Trump did not back down.

“They are trying to take away our history and our heritage,” he said of the mainstream media in August 2017, shortly after attracting widespread criticism for his sympathetic comments about those attending a deadly white nationalist demonstration in Charlottesville.

He has been joined in more recent years by pro-Trump pundits, such as Fox News Channel host Tucker Carlson, who have embraced similar nativist arguments that cast immigrants as less authentic Americans.

Ashley Jardina, a professor at Duke University who recently wrote a book called “White Identity Politics,” said a majority of white Americans express some racial resentment in election-year surveys. Between 30 percent and 40 percent embrace a white racial identity. It is the latter group, with concerns about growing immigration threatening their racial status, who gravitated strongly toward the president.

The feeling of white identity is much stronger among non-college-educated whites than those who went to college, she said. “We do know that it is politically mobilizing,” Jardina added. “Those who feel racial solidarity have more likelihood to participate in politics.”