With Thursday marking the 75th anniversary of the Allied invasion along the northern coast of France known as D-Day, news organizations have been offering special coverage with incredibly powerful, substantive, and fitting tributes to both those lost that day, since then, and those remaining veterans.

But then there’s Wednesday’s Hardball on MSNBC and guest Bill Nye the Science Guy, who compared the need to fight climate change to D-Day.

Host Chris Matthews led into Nye’s lunacy by stating how he was captivated by the recent documentary about Apollo 11 because it correctly reminded him of “how vulnerable we are” because we live on the one habitable planet (that we know of) in a much larger universe and “[i]f something happens to that, we’re all gone.”

Nye responded that “[i]t's not that we’re all going to die in 12 years” if massive climate change legislation is enacted, but rather “we’re not going to be able to move our infrastructure, our seaports, our railroads and so on and move our agriculture away from the equators fast enough to feed everybody as we get to be nine and 10 billion.”

He then dropped the D-Day comparison:

There’s enormous opportunities. You know, I am always optimistic about this because tomorrow is the anniversary of D-Day. And it was, of course, there was tremendous loss and tremendous sacrifice. But it was part of this greater idea that we have a global problem and we’re going to solve it and I — I always respect that. You know, both of my parents were veterans. They’re both at Arlington. And we can do this. It’s the United States And things are changing so we can do this, Chris. Let’s go.

In response, Matthews heaped more praise on Nye as the lefty and former grade school science class icon thanked him for the compliments: “Keep it up. You’re our leader, Bill. Thank you so much. You know you are. Thank you, Bill. And we had to have you on tonight.”

So Nye decided to follow in the footsteps of CNN host Chris Cuomo, who asserted last year that members of the far-left, radical, and violent group Antifa were just like those who fought on D-Day.

After that nonsense, Matthews’s closing commentary in the final segment was also about D-Day and, while it seemed to start all well and good, he decided to praise none other than Senator Mitt Romney (R-UT) for a speech on the Senate floor praising “the alliance of the great democratic countries” involved in D-Day that Matthews “wish[es] our own President understood.”

Nonsense is offered up on a daily basis by figures like Nye and Congresswoman Alexandria Ocasio-Cortez (D-NY), but the notion that conservatives don’t show concern for the environment is nonsensical.

Writing back in April for the Washington Examiner's print edition, Josh Siegel reported how Republican Congressmen Matt Gaetz and Francis Rooney (FL) have been pushing alternatives to ideas from the far-left. And to add onto that, there are groups like the American Conservation Coalition, which was formed in 2017 to advocate for and educate the public about how “economic and environmental success can go hand in hand.”

To see the relevant transcript from MSNBC’s Hardball on June 5, click “expand.” 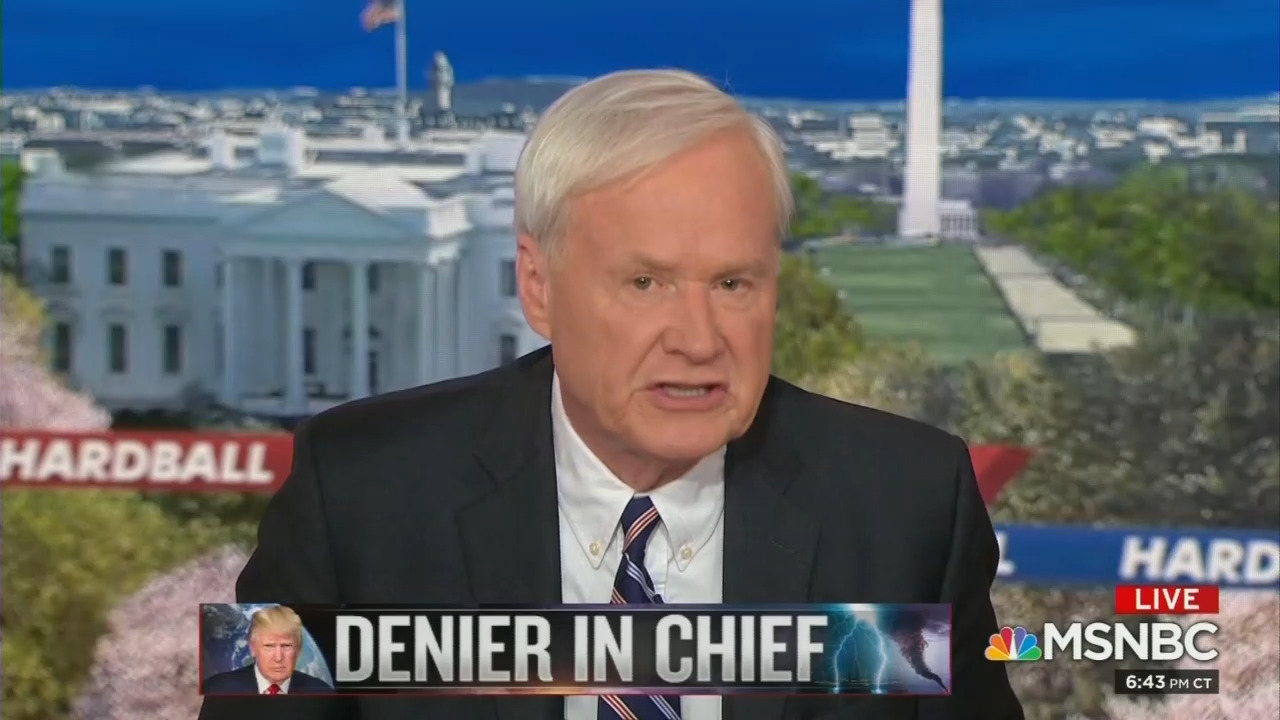 CHRIS MATTHEWS: Early this week an Australian think tank warned that civilization was in danger of crumbling by the year 2050 if more wasn’t done to confront climate change more aggressively. Well, that shocking report is just the latest headline in what seems to be a constant stream of disturbing news about climate change these days, including how it's leading to the collapse — look at this stuff — of a quarter of Antarctic’s ice sheet. That's happening right now, threatening the extinction of one million species and causing rising sea levels that could swamp major cities and displace nearly 200 million people.

MATTHEWS: I — one thing I have to ask you about. It sounds like Trump who does no homework, who has no sense of history, I don't think he took a single science or humanities course in college, come up with the thing about tornadoes 90 years ago. Somebody is feeding him this crap, somebody is giving him an arsenal of B.S. to challenge science.

BILL NYE: Yes. You know, you call it cherry picking the data. It's a very common thing. You can find a year where there are an exceptional number of torn — or seem to be an exceptional year of tornadoes, but the key to it is, the world is getting warmer faster than it's ever gotten in history. So, climate change and global warming are the same thing. Global warming, more heat energy is causing climates to change and extreme weather to get — to increase to more extreme weather events. These are all the same thing. Pretending or being told by some of his advisers that these are different ideas is incorrect.

MATTHEWS: Can we argue this in terms of experience? For example, I have been here for 47 years in Washington. It was a predictable weather pattern. It was pretty cold in the winter. It snowed once in a while. Not too much. They were always surprised by snow here. And then in the summer, starting sometime like July or August, July was the worst month in the Farmer’s Almanac and you felt like a big wet heavy wool blanket was thrown over you after your shower. It’s always has been that way. Now, it’s not like that. The weather here the last three or four days has been spectacular. You can't predict it anymore.

NYE: Well, this is — I mean, there’s no question the world is getting warmer and there’s no question weather patterns are changing. Just are we going to have the political will or the drive to do something about all the carbon dioxide and methane we’re putting in the atmosphere and changing from a fossil fuel economy to renewable energy economy and so —

MATTHEWS: What will the signs, like biblical signs between now and 2050 say where people say stop denying? This is scary.

NYE: — oh well, there are two things are happening. First of all, young people are very concerned about climate change. People of my generation and perhaps yours are where you’re going to find climate change. Once in a while you meet a young person and I believe the other side is very much aware of this. I have heard both Harris Faulkner and even Sean Hannity acknowledge that there’s a political reason to embrace climate change, a political reason to have a position and that is amazing.

MATTHEWS: I know who they are.

NYE: — people on the other cable network have heretofore been in lock step with the President and his advisers on this — on climate change and the chink — cracks are starting to form, so come next election, the election after this one, all candidates are going to have to have a position on climate change but the concern is, is it going to be soon enough. And so, you know, I have been talking about this for over 20 years.

NYE: And so the time to act is now.

MATTHEWS: You know what, Bill? The one thing that grabbed me in was watching Apollo 11 the other night in a hotel. I was stuck in a hotel room after work one night alone and I was watching that great documentary and when the astronauts go around the moon and see the Earth, it's chilling because you realize how vulnerable we are. We’re not the universe. We’re just one place in the universe where we can survive and it’s got this wonderful blue-gray — blue-green or — shell around us. Not even a shell, but a film and you realize that's us.

MATTHEWS: If something happens to that, we’re all gone. 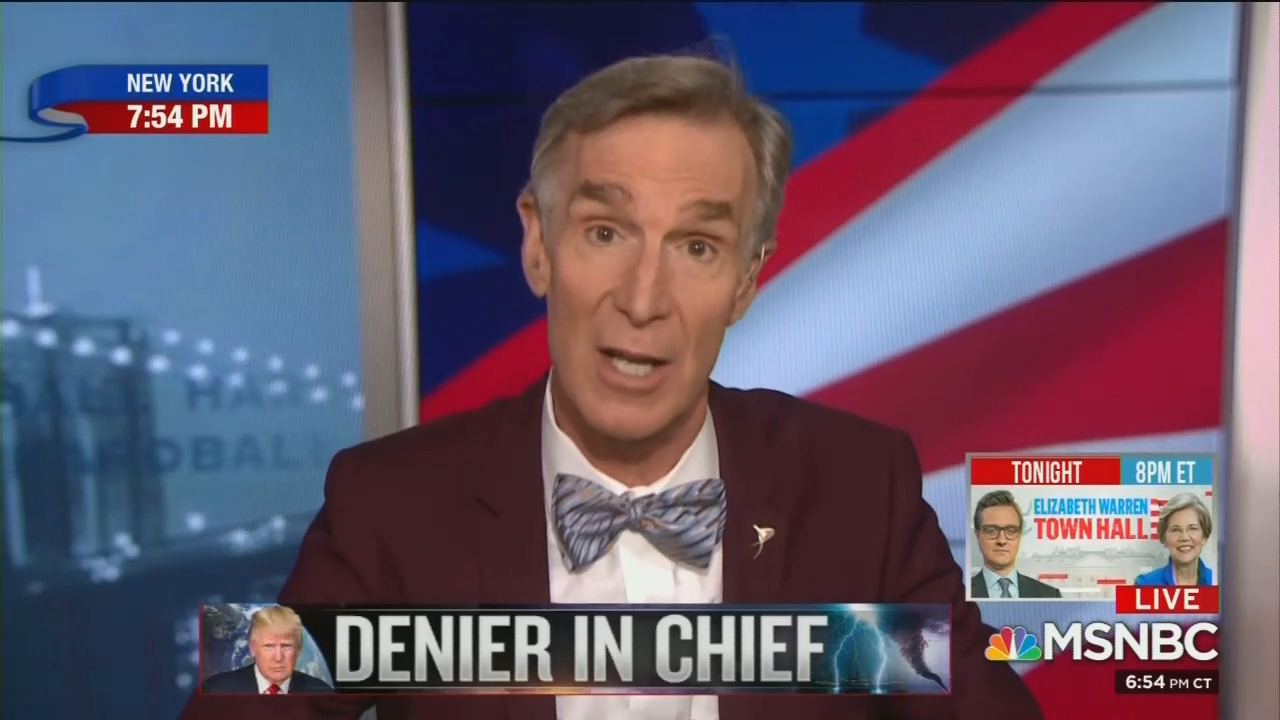 NYE: So, you know, the big thing is the speed, everybody. It's not that we’re all going to die in 12 years. It’s just that we’re not going to be able move our infrastructure, our sea ports, our railroads and so on and move our agriculture away from the equators fast enough to feed everybody as we get to be nine and 10 billion unless we get to work. There’s enormous opportunities. You know, I am always optimistic about this because tomorrow is the anniversary of D-Day. And it was, of course, there was tremendous loss and sacrifice. But it was part of this greater idea that we have a global problem and we’re going to solve it and I — I always respect that. You know, both of my parents were veterans. They’re both at Arlington.

NYE: And we can do this. It’s the United States

NYE: And things are changing so —

MATTHEWS: Keep it up.

MATTHEWS: Thank you so much. You know you are. Thank you, Bill.

MATTHEWS: And we had to have you on tonight.

MATTHEWS: Tomorrow is June 6th, the day of great historic pride for Americans because of the, courage of our forces in taking Normandy. Because of the cause we are fighting against Nazism, because of our leadership as a country. The victory at Normandy, the opening of the western front against Adolf Hitler was all about an alliance. It was about General Eisenhower's determination to hold together the allies. It was military and political teamwork which that great American general personified. Eisenhower was an ally and never forgot it and that was the greatness of the victory on V-E Day, the ability of the world's forces to stick together, the greatness of what came after the western front was the alliance stuck together after the war. I love what Senator Mitt Romney said yesterday about the victory at Normandy, but also about the great legacy it created, the alliance of the great democratic countries.

SENATOR MITT ROMNEY (R-UT): Alliances are essential to America's security, to our future. I can't state that more plainly. [SCREEN WIPE] We should strengthen our alliances and not dismiss or begrudge them. [SCREEN WIPE] It's in the United States’s most vital interest to see a strong NATO, a strong Europe, stronger ties with the free nations of Asia and the pacific, the subcontinent and with every free country. We need to hold our friends closer and not neglect them or drive them away.

MATTHEWS: So true. I wish our own President understood those words.