Kane’s hot take came in a tweet responding to a National Review editorial about the dangerous rise of leftist mobs (which, hopefully, hasn’t been read by CNN’s Brooke Baldwin) in the wake of the Kavanaugh confirmation fight and other acts of political harassment against cabinet secretaries, U.S. Senators, and members of Congress on a ballfield.

Here’s Kane’s full tweet (which, as of this post’s publication, was still up): 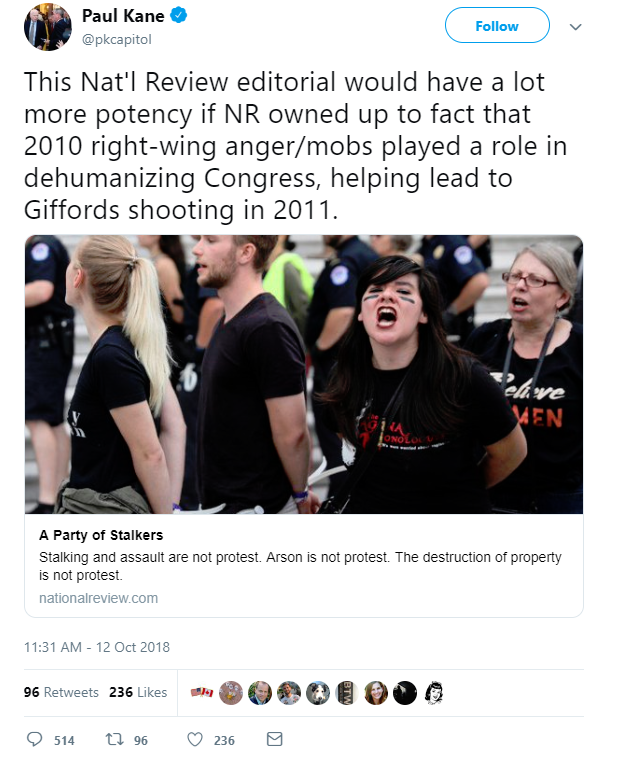 There’s only one answer to this tweet and it’s to call it out as a lie. And just think that he’s supposed to be a fact-based, objective reporter for the “Democracy Dies in Darkness” newspaper.

Kane offered a puny attempt to cover his rear later in the day, writing: “Sorry. This tweet incorrectly suggested that the tea party was to blame for Giffords shooting. Police never determined a motive for her shooting.”

Close but no cigar, Paul. You’re still wrong and seemingly stuck in 2011 when, as my colleague Rich Noyes showed, the liberal media rushed to tie Loughner to conservatives and, most notably, Sarah Palin’s cross-hairs map, without evidence. To see the issue of Notable Quotables on the shooting’s media coverage, go here.

“It is legitimate to hold Republicans and particularly their most virulent supporters in the media responsible for the gale of anger that has produced the vast majority of these threats, setting the nation on edge,” The New York Times editorial board claimed on January 9, 2011. After the June 14, 2017 Steve Scalise shooting, The Times admitted there was no connection.

This came despite the reality of how liberal journalists ranging from Chris Matthews to Keith Olbermann to Amy Robach to the late Ed Schultz and Montel Williams had, in years prior, either fantasized about dead conservatives or excused threats against them.

On January 18, 2011, Noyes found that, from January 8 to January 12, the “big three” networks of ABC, CBS, and NBC spent 82 percent of their coverage on our national discourse connecting conservatives to Loughner’s violence. To see more, click here.

A January 11, 2011 CBSNews.com piece touted those linking Loughner to conservatives, but conceded that “the evidence seems to indicate Loughner lacks a fixed ideology (outside of anti-government sentiment) and may be mentally unstable.”

Turns out, Kane’s own newspaper provided some evidence to disprove his falsehoods. Here’s excerpts from a May 25, 2011 item (click “expand”):

A federal judge ruled Wednesday that shooting suspect Jared Lee Loughner is mentally unfit to stand trial for the Jan. 8 rampage in Tucson that wounded Rep. Gabrielle Giffords and killed six, citing expert testimony that Loughner is schizophrenic and shows a paranoid distrust of his own defense attorneys.

Entering Wednesday’s hearing, Loughner, wearing a khaki prison suit, could be heard mumbling that the proceedings were “treasonous,” according to a witness.

Also, the Associated Press reported that Loughner said what sounded like “Thank you for the freak show. She died in front of me” before being escorted from the courtroom.

The judge’s ruling came after he reviewed the findings of two court-appointed mental-health professionals who had examined Loughner during his five months at the federal facility in Springfield.

Further, The Week wrote this about Loughner that same week:

Loughner's paranoia is its own ideology: "Forget right or left," says Kathryn Olmsted in Foreign Policy. "Loughner's particular brand of government paranoia" fits in its own, "purely all-American" category. He reportedly thinks the U.S. faked the moon landing, the Federal Reserve is a Jewish plot, and 9/11 was a U.S. job. This "toxic jumble of left- and right-wing conspiracy theories" doesn't fit comfortably in either party, but it's also, unfortunately, not as fringy as before.

And, as Weekly Standard's John McCormack reported at the time, Loughner’s YouTube channel “list[ed] Communist Manifesto and Mein Kampf among his favorite books, and a video of a person in a mask burning an American flag is listed as a "favorite" on his YouTube page.”