Less than two hours before the Trump-Kim summit in Singapore, MSNBC’s Hardball host Chris Matthews and panelists Elise Jordan and Bobby Ghosh declared that President Trump is a “wannabe despot” who wants to “fulfill his fantasy” by ruling the country with an iron fist while having more affection for dictators like North Korea’s Kim Jong-un than U.S. allies.

Matthews first observed to Jordan that Trump “sits four or five feet from our ally in the north, that’s, of course, Canada and Trudeau, who causes us no trouble and then you see him huddling in these pictures of huddling with the other guy, with Putin.” Jordan replied that “[h]e can relate.”

“Donald Trump can relate to authoritarians. He, as a former businessman, he likes absolute control and we’ve seen,” she added.

Matthews followed up and asked if Trump’s a “wannabe despot,” and the anti-Trump Republican agreed and “conceded that for years now and we're going on years.”

She elaborated that her belief was due to “[a]ll of his behavior, his attacks on the free press, his attacks on alliances that are designed to strengthen our security, this is not — he has — he feels more — he calls Kim Jong-un honorable, yet Justin Trudeau of Canada” is ridiculed.

Ghosh interjected that Trump is indeed “a wanna-be despot” and while Congress should stop him from doing so (read: remove him from office), they haven’t and instead “are tolerating it, encouraging it, enabling it.”

“They’re behaving in a way people behave in a monarchy or a despotism,” Matthews stated.

The liberal pundit then proceeded by taking note of the North Korean regime’s brutal human rights record as a way to (in order to borrow a favorite phrase of the media to describe Mueller probe criticism) undermine the summit, which is actually okay.

The problem is that perhaps Matthews’s colleagues at NBC shouldn’t have been so glowing in their praise for North Korea during the Pyeongchang Olympic games (see examples here, here, and here).

To see the relevant transcript from MSNBC’s Hardball on June 11, click “expand.” 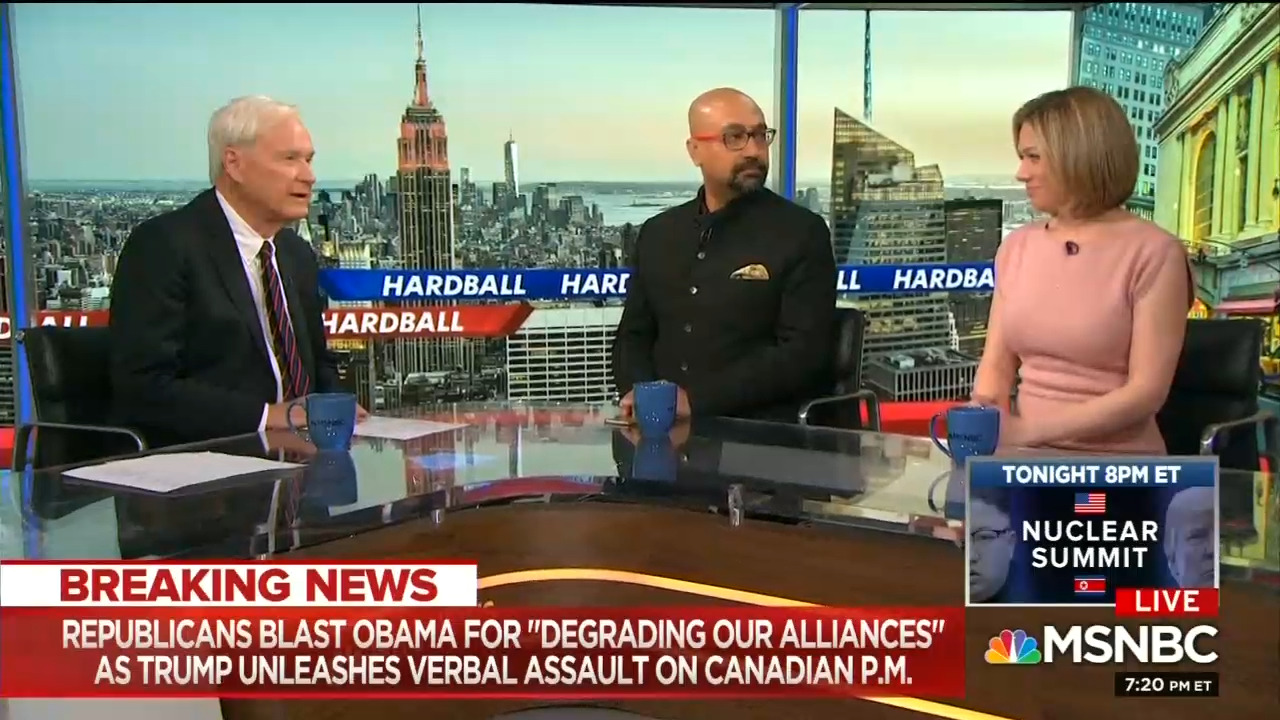 CHRIS MATTHEWS: Elise, again, we're focusing on how Trump has been able to define the Republican Party, 180 from its roots. It's now a protectionist party. It's not an alliance building party. It's not a deficit reduction party. I don’t know where it squares.

ELISE JORDAN: Well, you’re seeing Republicans — they're going to stay silent certainly through the midterm elections and Donald Trump has actually gained in approval and is at about 44 percent with his strongest supporters. And so Republicans are literally petrified —

MATTHEWS: He is at 86 percent.

JORDAN: — and they cower. They are going to cower from Donald Trump. What we saw on display at the G7 was classic Donald Trump. He does not like our allies who are about —

MATTHEWS: Using geography to make your point, Elise, he sits four or five feet from our ally in the north, that’s, of course, Canada and Trudeau, who causes us no trouble and then you see him huddling in these pictures of huddling with the other guy, with Putin. You know, it's really, a statement.

JORDAN: He can relate.

JORDAN: Donald Trump can relate to authoritarians. He, as a former businessman, he likes absolute control and we’ve seen

MATTHEWS: Is he a wannabe despot?

JORDAN: I've conceded that for years now and we're going on years. All of his behavior, his attacks on the free press, his attacks on alliances that are designed to strengthen our security, this is not — he has — he feels more — he calls Kim Jong-un honorable, yet Justin Trudeau of Canada — [GHOSH MUMBLES]

MATTHEWS: Should go to hell.

BOBBY GHOSH: Is weak. He’s weak. He can be — he can be a wanna-be despot. He wouldn't be the first person to reach the top of a democratic country with that ambition. The Senate and Congress can't allow it, so all those other people that we just saw, the Paul Ryans and so on, they can't — they can’t sit by and watch him sort of fulfill his fantasy of wanting to be a despot.

GHOSH: Well, they oughtn't to be.

GHOSH: That's the more — that’s the more surprising thing to me. It's not that Donald Trump wants to behave like a despot. It's that all of these other people who ought to know better are tolerating it, encouraging it —

MATTHEWS: They’re behaving in a way —

MATTHEWS: — people behave in a monarchy or a despotism.

GHOSH: That’s a good way to think of it.

MATTHEWS: You know, North Korea is known to be one of the most repressive and brutal regimes in history. As NBC News noted today, the regime” has committed unspeakable atrocities in a vast scale reminiscent of Nazi journey, according to a 2014 united nations investigation.” However, we’re learning today that President Trump does not intend to address the issue of human rights. According to two administration officials, “the U.S. has decided not to bring up human rights at the summit.” I was told, Elise, you're not allowed to have a radio there. You're not allowed to even hear news.

JORDAN: Well, I mean, comparing the regime to atrocities in Nazi Germany, that is horrific, it's sickening and we're just going to sit down with him without a mention of that and, you know, look at all of the criticism of the Iran nuclear deal and the negotiations surrounding that. And the Republican Parties — the Republican party was so upset about just keeping the they're — the narrow confines of the deal to the nuclear agreement. What about this, though?