Well, that didn’t take long. Minutes before President Trump’s first State of the Union address on Tuesday, the major broadcast networks pulled out the long knives to attack the “embattled” and “deeply unpopular” President leading a GOP that’s “paying the political price in recent special elections” for a presidency whom people believe is working “against them.”

ABC’s coverage was absolutely vicious, led by chief anchor and former Clinton administration official George Stephanopoulos. Stephanopoulos declared it to be “a year of conflict and controversy” that’s “been exciting and exhausting, unusual in so many ways with a President unlike any we've seen before.”

Chief White House correspondent Jonathan Karl piled on, declaring that Congress “is as divided as has ever been during our lifetimes” and even more so than during the Clinton impeachment:

Many Democrats here in this chamber see the President as not merely somebody they disagree with, but somebody who is a danger to the Republican and then Republicans in this chamber who talk about this deep state conspiracy within the FBI to thwart this president.

Capitol Hill correspondent Mary Bruce took her own cheap shots, reiterating a popular talking point of how “deeply unpopular” Trump is in polls and thus the GOP have been “paying the political price in recent elections.” She continued:

The GOP majority here is now on the line and so, while the President tonight may try to strike more of an optimistic tone, a bipartisan tone as he tries to strike deals on everything from immigration to infrastructure to a spending deal, the reality is, he needs Democrats now in order to get anything done, in order to get his agenda through. But George, Democrats, they are already eyeing November and they hope eyeing retaking the majority.

Political analyst Matthew Dowd jumped in moments later, touting his private meeting with Trump in which he told him that “this country is as divided as it's ever been in our history.” Sorry, Matt, I think the Civil War and other periods of American history would disagree.

Nightline co-host Byron Pitts had his turn too, lambasting Trump as someone whom Americans “don’t believe not only is this President that he’s not for them” but “that he's against them.”

“You talk about those employment numbers, yes, historic. Lowest they've ever been for African-Americans, but consider this. This is the slowest drop in unemployment for blacks in five years and black unemployment is still twice that of white America. So, he has to impact those numbers before he changes minds,” he added. 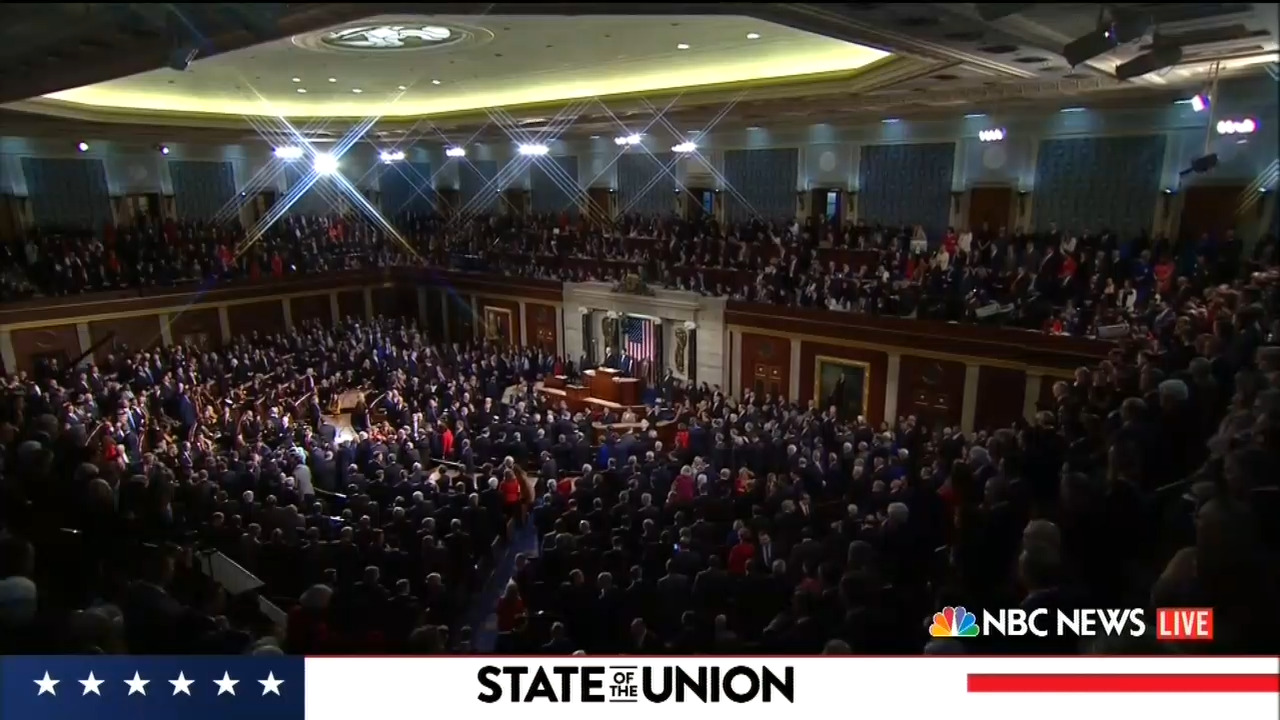 Moving over to NBC, NBC Nightly News anchor Lester Holt ruled just over a minute into the broadcast: “This is a moment of history and high drama here in Washington. An embattled President under investigation. A congress mired in partisan conflict. A government that many Americans believe is increasingly unable to function for the common good.”

Meanwhile, Today co-host Savannah Guthrie boasted of Trump’s low approval ratings while Capitol Hill correspondent Kasie Hunt held up the number of silent protests by Democrats who decided not to boycott the speech.

Not surprisingly, CBS was far more sober in its pre-speech coverage. However, one notable moments came from CBS This Morning co-host John Dickerson, who immediately wondered if Trump “will...extend an olive branch to Democrats or ask them to unify by simply agreeing with him?” Because, sure, it’s always about conservatives compromising with liberals, and not the other way around.