Host Chris Matthews set the tone by first linking the deaths and imprisonment of journalists in 2017 to President Trump. Appearing on behalf of the Reporters Committee for Freedom of the Press, Katie Townsend agreed that “[t]hese relentless attacks on the credibility of journalists, the use of the fake news term repeatedly, calling the press the enemy of the people...have real world effects.”

Democratic Senator Richard Blumenthal (Conn.) fitted in well as he reiterated a comment he previously raised, which was that “[w]hen the history of this time is written...the heroes will be our free press and the judiciary bulwarks of our democracy.”

“When the President says he won the popular vote, when he says that the crowd at inaugural was the biggest ever, the press has stood up to him,” he added, correctly pointing out the liberal media’s place in the Resistance.

Liberal Washington Post columnist Eugene Robinson joined in on the fun too, hilariously arguing that “if officials love everything you write, then you're probably not doing a very good job” because “[y]ou're supposed to hold them accountable.” Yeah, sure, Gene. This is just like all the slobbing praise you offered Barack Obama.

“What President Trump is doing is something different. He's trying to erase the line between what is true and what is not true. He wants to erase the line between reality and his own convenient fantasy, his own version of reality. To have a democracy, we have to have a chronicle of events that we all agree on and we have to have an encyclopedia of facts we all agree on,” Robinson added.

This quote was amusing since not only have most of the liberal media been unable to fire journalists who mess up, but have claimed that the Obama administration was scandal-free. Without going any further, that’s one set of so-called facts that were not all able to agree on.

Back to the segment, Townsend praised Republican Senator Jeff Flake’s speech comparing Trump to Joseph Stalin because it’s “important...that Republicans as well as Democrats speak out against this type of rhetoric” seeing as how “[t]his is a bipartisan issue or it should be or a nonpartisan issue.”

Not to be left out, Matthews vividly described an almost-childlike joy of reading The New York Times and Washington Post copies each morning and coming away “really damn informed with pretty damn objective facts.”

Blumenthal capped things off by claiming that his constituents are all “watching MSNBC,” shows like Hardball, and “reading at levels never before seen” because they’re so fearful for America’s future under Trump.

Here’s the relevant transcript from MSNBC’s Hardball on January 17: 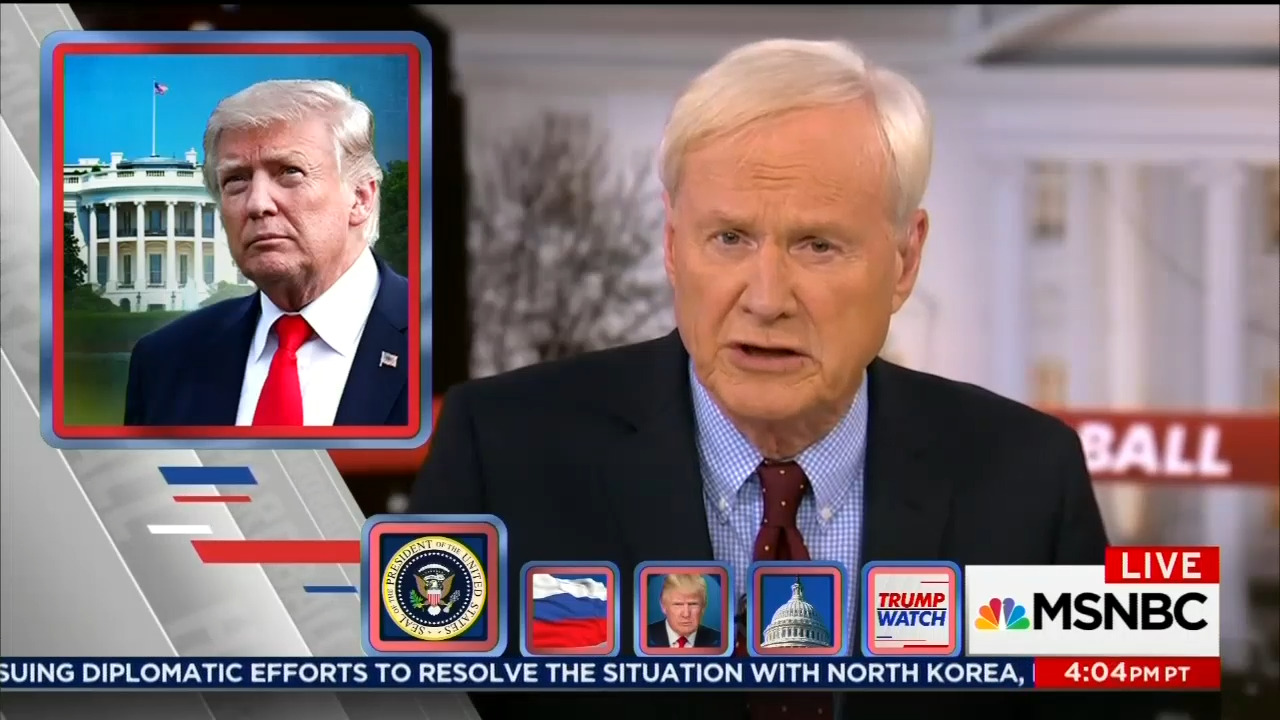 CHRIS MATTHEWS [on Huckabee Sanders criticizing Flake]: Well, that was pathetic. Anyway, then there was the theater of the absurd for weeks, the President has been teasing in an award ceremony of sorts for “THE MOST DISHONEST & CORRUPT MEDIA AWARDS OF THE YEAR.” He wrote “Subjects will cover dishonesty and bad reporting in various categories from the Fake News Media.” Last week, he wrote: “The Fake News Awards, those are going to the most corrupt and biased of the Mainstream Media, will be presented to the losers Wednesday, January 17th.” Of course, that's today. At her briefing today, Sanders promised something later today. But as of this hour, it's still a mystery what it is. That's the absurd. Here's the reality. According to the Committee to the Protect Journalists, 42 were killed last year doing their jobs. Another 262 were imprisoned, 21 arrested on charges of false news. Those were the phrase used.

MATTHEWS: Tell me what's the danger of the press, just using the press as his tackling dummy, if you will, because he doesn't like objective reporting, not opinion like Eugene. He is afraid, it seems to me, of front page facts that are thrown out there as part of regular daily reporting. He doesn't want that objective reality confronting his behavior.

KATIE TOWNSEND: These relentless attacks on the credibility of journalists, the use of the fake news term repeatedly, calling the press the enemy of the people, these have real world effects, not just here in the United States where we've seen an uptick in threats against members of the media just simply doing their jobs but also abroad. I think as both Senator McCain and Senator Flake pointed out today, the President's words matter. They have an impact when the President of the United States uses the term “fake news” to criticize reporting that he doesn't like, that language is used as a license by people like Assad in Syria, Duterte in the Philippines to call reporting — they don't like fake news. 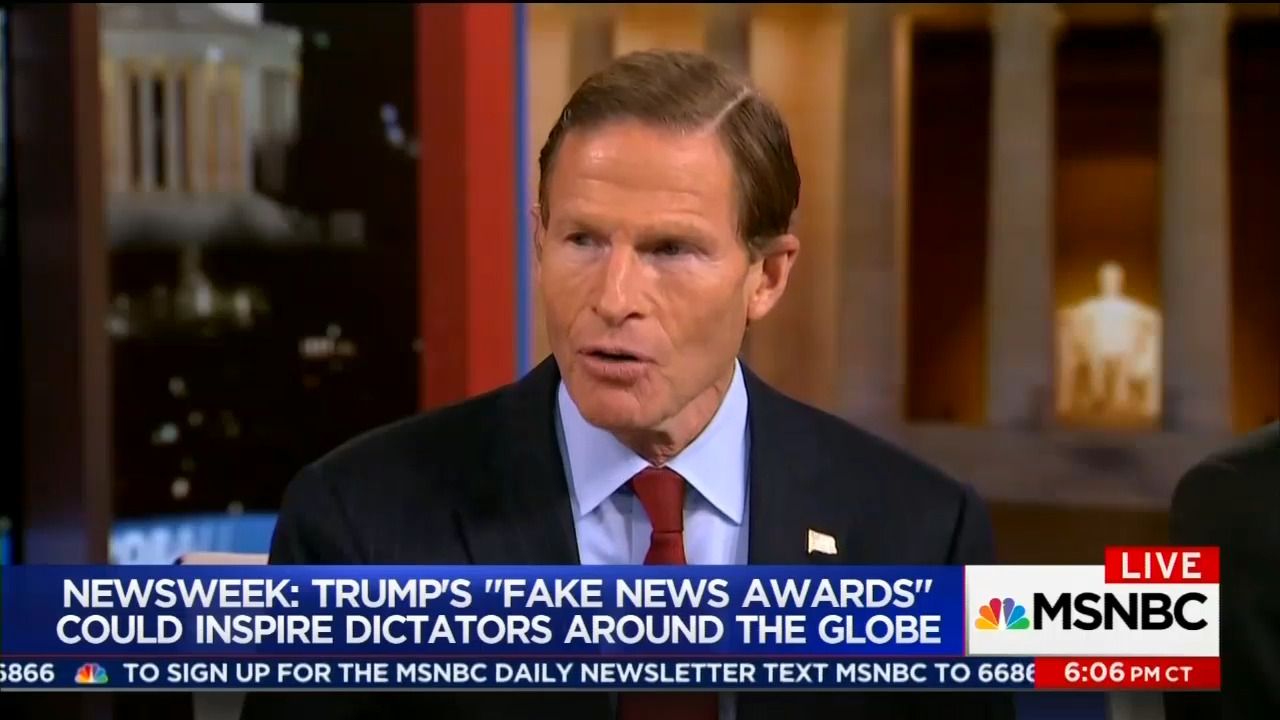 DEMOCRATIC SENATOR RICHARD BLUMENTHAL (Conn.): When the history of this time is written, Chris and I've said it before on this very show, the heroes will be our free press and the judiciary bulwarks of our democracy. When the President says he won the popular vote, when he says that the crowd at inaugural was the biggest ever, the press has stood up to him. Think about what we would not know now about Russian meddling in our election, about the attempts to cover up and obstruct justice, whether it's the Air Force One statement or the Trump Tower meeting, and Katie is absolutely right. The real world effects are staggering, not only abroad where 262 journalists have been imprisoned over the last year alone, the most dangerous year to be a journalist in the world[.]

EUGENE ROBINSON: You and I have been doing this for a long time. As a journalist you have to have a thick skin, right? You have to a thick skin because guess what, if officials love everything you write, then you're probably not doing a very good job. You're supposed to hold them accountable. What President Trump is doing is something different. He's trying to erase the line between what is true and what is not true. He wants to erase the line between reality and his own convenient fantasy, his own version of reality. To have a democracy, we have to have a chronicle of events that we all agree on and we have to have an encyclopedia of facts we all agree on and then we can argue what to do with those things and what those events mean and what those facts mean. But — but he's trying to warp reality to suit his own political purposes, and his own ego half the time. I think it's more psychological than political, but it's very dangerous.

TOWNSEND: Well, Chris, I think that and I want to underscore too that Senator Flake is absolutely right in how important it is that Republicans as well as Democrats speak out against this type of rhetoric. This is a bipartisan issue or it should be or a nonpartisan issue. Press freedom is not only a bulwark of American democracy, but it's also, I would say, an American value. And I think in terms of what needs to be done, as I said, we've seen the uptick in threats against journalists, not only threats to take them to court but physical threats and physical attacks on journalists not just abroad but here in the United States and so I think this rhetoric we're seeing from the President underscores precisely why it's important for organizations like ours to continue to support journalists. 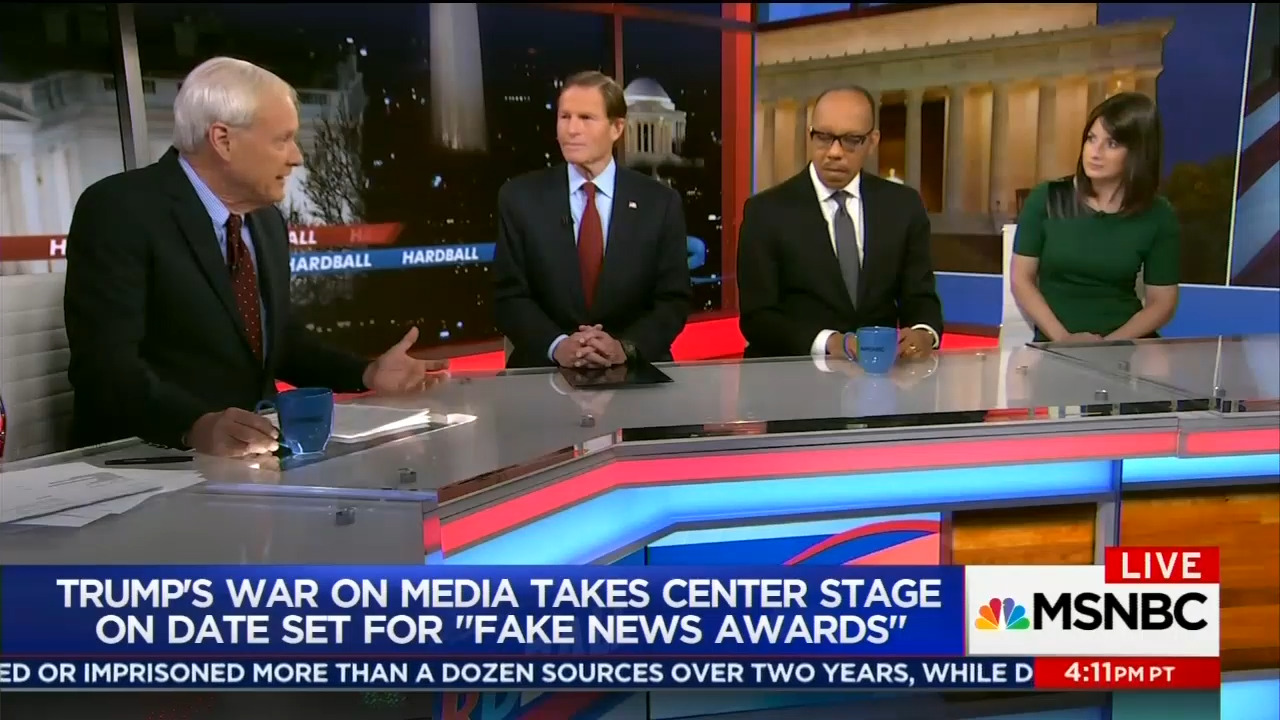 MATTHEWS: Well, I'm telling you as a consumer of print, you're a consumer like him. You get up and have your coffee at 7:00 in the morning usually and you look at papers like The New York Times, which is an amazing newspaper, it covers the world and it's all there in print. You just open it up. The whole world — it covers everything. You get The Washington Post with the best political coverage. It's all over the coverage. You learn so much in maybe an hour at the breakfast table. By the time you've had your cereal and coffee, you are really damn informed with pretty damn objective facts. I don't know anywhere in the world we benefit from this system and to have this clownish leader making fun of one of the best things we have in the country as a free press, it's wonderful especially if you have curiosity like we all do. We want to know what’s going on.

BLUMENTHAL: I think that dismissing it as a clown show is a disservice to how threatening and how dangerous it really is because it is undermining and corrosive to our democracy and the real threat here is that people will lose faith although frankly, what I hear in Connecticut is that folks are watching MSNBC.

BLUMENTHAL: They're watching this show. They’re watching other cable. They're reading at levels never before seen, and I think it is that kind of reaction that should be inspiring to many of us.