On Wednesday, MSNBC’s AM Joy host and far-left charlatan Joy Reid found herself in hot water for claiming (thanks to the liberal site RawStory.com) that National Review’s David French should be ashamed of himself for penning a story excusing the prospect of nuclear war because “it will only kill Democrats and minorities.”

Naturally this cockamamie claim and quote were simply not true. Here’s Reid’s full attack (which has since been deleted from Twitter): 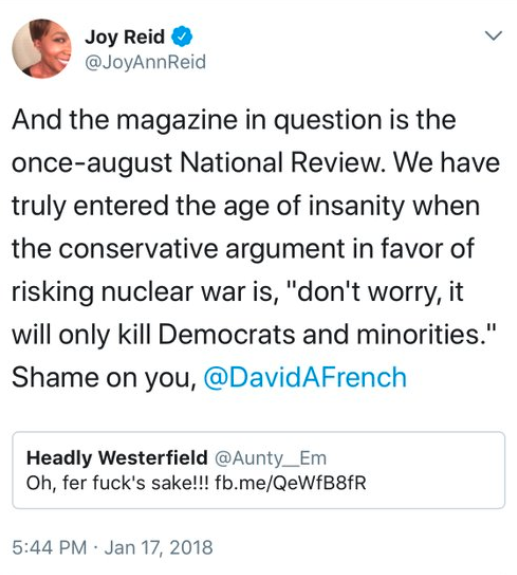 A few hours later, French responded that “[i]n the annals of misleading and ridiculous tweets, this takes the cake” because he, in his words, “wrote only in favor of prepping for bad events” along with never having stated anywhere that he’s in favor of nuclear war.

Hot Air pointed out that he simply noted that the target of a nuclear weapon (presumably from North Korea) would strike Hawaii and/or New York City. Quite simply, that’s a fact a missile would have far less to travel for the fledgling regime if they sent it to Hawaii. As for New York City, it’s America’s largest city and North Korea has long fantasized about taking out large cities.

This attack harkened back to the one Reid unleashed on this writer back in July when she told me that I was ugly, hated Jesus, and “represent the Foulest Tradition” after tweeting at her for flip-flopping on loving/hating Republican Senator John McCain (Ariz.).

At any rate, our friends at Hot Air, Townhall, Twitchy, the Washington Free Beacon, and others noted that tsunami of rebukes deservedly lobbed in Reid’s direction. Early Wednesday night, French responded in a formal blog post:

I said nothing of the sort. Not only did I say nothing like that, I can’t imagine saying anything like that. It’s not only antithetical to my deepest beliefs, it’s directly contradicted by two long pieces I’ve written that were specifically intended to highlight the horrific risks of an all-out conflict with North Korea.

During my time in the Army, I deployed to South Korea briefly during Operation Key Resolve in 2010. I sat in a bunker for hours watching the projected casualty counts from a North Korean invasion mount up to truly terrifying levels. I’m a veteran of the Iraq War and grieve still for lost friends. You don’t need to tell me that war is hell.

The strange part of this is I actually know Joy. We’ve talked, I’ve been on her show, and while I disagree with her politics, I’ve found her to be perfectly pleasant and civil. Others have had different experiences, unfortunately. But I’ll hold out a shred of hope. Perhaps she’ll actually read my post, realize her mistake, and apologize. If she does, I’m happy to forgive her and move on. Until then, MSNBC should know that one of its hosts is making things up. It’s a smear, pure and simple. There is no excuse.

Reid eventually offered a response that can be judged as milk toast at best: 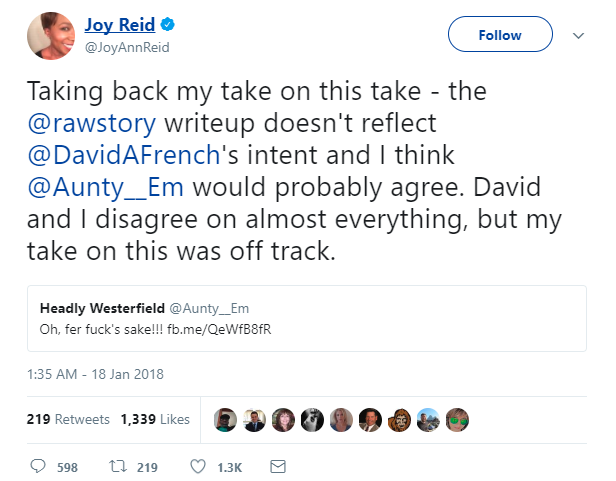 What ever happened to just saying, “I’m sorry?” Oh, that’s right, apologies are so old-school in this day and age.