Fire and Fury author Michael Wolff stopped by Tuesday’s Hardball for his latest interview and he used the chance to lament with host Chris Matthews that it’s “a tragedy” that Steve Bannon has been ousted from Breitbart but Donald Trump hasn’t been removed from the presidency.

Right off the bat, Matthews pushed some fake news in wondering what Wolff made about the Bannon news, asserting that “Bannon is gone from Breitbart,” which is a “thing he created.”

Unless Matthews has been living under a rock in the Potomac, Breitbart has its name because it was founded by the late Andrew Breitbart. A basic Google search would tell you that, but perhaps we should cut Chris some slack since he might have something else on his mind.

Wolff rolled with the question anyway, responding that “I'm thinking that the — that the real villain of the book who is Donald Trump is still ensconced in the White House. So it's a — it’s a little bit of a tragedy here.”

Matthews asked “for whom” this is “a tragedy” and Wolff responded that it’s “a tragedy” “for the American people” that Bannon is gone while Trump stays in office. Again, this is a guy who claimed that he “has no political agenda.”

Behind this, in being the most interesting part in the interview, was Matthews’s praise for the controversial and error-laden book by a man he deemed a modern-day Joe McGinniss, claiming that he “love[s] the facts in your book because it is a non-fiction book with a lot of facts.”

“We can argue around the edges, but the facts are like giant blocks of reality,” Matthews foolishly claimed.

Also during the segment, the MSNBC host blasted Trump for “trying to create a Potemkin village” in the form of the bipartisan immigration meeting “to offset the portrait” spun in Wolff’s book. Wolff agreed, stating that it was “the weirdest thing I've ever seen.”

Later, after he insinuated that Trump was like a Twilight Zone character with special powers who could “kill anybody he wanted to” if he wasn’t sufficiently praised, Matthews turned to “the cold, scary part of your book” about Trump’s mental well-being.

Matthews wondered if Trump was able to “show reasonable judgment, coolness under pressure, and recognition of consequences by the people around him,” to which Wolff not surprisingly replied was not possible.

To cap off the lovefest, Matthews responded to Wolff’s point about how Bannon and Reince Priebus became surprising allies in the White House by resurrecting his quip about Jared Kushner and Ivanka Trump being the U.S. equivalent of Saddam Hussein’s murderous sons: “I guess when you're dealing with Uday and Qusay every day, you do find common purposes.”

Here’s the relevant transcript from MSNBC’s Hardball on January 9: 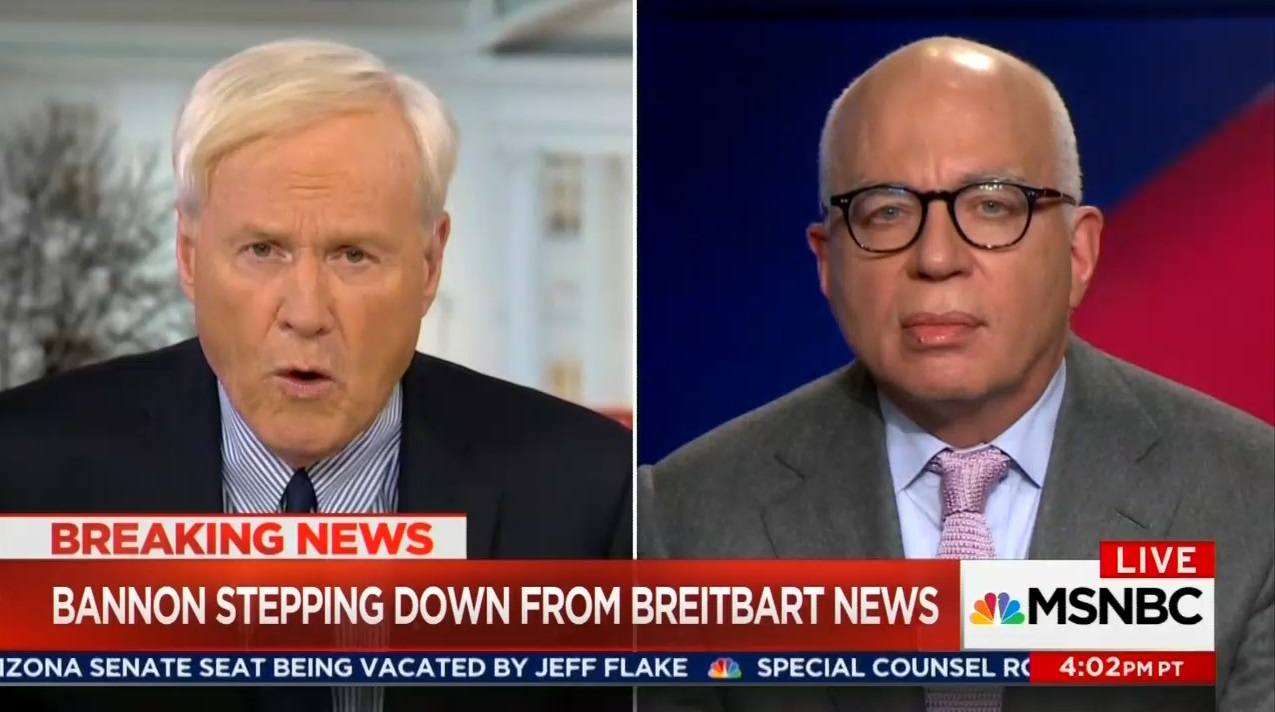 CHRIS MATTHEWS: Michael, what do you think when you watch this today with the announcement that Trum [sic] — that Bannon is gone from Breitbart? His post, the thing he created?

MICHAEL WOLFF: I'm thinking that the — that the real villain of the book who is Donald Trump is still ensconced in the White House. So it's a — it’s a little bit of a tragedy here.

MATTHEWS: For the country?

WOLFF: For the American people, yes.

MATTHEWS: Let me ask you about the President's performance today. Out of nowhere, a press spray that usually lasts in the seconds, where they let the cameras in, he makes some burping sounds to the press, and they're gone. This time, I thought, to make up for the portrayal you have given of him — given of him in the book, and maybe a very accurate one, he tried to show a very different picture of an equanimity — of a calm, collected, reasonable, open to the negotiations, perfect being out there, just for the cameras. Do you think he's trying to create a Potemkin village to offset the portrait you wrote in the book?

WOLFF: Yeah. Absolutely. I mean — there could — what else could there be here? I mean, remember, just the other day, he was just assuring us that he was — he was sane and stable, so this is — this is the weirdest thing I've ever seen.

MATTHEWS: It reminds me of that Twilight episode, way back in the 60s, where there’s this kid with auto-kinetic powers. Ferocious kid with no mental or emotional development, who can kill anybody he wanted to, destroy their lives terrifically, and everybody just pandered to him, pacified him. It’s like there’s an eight-year-old in that West Wing, and everybody around him is scared to death he’ll do something really destructive if they don’t please him that moment. Did you see that Twilight episode back then? Cause that’s what it reminds me of.

WOLFF: I certainly did. We're of a similar generation, but I think it's a little different than that. 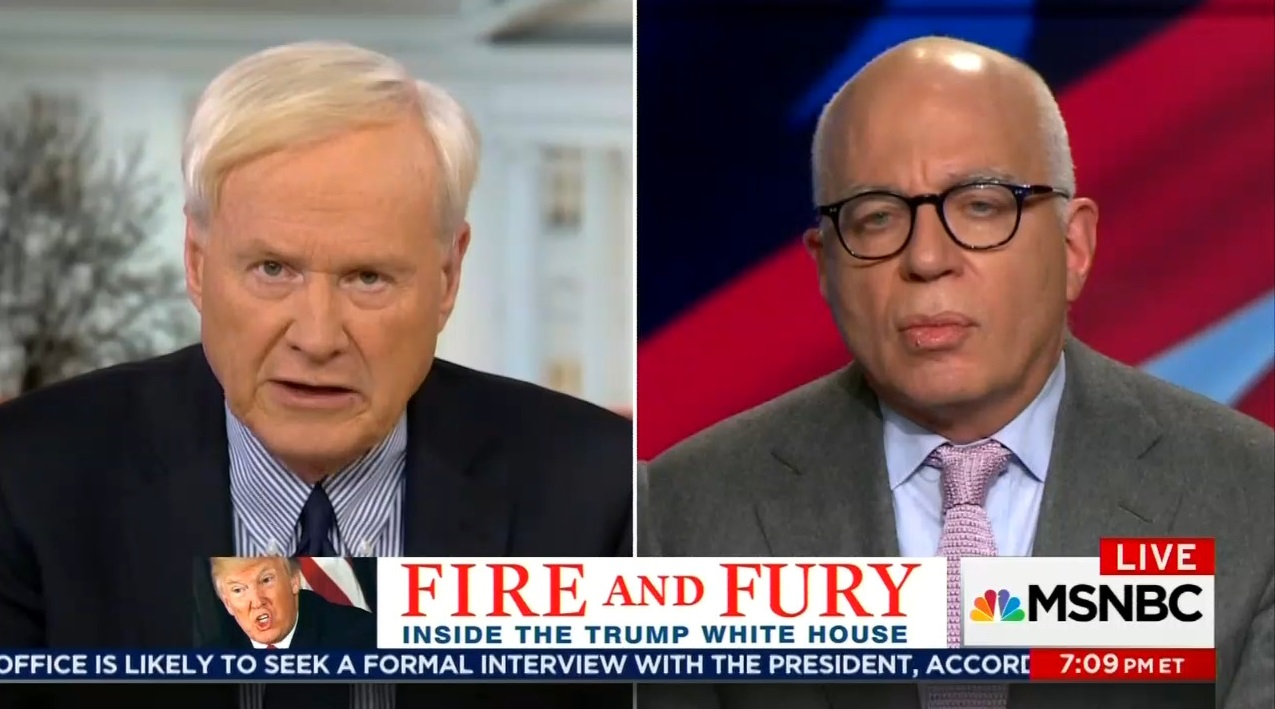 MATTHEWS: And now we come to the cold, scary part of your book. The fitness question. It seems to me, and I thought about this no — just a couple of moments, I think it's what most people would come to mind if they're thinking about, what does a president have to be....Does Trump have the ability to show reasonable judgment, coolness under pressure, and recognition of consequences by the people around him?

WOLFF: He — I think that's a — that's a — a fine and perfect list and on each point, he does not have that attribute.

MATTHEWS: Let's talk about the thing that — I love the facts in your book because it is a non-fiction book with a lot of facts. We can argue around the edges, but the facts are like giant blocks of reality.

MATTHEWS: By the way, you remind me of the great reporter, Joe McGinniss, who really started this behind-the-lines kind of reporting with Jeffrey MacDonald, before that with the Nixon people and selling of the press, where he went in there and had an indefinite role, nobody knew who he was, but somehow he got clearance, and somehow, thanks to Roger Ailes and other people, he told the whole story of how Nixon put together that phoney baloney campaign in '68. 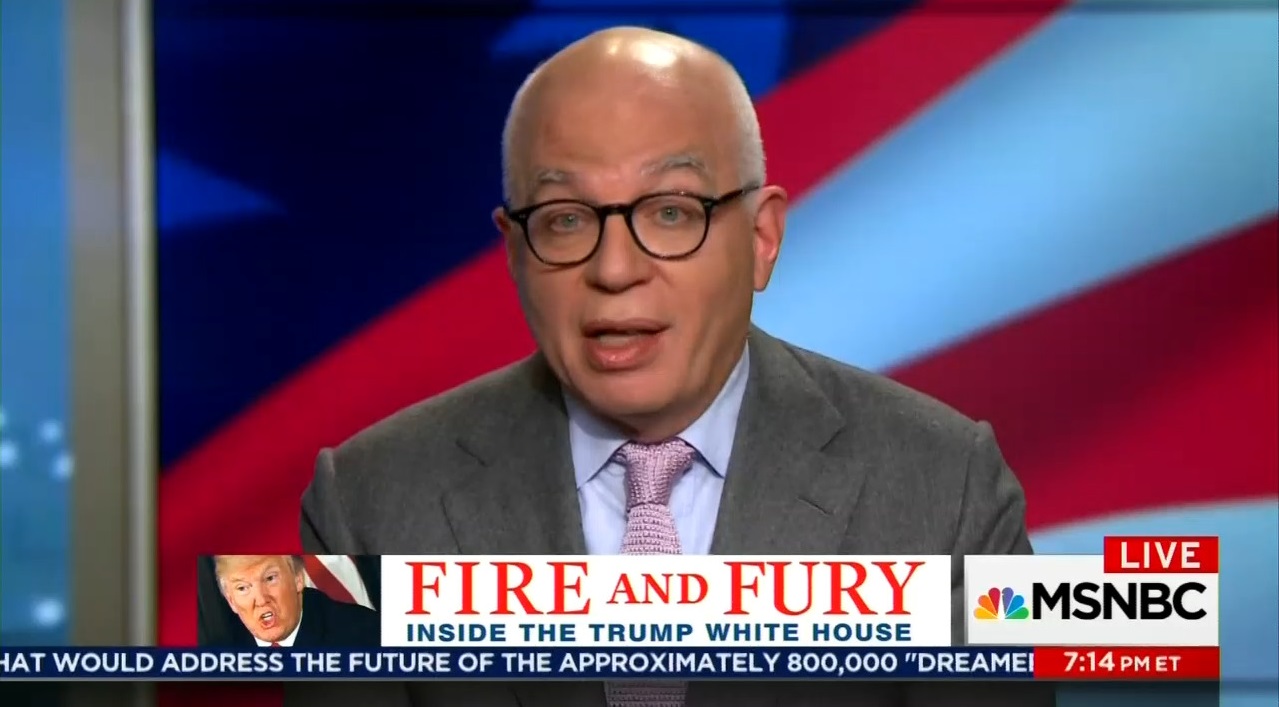 WOLFF:  But gradually, it was actually Priebus and — Reince Priebus and Steve Bannon had an enormous amount of — they were polarized, let's say in the early months of the administration and they actually came together.

MATTHEWS: I saw that.

WOLFF: I think that they became quite good friends, because they understood. They understood this was a — this was an entirely anomalymous [sic] situation that they had found themselves in and it was coming apart.

MATTHEWS: I guess when you're dealing with Uday and Qusay every day, you do find common purposes.