On Sunday night, MSNBC’s Ali Velshi showcased his desire to not let a deadly crisis like Hurricane Irma go to waste, reaffirming his belief that it’s appropriate to discuss climate change as the cause of hurricanes like Irma while lives were at stake.

Velshi made this pathetic proclamation during a Twitter debate with The Hill’s Joe Concha, who had tweeted that the media had largely been doing their job when it came to the hurricane.

“Reporting on this horrific hurricane across all the cable news networks has been superb. No editorial. All facts. And explained perfectly,” Concha tweeted (as he would later clarify to mean reporters on the ground).

For as much as this space criticizes the liberal media, Concha was exactly right. Both during Harvey and Irma, TV reporters braving the hurricanes were compassionate, professional, and smart in both interactions with the public and reports to viewers.

However, the liberal journalists straying into political territory were confined to comfy, safe studios in New York City and Washington. Needless to say, Velshi fell in that camp as he tweeted back to Concha following a reader’s reply:

Concha calmly replied that there was a “[t]ime and a place for that conversation...[b]ut while people’s homes & business are being devastated isn’t that time.”

When Velshi hit back that “I think this is the perfect time to have that discussion,” Concha seemed exasperated: 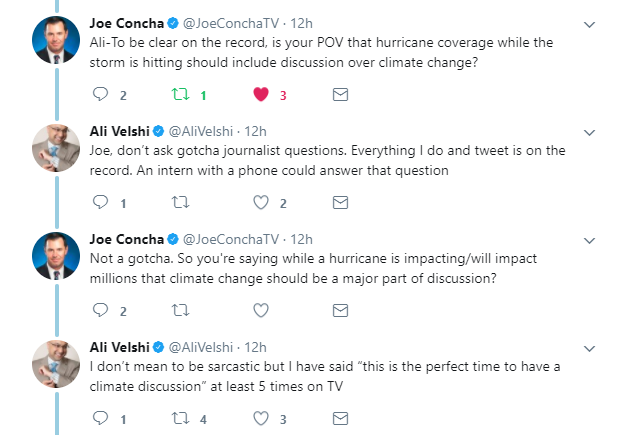 The Hill’s media reporter thanked Velshi for clearing this all up by solidifying his Rahm Emanuel-like motives, but the former Al Jazerra host couldn’t let it go:

Just as the left largely congregates to gun control after a shooting while people lay dead, many of those same folks can’t help but talk up global warming while lives are at risk from flooding, high winds, storm surge, and tornadoes. And this doesn’t even touch the fact that these storms have been causing catastrophic damage for centuries.

People can debate the issue like any other topic, but as Concha astutely argued, the day of landfall isn’t the time for that.