Liberal CNNers Claim Country Is ‘Scared’ of Trump, Reagan Had Alzheimer’s While President

If the late Tuesday and early Wednesday Don Lemon-led CNN Tonight wouldn’t go down in infamy for its deranged reaction to President Trump’s Arizona rally, the 1:00 a.m. hour drove the nail in the coffin.

It was just past the 1:08 a.m. Eastern mark when Lemon promoted fake news about Reagan:

LEMON: You think the media and people should have pretended Ronald Reagan wasn't in the early stages of Alzheimer’s in the last part of his presidency? Which he was. Which —

FERGUSON: Hold on. What does any of that have to do with anything about Donald Trump?

LEMON: Because we saw it. 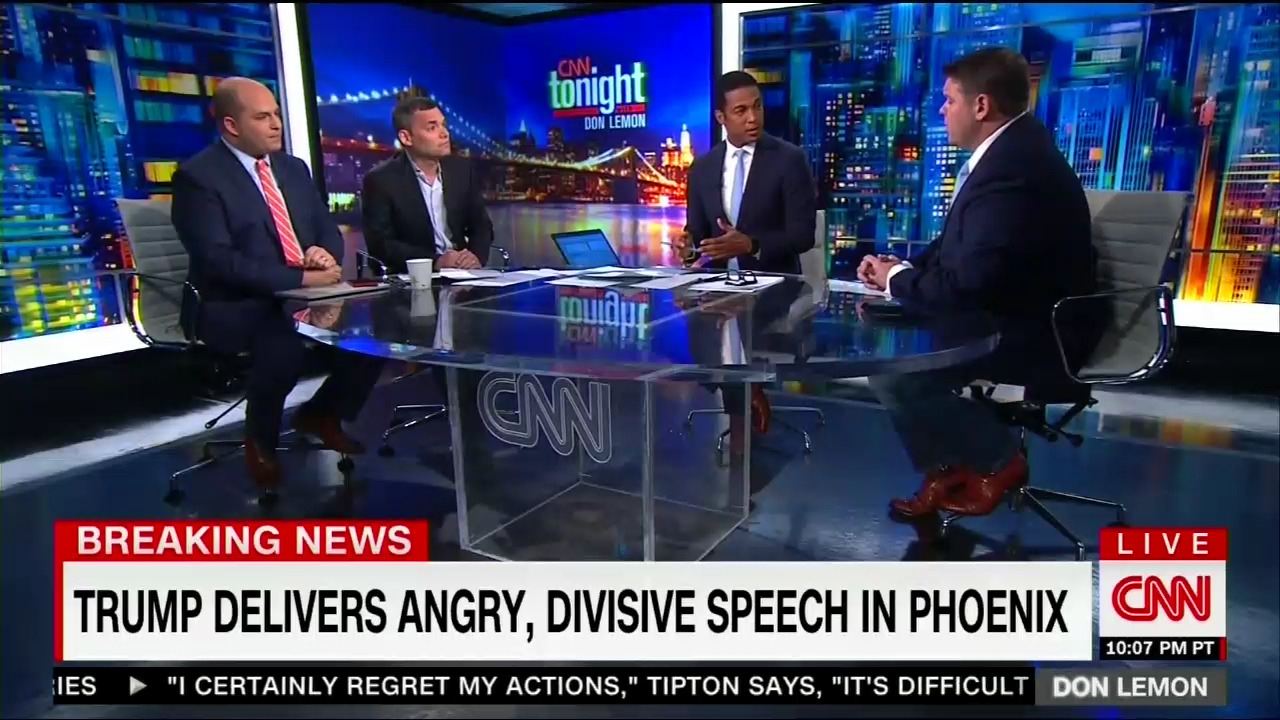 When Ferguson continued to push back, Lemon asserted that random people like himself were within their means to offer mental medical diagnoses of the President:

I’m saying that people have the right and they’re smart enough to be able to assess someone’s behavior without you saying that it’s partisan. This is not partisan. We're — we’re assessing the behavior of the President who’s in the highest office of the land.

Lemon contradicted himself there, but that’s for later. As for the Reagan accusation, the claim was promulgated in the last few years by Bill O’Reilly in Killing Reagan.

He had no serious health problems before his Alzheimer’s diagnosis in 1994 (although he was thrown by a horse in July 1989, requiring an operation to relieve pressure on his brain. Nancy thought there was a correlation between the fall and his Alzheimer’s). Reagan did not despair over his disease, believing that even something that robbed him of everything was part of God’s plan. Sitting at his desk at home, he wrote to the world of his affliction, expressing the hope that a public letter would encourage “a clearer understanding” of Alzheimer’s, while lamenting the “heavy burden” it would impose on Nancy. He ended as he had always ended his public addresses, thanking his fellow Americans and asking God to “always bless you.”

What’s even more pathetic is Lemon and The Atlantic’s Peter Beinart praised Reagan throughout the hour as someone who never exhibited the same behavior as the current President to show that Reagan showed class. So, what is it, Don? He was either someone unfit with Alzheimer’s or a symbol of presidency dignity?

Anyway, back to the top of the hour. After Stelter lost it over the Trump rally being “poisonous” and applauded the amateur-hour discussion of Trump’s mental health, Ferguson unleashed as he declared that he “would love to help take all you guys down to rehab and literally check you in for the most ridiculous over reaction that I have seen by people saying things like he’s unhinged.”

Ferguson called them out for trying to play “doctor” and declare him mental ill. When Lemon tried to wiggle out, Ferguson responded by calling the media out for “undermin[ing] the President of the United States because you don't like what he said in his speech tonight that he is somehow unfit to be commander-in-chief.

Lemon proudly trumpeted well-known liar and former Director of National Intelligence James Clapper saying he’s scared of Trump being a national security threat, but Ferguson noted that he can “disagree with him” but “not...say he’s unhinged.”

“I'm not going to say that Clapper is crazy or Clapper needs to go to the hospital or Clapper is somewhow not fit to be national TV because he's obviously crazy, I disagree with him politically. That doesn't mean he's unfit,” he added.

Lemon again lied that “[n]obody said that about the President,” but the real fight came when the conservative talk radio host absolutely cleaned Stelter’s clock by unmasking the Reliable Sources host’s partisanship and eye-rolling fear of the President. 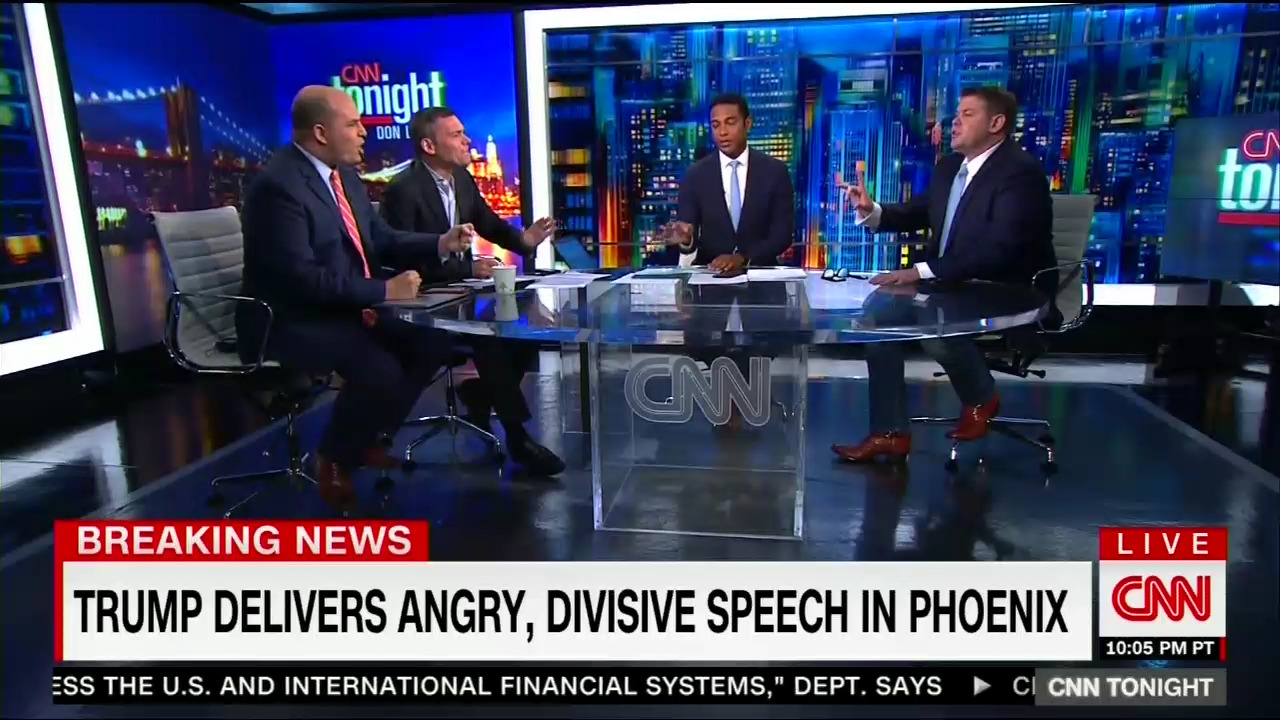 Once Lemon peddled Stetler’s claim that droves of people are questioning Trump’s stability off camera and noted Republican Senator Bob Corker’s public remarks hinting at this notion, the fight was on:

FERGUSON: Look, I will say this about Bob Corker, I think Bob Corker and many of these establishment RINO Republicans [SANERS LAUGHING] don't have the guts to come out and say it publicly. Let me at least finish.

FERGUSON: No. They’re no. If you are scared, grow up. You're a United States senator.

STELTER: But we are scared, Ben! There are viewers tonight who are scared.

FERGUSON: Don't be a child and undermine the president.

LEMON: One at a time. Quickly make your point, please.

STELTER: Are you not ever worried about his fitness?

STELTER: Don’t do the snowflake. We’re all grown-ups. You don’t need to do that.

FERGUSON: I don't need someone to put me to bed tonight. I'm a grown adult. Brian, Brian, you're saying aren't you scared?

STELTER: Because many Americans are —

FERGUSON: Let me look at the camera.

STELTER: — including James Clapper, including past presidents.

FERGUSON: Look I'm not scared and a majority of Americans are not scared. You’re trying to make this into something it's not.

Once Beinart engaged in some sudden respect for not only Reagan by former President George W. Bush and that it’s “inconceivable” that either one would act like Trump, Ferguson used his own words against him.

On the same show that Brian Stelter and friends decried the President questioning whether journalists love America, former Bernie Sanders official Symone Sanders seconds later declared that people must decide whether to stand with America or the President.

Funny how hypocrisy works. To paraphrase WMAL’s Chris Plante says, liberals wouldn’t have any standards if it weren’t for hypocrisy.

Returning to Lemon, he again contradicted his show by stating that this topic of Trump’s mental health “it doesn’t necessarily mean impeachment or driving someone from office, it means restraining him.” Sure, Don. Removing the President through the 25th Amendment would drive him from office. Plain and simple.

Former RNC official and political commentator Mike Shields did yeoman’s work in the midnight hour fighting back alone against the crazy train, so it was refreshing to see that he had some help in Ferguson for the final hour.

Lemon turned to Shields around 1:12 a.m. Eastern and again contradicted his banter about “people hav[ing] the right...to be able to assess someone’s behavior” when he told Shields this: “And Mike Shields, people are not — we’re not sitting here diagnosing — you said that earlier — diagnosing the President, we’re analyzing a speech. No one is giving a medical diagnosis of this President.”

Shields responded like he did in the previous hour, which was in a calm and sober tone:

Well, I beg to differ, that there was a conversation at the beginning about ten or 15 minutes long people were literally saying he’s insane. We’ve got to get him out of office. Rick Wilson and Maria were saying — I mean, they were going so far...What I ask of the media is if the President of the United States is going to lambaste the media, what's the media done for 10 to 15 years so that anyone would believe what he's saying? Why — why don’t they look inwards? Why wouldn’t this President was elected, did the media not stop and ask themselves, you know what? We've been coming from a left-hand side....So, they blame the President for attacking the media, which is, I think, what many people believe is why the media then calls him insane because they feel personally attacked. Right? For the President to be able to do that, why — why would anyone believe him? Why isn’t the media accountable to itself? 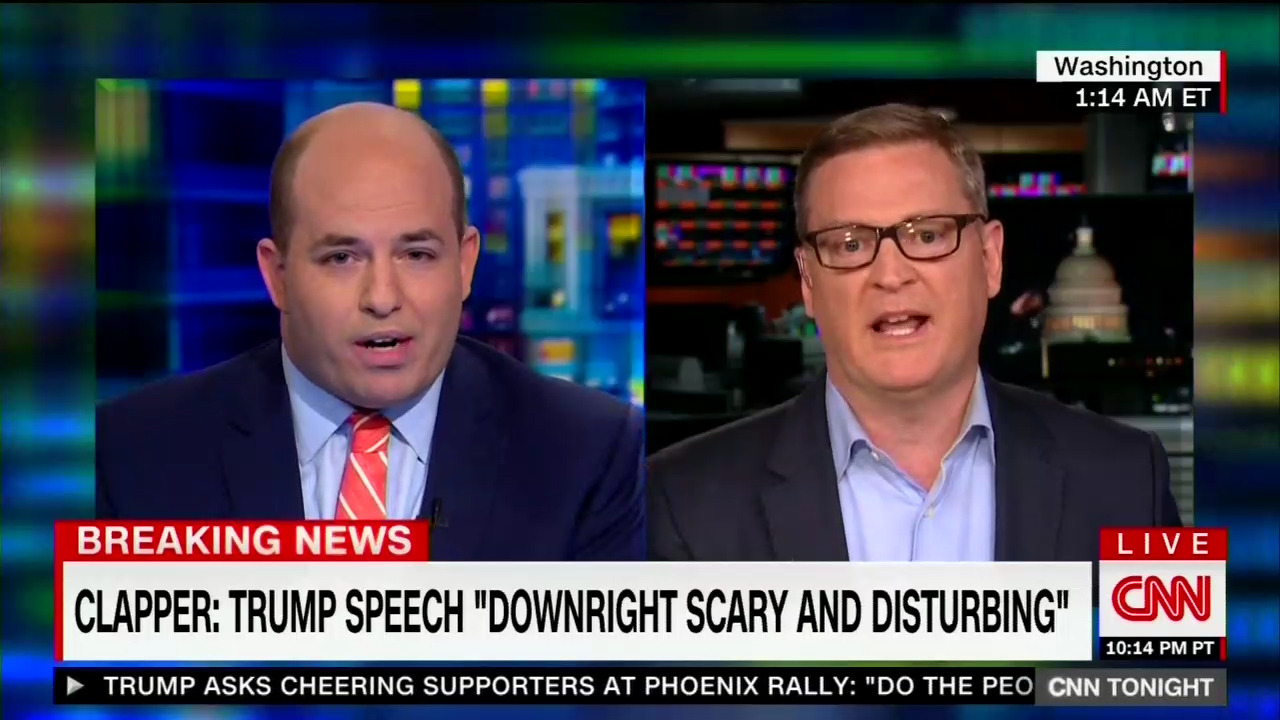 This provoked Stelter and, once again, the CNN senior media correspondent got shellacked:

STELTER: The media doesn't call him insane. There is no such thing as the media —

FERGUSON: They imply it everyday.

STELTER: — individual — individual commentators, Rick Wilson hates trump has for two years. They may say things like that about the President. It doesn't mean the media says it or it doesn’t mean CNN says it. It doesn’t mean a news organization is saying it. But the President did tonight call the press liars, sick people, and crooked. He said I really think they don't like our country. That's not presidential. It just isn’t and you know it!

SHIELDS: Brian, can I ask you a question on that? I know, but —

STELTER: You know George W. Bush wouldn't have done that.

SHIELDS: I agree with you but let me ask you a question. So, there's polling out that shows a huge number — huge number of Republicans over 80 percent distrust the media.

SHIELDS: Over half of Democrats distrust the media. That didn't happen when Donald Trump got inaugurated.

STELTER: I agree with you. We need to do more soul searching about that. But polls also show that more Americans, when forced to choose —

SHEILDS: I don't see that soul-searching anywhere. What I see —

STELTER: That’s a fair point, but when the Americans are forced to choose between the press and the President, which is a false choice as it shouldn’t be offered, but when pollsters offer it, more Americans say they trust the media over President Trump. He has a fantastically problematic low approval rating and a low credibility rating.

SHIELDS: Then you shouldn’t worry when he criticizes you. You should say no one believes you.

Stelter’s claim about individual commentators not representing the network is misleading. Rick Wilson was not the only person questioning Trump’s mental health. Stelter himself did that on Sunday and has since been joined by CNN colleagues and guests that include (but are not limited) to Kurt Bardella, Beinart, Maria Cardona, Caroline Heldman, Lemon, Ana Navarro, and Bakari Sellers.

Sorry, Brian, but that’s not an isolated opinion. That’s a network-push to condemn Trump and remove him from office based on an amateurishly offensive discussion about mental health (as The Federalist’s Gabriel Malor tweeted on Wednesday).