The liberal media never help themselves, do they? Late Monday night, they showed just how shamelessly hypocritical they are when it comes to civility, trashing cancer-stricken Republican Senator John McCain (Ariz.) as someone who would send millions to their deaths by voting on the motion to proceed for repealing and replacing ObamaCare.

The Atlantic’s and CNN senior political analyst Ron Brownstein is supposed to be neutral arbiter but alas, that’s not how someone in the opposition party actually behaves. Brownstein wrote this on Twitter: 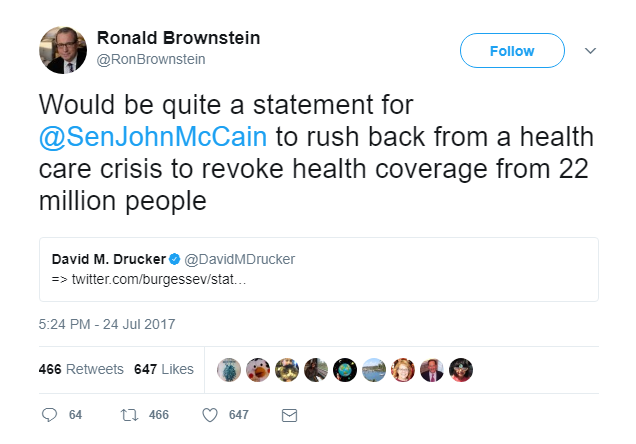 These other journalists have long track records as partisans, but they nonetheless reminded everyone how little class they have. Mother Jones Washington bureau chief David Corn tweeted this: “Will cancer-stricken @SenJohnMcCain help a draft-dodger who called him a loser take health care from millions? Then this will be his legacy.”

MSNBC host and far-left host Joy Reid tweeted on Tuesday after McCain did indeed cast a yes vote: “So it happened. McCain returned to the Senate to a standing ovation, and promptly voted to take away millions of people’s healthcare.”

New Republic’s Jeet Heer was even worse, uncorking this piece of lunacy: 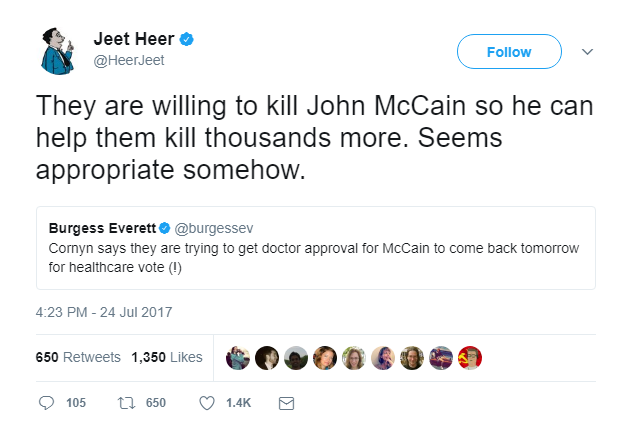 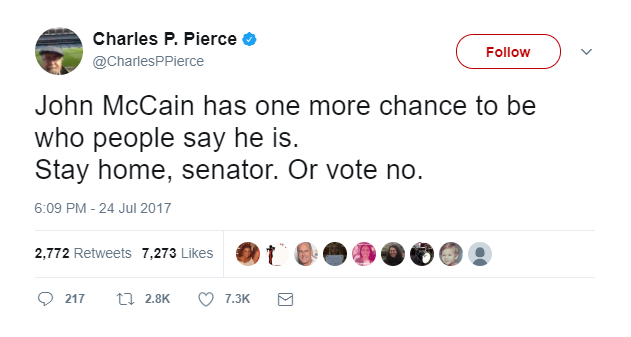 Lastly, the Washington D.C. correspondent for the Toronto Star, Daniel Dale, hyped that McCain could vote yes on a motion “to proceed with a mystery plan that’ll take insurance from people.”

Hmmm. So much for the respect and tributes that were offered to McCain last week upon receiving his grave diagnosis of a rare brain cancer. This harkens back to how McCain was given up until the presidential election talk started cranking up in 2007.

He was loved for frequently bucking his Republican colleagues, but once he became the nominee, he was savaged with fake news. Perhaps most infamously, The New York Times went on a tear suggesting that he had an affair. In February 2009, the paper was forced to settle a lawsuit brought against them by the female lobbyist who they alleged to have slept with McCain.