“CNN has decided to not move forward with production on the acquired series ‘Believer with Reza Aslan,'” the network said in a statement. “We wish Reza and his production team all the best.”

Aslan came under fire earlier this month after using profanity to describe President Donald Trump in the wake of remarks the President made about the terrorist attacks on London. In the tweet, Aslan called Trump “a piece of s–t” and expressed dismay at Trump’s use of the tragedy to promote his desire for a so-called “travel ban” on certain kinds of people hailing from specific countries in the Middle East. The author later apologized, saying, “I should have used better language to express my shock and frustration at the president’s lack of decorum and sympathy for the victims of London. I apologize for my choice of words.”

“Believer” would have entered a second season if it had been picked up.

The firing only continues what’s been an embarrassing few weeks for the anti-Trump network, ranging from being forced to fire New Year’s Eve co-host Kathy Griffin for her fake severed Trump head to Aslan to their false reporting about Jim Comey’s Senate testimony.

The decision also comes as a victory for the Media Research Center after several statements by president Brent Bozell denouncing Aslan (who’s long been known to be an anti-Christian, far-left pundit) and posts exposing past tweets that were equally if not more disturbing toward conservatives.

MRC Action coordinated phone calls to the network from outraged members of the public. NewsBusters will also provide more information as it develops.

Aslan tweeted about CNN getting rid of him. Offering unintentional comedy, he claimed, "“I recognize that CNN needs to protect its brand as an unbiased news outlet.” 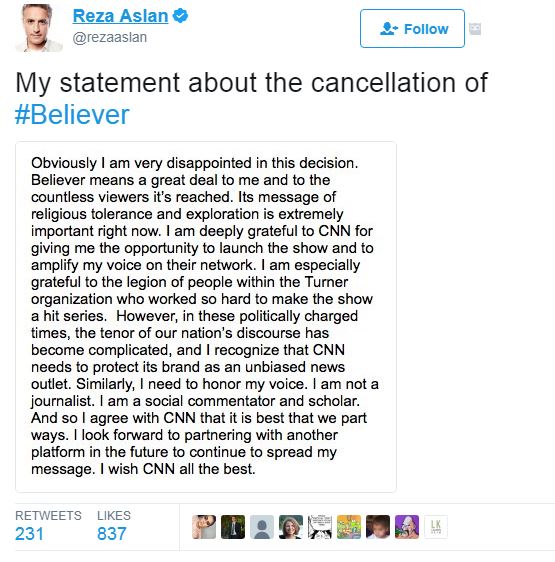