What Do You Know? ‘60 Minutes’ Is Shocked Educated, Young Lefties Fall for Fake News Too

This past Sunday’s edition of 60 Minutes featured a piece by CBS’s Scott Pelley examining the idea of fake news, but it was far from perfect with a glaring omission, a shocked host and guest that liberals fall for fake news, and downright hypocrisy from the network that promulgated Dan Rather’s fake news.

Going first to who falls for fake news, Pelley’s examples were heavily skewed to so-called right-of-center falsehoods like Pizzagate or Hillary Clinton having Parkinson’s Disease.

Pelley repeatedly told viewers that fake news was an issue on both sides, but never provided any proof until the nine-minute-mark of the 13-minute exposé with two ludicrous headlines about President Trump using drugs and having cancer.

It was soon after this that guest and “internet advertising firm” CEO Jeff Green dropped this admission that both he and Pelley seemed befuddled by:

JEFF GREEN: So the first thing that we found out is that it is definitely a phenomenon that affects both sides.

GREEN: Yes. There is no question they're both affected.

There was yet another surprise in store for these hardcore liberals. After citing a case of left-wing fake news about Congress “plotting to overthrow President Trump,” Green revealed that “fake news readers on the left were more likely to be affluent and college educated.” At the other end, “right-leaning fake news overwhelmingly attracted readers in their 40s and 50s.”

Green admitted that this “shocked me,” and Pelley had a similarly flabbergasted look. Green added that he “thought the same way that many Americans perhaps think is that fake news was a phenomenon that only tricked the uneducated,” but, alas, “not true — just not — the data shows it's just not true.”

The glaring omission appeared a few minutes earlier while Pelley spoke to Jestin Coler, who “made real money on fake news” but overseeing two of them that fooled people (National Report and the Denver Guardian).

Touting the fact that “he pushed people’s buttons on issues such as abortion and ObamaCare” and reading headlines from some other Coler stories, Pelley shamefully left out the fact that Coler was not a Republican but a registered Democrat.

Hilariously, the pathetic National Public Radio (NPR) found the time to include this tidbit when they profiled Coler on November 23's All Things Considered:

Coler, a registered Democrat, says he has no regrets about his fake news empire. He doesn't think fake news swayed the election.

“There are many factors as to why Trump won that don't involve fake news,” he says. “As much as I like Hillary, she was a poor candidate. She brought in a lot of baggage.”

Also worth noting was Pelley’s lengthy time spent promoting fake news promulgator and far-right commentator Mike Cernovich, who told Mediaite after it aired that he found it to be “fair” and “good journalism.”

When it comes to pushing fake news, 60 Minutes has little room to talk. They most notably peddled the fake 2004 Rather story about then-President George W. Bush, but they had some other hits as well.

In February 2008, Pelley engaged in conspiracy theories by giving a full story to allegations that the Bush administration ran “a covert campaign to ruin” former Democratic Alabama Governor Don Siegelman (who ended up behind bars in 2006 for bribery). Pelley proudly touted supposedly Republican interviewees but, as my colleague Kyle Drennen explained at the time, they were anything but GOPers.

Here’s some other doozies the leftist newsmagazine has fed viewers over the years:

Here’s the relevant portions of the transcript from CBS’s 60 Minutes on March 26: 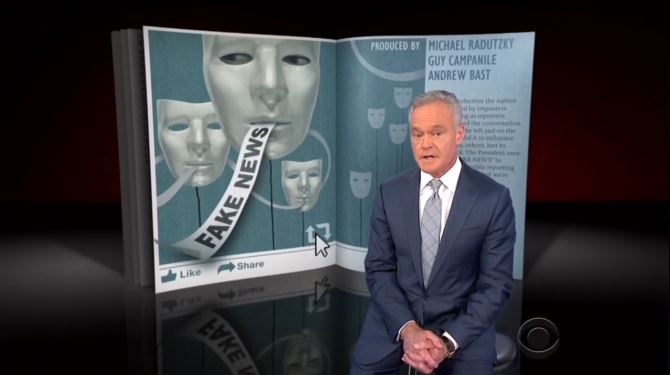 SCOTT PELLEY: In this last election, the nation was assaulted by imposters masquerading as reporters. They poisoned the conversation with lies on the left and on the right. Many did it to influence the outcome; others just to make a buck. The President uses the term “fake news” to discredit responsible reporting that he doesn't like, but we're going to show you how con artists insert truly fake news into the national conversation with fraudulent software that scams your social media account. The stories are fake, but the consequences are real. This past December, Edgar Welch opened fire in a Washington D.C. pizzeria. He told police he was there to rescue children forced into prostitution by Hillary Clinton. The story of Secretary Clinton's child sex trafficking operation in a pizzeria was invented before the election by fraudulent news sites and shared by millions.

PELLEY: You believe it's true today?

PELLEY: That story was sourced to an anesthesiologist who never met Clinton. It got so much traction, it had to be denied by Clinton's doctor and the national Parkinson foundation.

CERNOVICH: She had a seizure and froze up walking into her motorcade.

PELLEY: Well, she had pneumonia. I mean —

CERNOVICH: How do you know? Who told you that?

PELLEY: Well, the campaign told us that.

CERNOVICH: Why would you trust the campaign?

PELLEY: The point is you didn't talk to anybody who'd ever examined Hillary Clinton.

CERNOVICH: I don't take anything Hillary Clinton is going to say at all as true. I'm not going to take her on her word. The media says we're not going to take Donald Trump on his word and that's why we are in these different universes.

PELLEY: Cernovich's website is just one of hundreds publishing nonsense on the right and on the left. We were curious how a particular fake news article breaks out from one website and becomes a popular trending item on Facebook or Twitter, for example. And we discovered that one of the reasons is fraud. Some fake news publishers use computer software called “bots” to make their articles appear much more popular than they actually are. Bots are fake social media accounts that are programmed to automatically “like” or retweet a particular message. 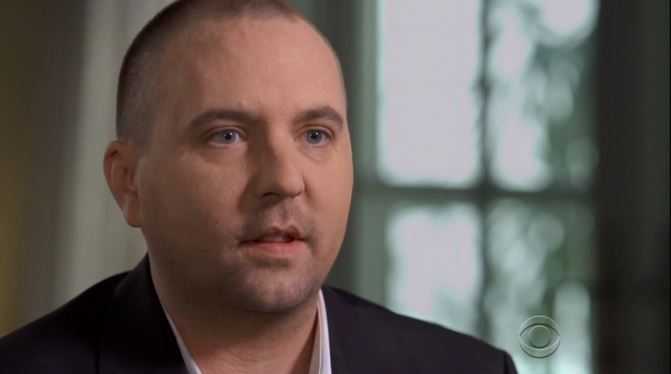 JESTIN COLER: Jestin Coler says a fake news headline has to make blood boil. He's not afraid to admit that he made real money on fake news. He's know for two fake news sites — one called National Report, the other Denver Guardian, where he pushed people's buttons on issues such as abortion and ObamaCare.

PELLEY: Coler wrote another fake story about an F.B.I. agent investigating Clinton emails who was killed in a murder-suicide and then there was the fake army quarantine of a Texas town infected with Ebola. That got eight million page views.

COLER: It's kind of almost an addiction, right? You kind of see something really take off, and then as it's coming down, you're kind of looking for that next high, I guess.

PELLEY: His highs were profitable. With each click, he made money on ads — over $10,000 a month he told us, writing fiction posing as fact.

PELLEY: Did the environment in this world change during the presidential election?

COLER: It did. Sure. A lot more players joined the game.

JEFF GREEN: So the first thing that we found out is that it is definitely a phenomenon that affects both sides.

GREEN: Yes. There is no question they're both affected.

PELLEY: One fake story green examined claimed that the Congress was plotting to overthrow President Trump. He was surprised to learn that right-leaning fake news overwhelmingly attracted readers in their 40s and 50s. And he found that fake news readers on the left were more likely to be affluent and college educated.

GREEN: That shocked me.

GREEN: I think I thought the same way that many Americans perhaps think is that fake news was a phenomenon that only tricked the uneducated. Not true. Just not — the data shows it's just not true. 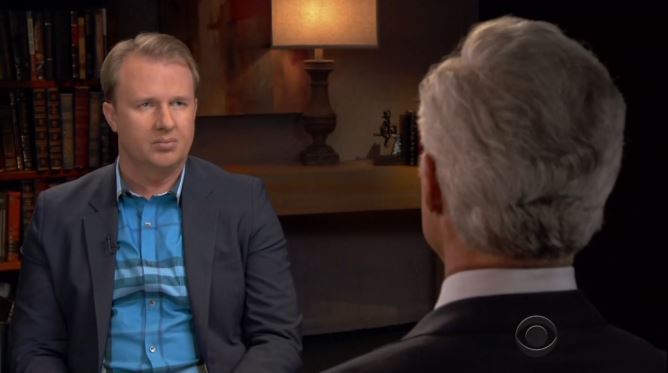 GREEN: What is most concerning is the amount of influence that they seem to have because the people that spend time in those echo chambers are the ones that vote.

PELLEY: After the election, Facebook and Twitter recognized the threat to their credibility and changed their programs to make it harder for fakes to proliferate. Both companies declined to be interviewed.