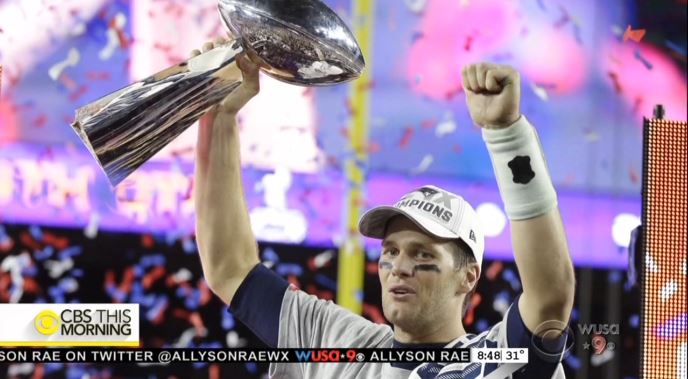 Talk about losing your mind, folks. In a Monday morning post, USA Today columnist Nancy Armour decreed that New England Patriots quarterback Tom Brady “has some explaining to do” about why he’s friends with President Trump and Brady “no longer gets a pass” for simply associating with him.

Lauding Colin Kaepernick as “eloquent” and fretting he faced criticism he faced for his National Anthem kneeldowns, Armour used Kaepernick to argue that Brady deserves to be berated in the public square for having a long-standing friendship with Trump.

Armour began with this diatribe, showcasing the left’s authoritarianism when it comes to demanding conformity of opinions:

Tom Brady no longer gets a pass on his friendship with Donald Trump.

Not after this weekend, when the country boiled over in rage and indignation at Trump’s decision to turn America’s back on refugees. Not after this season, when Colin Kaepernick was pilloried from coast to coast for trying to draw attention to the shortcomings of our country.

And not when he’s about to command the NFL’s biggest stage.

Recapping the left’s complaints about Trump’s campaign, Armour whined that Trump’s “doubled down on his hatred in his first week as president” and went DEFCON 1 worrying that, supposedly, the American people are “angry and frightened” that “the ideals that have made this country exceptional...are being abandoned.”

If only Armour would have been like this during any of the scandals or missteps during the Obama administration.

“Brady might not agree with Trump’s views or his policies, as he seemed to indicate last week...but in refusing to publicly disavow Trump's actions, Brady is giving tacit endorsement to both Trump and the chaos he has created,” she continued.

Armour’s intolerance reached a climax when after publishing a quote from Brady admitting that he doesn’t have to “agree with everything” friends think, she determined people aren’t allowed to be friends if someone’s name is Donald J. Trump: “No, it’s not.”

“It’s only now, when he’s facing questions and criticism, that he thinks the friendship should be off limits. But it doesn't work that way. If you stake out a position, you need to own it. Or if you’ve had a change of heart, explain why,” she hypocritically added.

For all of the negative talk, she flipped the script by holding up the failed San Francisco 49ers quarterback:

If Brady needs an example of how that’s done, he can look at Kaepernick.

From the day his national anthem protest became public in August, Kaepernick has been open, available and consistent with his opinion. It has not been a popular one; as the protests spread across the league, the San Francisco 49ers quarterback was portrayed as anti-American, anti-military and anti-police – all of which he denies.

He’s had insults, slurs and worse directed at him. He was blamed for the drop in TV ratings early in the season. One person last week even tried to say Trump’s election was partly the result of Kaepernick’s protests.

It would have been easy for Kaepernick to brush off questions or say he’d rather talk about football, as Brady has done. Instead, he’s been eloquent in detailing his concerns over police brutality in minority communities. He’s sparked conversations and reflection in NFL locker rooms and beyond.

Armour concluded by proving that while liberals shout about wanting the government out of their bedrooms, they are interested in who you speak to:

Regardless of whether he was duped into being a prop or is genuinely friends with Trump, Brady inserted himself into the national firestorm. He can’t be surprised that people want to know more. And now expect more.

In short, this should be none of Armour’s (or anyone else’s) business.