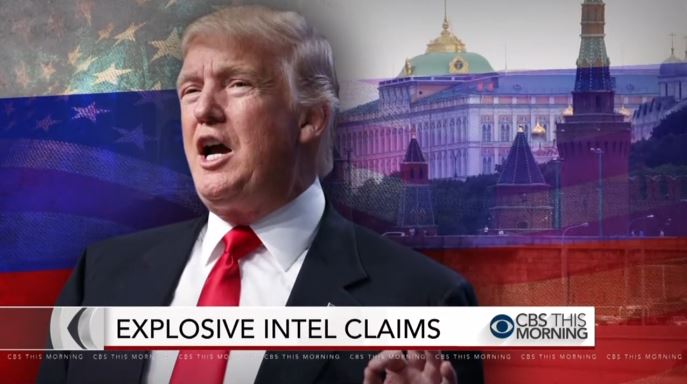 Conservative media critics (and even some considered to be neutral) lashed out on Wednesday at BuzzFeed’s recklessly unsubstantiated report about President-elect Donald Trump as they lashed out at BuzzFeed, calling their decision a “ridiculous” one that “violated journalistic ethics.”

Our friends at The Federalist issued this brief staff blog about Trump’s criticism of BuzzFeed as a “pile of garbage”:

During his first formal press conference in 2017 as president-elect, Donald Trump called BuzzFeed a “pile of garbage.” He’s right.

That’s all. Carry on.

Also at The Federalist, Bre Payton tore into longtime ABC correspondent Terry Moran for attacking Trump on Twitter: “Moran is covering BuzzFeed’s malfeasance by suggesting journalists aren’t obligated to publish only the truth that can be verified if the person who they’re covering has also spread untrue information.”

“In other words: Donald Trump spreads falsehoods, so we can do the same about him,” she added.

Payton also criticized The New York Times, which tweeted from its NYT Politics account that BuzzFeed simply was “stirring debate.” Meanwhile, she also noted how left-wing Pro-Publica president Richard Tolfel tweeted: “If you oppose the BuzzFeed decision to publish, you need to explain why citizens should not be allowed to see the dossier.”

In part, she rebutted: “Newsflash to reporters: it’s literally your job to not publish information that cannot be verified. It’s not about “hiding it from the public” but about what a news organization chooses to put its name behind by publishing.”

The insightful Joe Concha of The Hill was livid with BuzzFeed’s screw-up. Writing in his Wednesday column “BuzzFeed's publication of Trump report violated journalistic ethics,” Concha reminded readers of how BuzzFeed head Ben Smith encouraged “his staff to refer to him [Trump] as a “mendacious racist and “liar,” if they so choose.”

So if you're an editor who freely admits serious doubt around the Trump allegations and sees the words "unverified" and "errors" as it applies to the report, here are the simple questions:

Why publish it before verifying anything?

Why print anything that contains multiple errors, including one very big one that Michael Cohen, who serves as special counsel to Trump, has never even been to Prague, as was stated in the report.

Concha later noted that “[t]he simplistic answer here is that ethics got trumped by an obsession with clicks — and the ad revenue that goes along with them — once again” but there’s a deeper reality to be gleaned.

“[T]here's been ample criticism from the left toward the media that damaging reports on Trump are being suppressed, so perhaps that's part of BuzzFeed's impetus here. Perhaps Smith believes there was value in getting this story out in full — warts and non-verification and all — so the public can see it...But putting forth that choice based on a report devoid of sourcing, details, verification or corroboration while littered with errors isn't a fair choice,” argued Concha.

National Review’s David French was a fervent member of the Never Trump movement during the election and remains troubled by Trump, but French utterly rejected what BuzzFeed pulled on Tuesday night.

Writing for NR’s The Corner, French reacted to a letter Smith sent to staff explaining the publishment decisions this way:

This is ridiculous. How can “Americans make up their own minds” when they have no ability to fact-check the allegations? The public knows nothing about the sources, nothing about the underlying claims, and has no means of discovering the truth. Buzzfeed admits that “there is serious reason to doubt the allegations.” It’s been using its journalistic resources trying to verify the claims for “weeks” and hasn’t been able to. But “Americans” can somehow do what Buzzfeed can’t? This isn’t transparency; it’s malice.

Since Tuesday, French has gone on to write much more about what he deemed perhaps “[t]he worst case of journalistic malpractice ever,” which I recommend reading here.

Fox News Channel’s MediaBuzz host Howard Kurtz hasn’t spoken on-air about BuzzFeed, but he tweeted following the Trump press conference that: “I do think CNN exercised more caution in its handling fo the story & shouldn’t be lumped w/Buzzfeed. Still not sure I’d have run it at all.”

Meanwhile, there are a few that have yet to comment (as of this writing) or were supportive of BuzzFeed. For example, Deadspin reporter Albert Burneko left basic journalistic ethics at the door with his post entitled “Craven Reports Scold BuzzFeed For Reporting News.”

Unaware that his definition of news could be extended to really anything that’s unsubstantiated, Burneko unleashed this doozy: 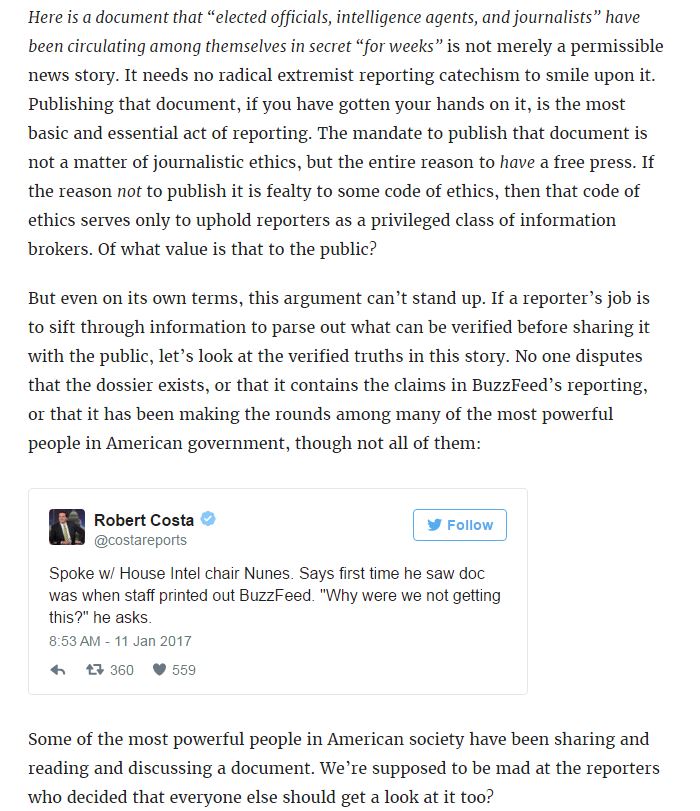 Deadspin is now owned by Univision, but this angle is rather amusing seeing as it how Deadspin was originally part of Gawker and we all know how that turned out.