Over the course of a roughly ten-minute debate, Smith was annihilated by host Chuck Todd, who chastised him for pushing “an untruth” and “fake news,” which was equivalent of “a false birth certificate” under the pathetic guise of “transparency.”

Todd thankfully prefaced the debate with the disclosure that NBC Universal “is an investor in BuzzFeed” (to the tune of 25 percent) and read from a staff note Smith e-mailed on Tuesday night.

From the first sentence out of Smith’s mouth, one knew there would be problems. Smith’s argument largely fell along the lines that ABC’s Terry Moran employed, which was the media covered the false allegations about President Obama’s birth certificate, so why not tout these about Trump?

“And if you remember, we were both there during Obama’s first campaign. That was the first approach and then you see these things spread and you have to engage them...[T]his was a document that was not just circulating at the highest levels of the intelligence community, the most powerful intelligence officials in the country referring to it in briefings...And I think and we didn’t just have it. We're starting to act on it,” Smith argued.

After allowing Smith to ramble, Todd pushed back against Smith’s emphasis that readers should use their own judgment about the validity of the document they published: 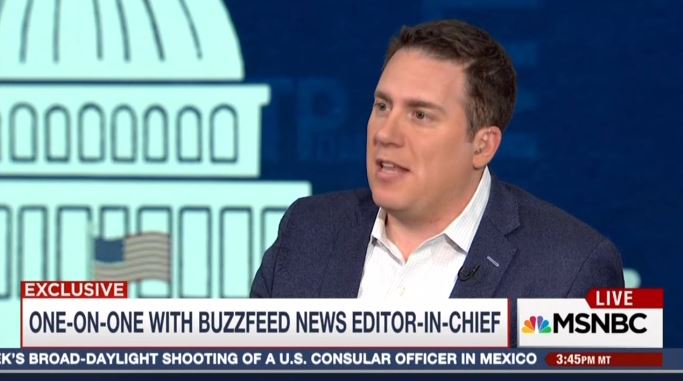 Smith countered that “as with the Obama birth certificate thing during the Obama campaign, this is an incredibly difficult balance that everybody in our business navigates every day,” but Todd wasn’t having it [emphasis mine]:

TODD: — I understand, but did you publish a false birth certificate?

SMITH: You are — we certainly quoted the president-elect of the United States making false claims about it and years ago, we debated whether we should quote regular citizens in Iowa saying, you know, I don't believe his birth certificate and I remember us thinking at first, we probably shouldn’t, that we shouldn't pass that on and then saying, you know what? This has become a force that is impacting the conversation, the information environment, fake news are now these — they are factors in the conversation.

TODD: But haven't you just participated? I mean, the fake news thing — it’s turned into this worst case —

Todd dropped the hammer with this accusation that while “I know this was not your intent, I've known you a long time, but you just published fake news.” Smith appeared stunned and when Todd wondered why it’s “unfair” for him to say such a thing, Smith smugly stated that “I think people love to throw the term fake news around.”

Next, the Meet the Press moderator presented a middle ground in which BuzzFeed News could conceivably published it, but neglected to do:

TODD: It seems to me there’s — it's almost as if you're saying there was — there was only two choices you had here. Not publish or publish. There is a gray area. I understand this idea in this day in age that there are many readers that feel as if proof — show me you have the goods. There is such thing as redactions and you could have redacted. You could have said, here it is, and you know what —

TODD: — you didn't do many. You did very, very few and in some cases, not enough as far as even I believe one of the people who contributed to it. So, why not do that? Why not go that middle ground? I understand, you're making a case here, hey, all these leaders have this. We know this is available. CNN made the decision to say, to do what you just do, hey, this is out there, we know that this report exists, it's a dossier, it's unverified information. Stop.

Wow. Todd still had plenty of ammo as he accused Smith of using transparency to mask the laziness of BuzzFeed [emphasis mine]:

TODD: But at one point, I understand this and all this transparency, but transparency can turn into a crutch to turn into laziness. I mean, the job of the reporters is we're doing our best to find truth, okay? At the end of the day, it's the best truth we can have. And you are — you are —

SMITH: If we had an unlimited amount of —

TODD: — or at least something you hadn't proven true yet.

I couldn’t have put any better, Chuck. Somehow, Smith again claimed that this was an open secret in Washington and thus a disservice to the American people (despite its numerous concerns):

If we gotten that dossier, if there had not been public — if there had not been a conversation about secret documents that no one was allowed to see, we would have continued as I think we did and many of our other competitors and Prague and other places to report this out. I mean, I agree with you. When you get a tip, when you get an anonymous document, as we do every day BuzzFeed News, as we — when we, you know, recently.

Todd responded by wondering why doesn’t BuzzFeed simply announce “all of our unsubstantiated sources.” Smith’s crash-and-burn session dragged on as he held out hope that Trump was briefed on the dossier (contrary to NBC News reports):

TODD: By the way, it's not confirmed that he was definitely briefed on this document.

SMITH: I know. I saw your report on that. It had been reported.

TODD: Okay. We have not done that.

SMITH: It was reported last night. I realize that.

TODD: Did you make an effort to confirm whether or not he actually was briefed on this? And would that have made a difference in your decision?

SMITH: We did a lot — we had done a lot of reporting about extent to which this was — this was widely distributed at the highest levels. I think do think there was also a report last night that was part of that. We did not have all of that ourselves.

When asked to comment on The Washington Post’s Margaret Sullivan telling readers that “[i]t’s never been acceptable to publish rumor and innuendo,” Smith admitted that “we are now in a media environment where you have to engage in false statements.”

“I think in the long term, we all have to reckon with the reality that we've got to engage information that is out there, true and false, do our best to verify it and be as transparent as we can with our readers about what we know, what we don't know, what we doubt. It's an incredibly uncomfortable thing,” Smith explained.