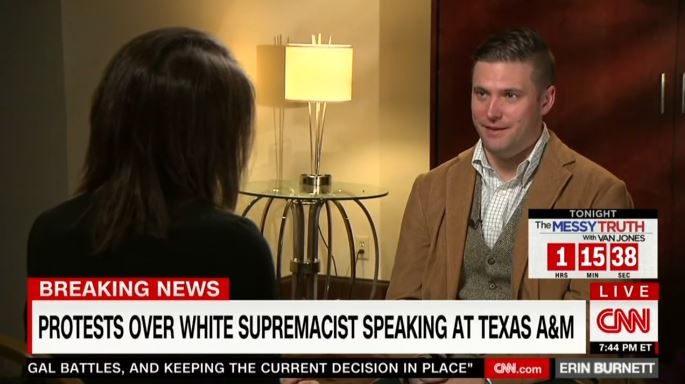 In this week’s edition of the liberal media normalizing the abhorrent “alt-right” and neo-Nazi movement led by Richard Spencer, CNN dedicated 36 minutes and 46 seconds over the course of 24 hours on Monday and Tuesday to previewing a Spencer speech at Texas A&M University despite appropriately stating that he has a “hate-filled mission.”

CNN’s obsession with Spencer's speech began on Monday night's AC360 with Tuchman's report before replays followed on New Day and three installments of CNN Newsroom prior to wrapping up on Burnett’s eponymous show.

“Tonight at Texas A&M University a white supremacist will speak on campus much to the dismay of most students, teachers and university officials. Richard Spencer is president and director of the National Policy Institute. It's a harmless sounding organization but it has a hate-filled mission. Texas A&M did not invite him to speak,” CNN Newsroom host Brianna Keilar explained in a lead-in to Tuchman during the 12:00 p.m. Eastern hour.

There were six segments on Spencer, some speaking to A&M administrators and students who planned to protest him. Correspondent Gary Tuchman contributed most of the airtime with full reports from the campus in College Station, Texas, including an interview with event organizer Preston Wiginton, who thinks Spencer “has some valid points.”

Tuchman wondered what Wiginton thought about the importance of a white nation and Wiginton replied: “I think it was at one time and I think that the reaction of Trump being elected and the reaction that's going on with the alt- right being popular is a reaction to it declining on being a white nation.”

Wiginton declined to view himself as a neo-Nazi or white supremacist but rather someone who’s being “marginalized” despite holding the false and monstrous view that being white comes with a higher IQ. To further illustrate his radicalism, he told Tuchman that “sometimes maybe being a bigot is wise.”

The sixth and final segment giving Spencer’s event free publicity aired on Erin Burnett OutFront that went one step further as correspondent Sara Ganim interviewed Spencer himself. At the conclusion of Ganim's interview with Spencer and speaking briefly with protesters opposing Spencer, Burnett followed with a lengthy and testy debate on race between her panelists (including NewsBusters contributing writer Jeffrey Lord).

While CNN exhibited disgust for white supremacy and emphasized that the Aggies didn’t invite Spencer, they still fell into the same pattern that I covered back on November 22.

As I explained that afternoon, CBS and NBC spent more than three times the coverage in one morning news cycle on Spencer than they have in the past four Marches for Life (across both morning and evening newscasts).

For those who did not support Donald Trump, it was too easy to envision Spencer and his supporters as a logical and significant extension of Trump. To answer why this has happened, the answer is simple as the media has played a large role in magnifying neo-Nazism despite Spencer’s conference attracting just over 200 people.

To those Americans who voted for the President-elect, the media’s decision to normalize an ugly part of our society and link them to Trump only erodes the little trust that Trump voters have in the mainstream media to tell the truth and insure they won’t be linked to this minuscule group of neo-Nazis.

Perhaps Tuchman and company would have been best served by listening to Van Jones in the days leading up to his Tuesday night CNN special The Messy Truth.

At the center of the new CNN program, Jones featured a heartbreaking interview with a blue-collar, white Ohio family who backed Trump after voting twice for Barack Obama and firmly denounced the stereotypes (by the media) that Trump voters are racists.