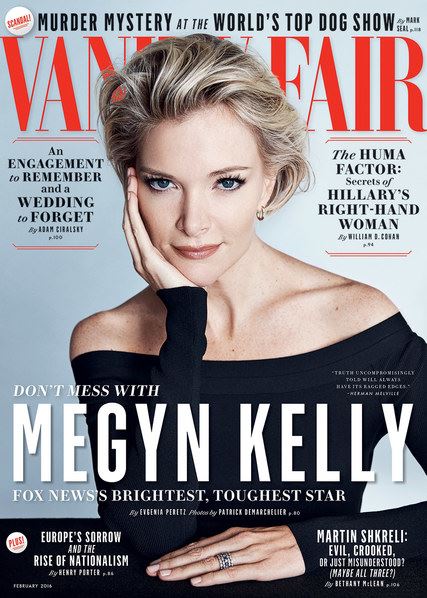 For the cover story of its February issue, Vanity Fair profiled FNC’s Kelly File host Megyn Kelly and while they charted her admirable rise to primetime, work ethic, devotion to her family, and fair interviewing skills, the liberal magazine heavily touted examples of her holding the feet of conservatives to the fire and praise from liberal journalists like Chris Matthews and Katie Couric.

All told, it made no attempt to mention her confrontations with liberals, whether it’s Anthony Weiner (on numerous occasions), a CAIR spokesman, James Carville, liberal guests (like Richard Fowler), or specific instances of her exposing liberal media bias (for a sampling of cases, see here, here, and here) besides a vague complaint that she often covered “the left-wing slant of the mainstream media.”

The piece by contributing editor Evgenia Peretz begins with GOP candidate Jeb Bush storming out of the FNC studios after an interview with Kelly but quickly gives way to the proclamation that “[u]nnerving would-be leaders, blowhards, and didacts from both parties has become Kelly’s specialty, as the world learned in August.”

Not surprisingly, Peretz spent large chunks of the piece giving readers by a blow-by-blow recap of Donald Trump’s disdain for Kelly dating back to her calling him out in the first GOP debate for his attacks on women.

Perez explained that the recent episodes with Trump “was one in a string of satisfying male-ego deflations that have helped her surpass cable’s biggest news star, Bill O’Reilly, in the key demographic of 25–54” by providing “occasional, yet highly entertaining, bucking of the conservative party line” that’s “earned praise from liberals such as Chris Matthews, Joy Behar, and Gayle King.”

Despite exploring near the end of the piece that she largely detests the feminist movement for the double standard in the treatment of conservative women, Peretz repeatedly described Kelly as “feminist.”

Peretz went on to hype that the FNC host’s demeanor when taking “right-wing red-meat stories are presented with a varying degree of balance and often treated with humanity and wit” while when it comes to liberal stories, “she can demonstrate reason and sympathy when encountering vicious, right-wing small-mindedness.”

Without a hint of irony, Peretz cited Yahoo News anchor and longtime liberal journalist Katie Couric as having nothing but voluminous praise for Kelly:

Veteran newswoman Katie Couric praises her dogged interviewing skills, crucial when interrogating dodging politicians. “She takes no prisoners and takes no BS,” says Couric. “And I’ve noticed that she’s a really good listener. Sometimes the tendency is to go down a laundry list of questions and to not say, ‘Wait a minute.’ It requires you to think on your feet and to take the conversation in a totally different direction.”

When running through Kelly’s biggest moments as an FNC host, Peretz touted a slam from an unnamed co-worker, “right-wing radio host Mike Gallagher” for going after her having children, criticizing Karl Rove on election night 2012, and colleagues Lou Dobbs and Erick Erickson over the role of women as breadwinners.

As mentioned above, Peretz neglected to profile any of Kelly’s numerous episodes clashing with liberals (ex. Bill Ayers), calling out liberal lies, denouncing the left on illegal immigration or how President Obama and Hillary Clinton have so far declined to being interviewed by her.

However, Peretz lamented that Kelly has thus far declined to be a full-blown feminist in cheerleading liberal causes like abortion and equal pay:

What with all the male bullies she’s put in their place, Kelly would be perfectly positioned to become a leader in women’s issues such as equal pay and reproductive rights. But Kelly, whose position on abortion, she says, is known only to her husband and herself, claims these issues actually divide women.