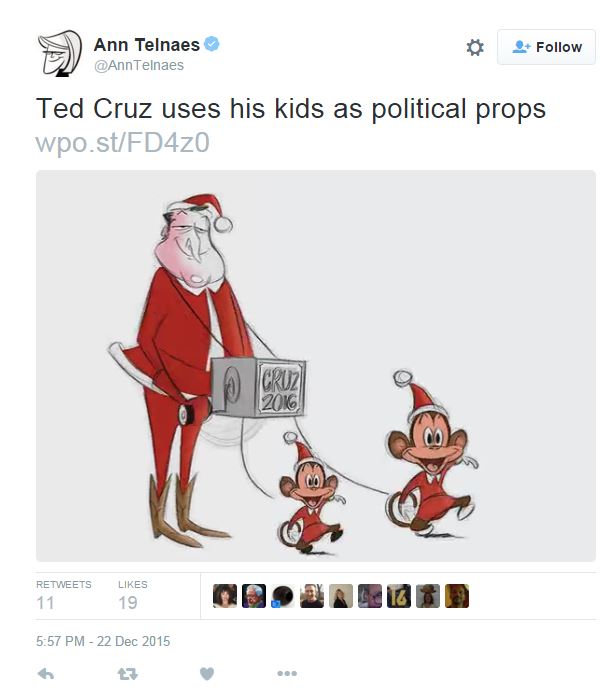 Update, 9:10 p.m. Eastern: Following near instant outrage from across the political spectrum, The Washington Post removed both the cartoon and the two-paragraph explanation of Ann Telnaes’s cartoon depicted Ted Cruz’s daughters as toy monkeys.

Informing readers of the decision, editorial page editor Fred Hiatt ruled that he could “understand why” Telnaes penned the cartoon, but admitted that he “do[es] not agree” with what she published:

It’s generally been the policy of our editorial section to leave children out of it. I failed to look at this cartoon before it was published. I understand why Ann thought an exception to the policy was warranted in this case, but I do not agree.

In attempting to explain her arguably racist GIF, Telnaes argued that because daughters Caroline and Catherine appeared in a humorous Christmas-themed ad, they have decided “to indulge in grown-up activities” and allowed their father to play them “as political props.”

Under other, unspecified circumstances, Telnaes lectured that “[t]here’s an an unspoken rule in editorial cartooning that a politician’s children are off-limits” since “[p]eople don’t get to choose their family members so obviously it’s unfair to ridicule kids for their parent’s behavior while in office or on the campaign trail- besides, they’re children.”

Classy. @washingtonpost makes fun of my girls. Stick w/ attacking me--Caroline & Catherine are out of your league. https://t.co/N61ys6z8w1

Even though the Christmas season is upon us, the liberal media haven’t stopped in their vicious attacks on conservatives. Back on December 14, the elder Cruz and Texas Senator was smeared by Nightly Show host Larry Wilmore as “creepy” with mental problems while guest Aida Rodriguez ruled that Cruz would “do everything the KKK does” if he becomes president.