Inflammatory, self-pitying Washington Post online media reporter Taylor Lorenz, who claims to fight (conservative) misinformation online, pushed her own line of intimidation and misinformation against one of her conservative targets, posted Friday: “Twitter account Libs of TikTok blamed for harassment of children’s hospitals -- Employees are warning colleagues to take action against the anti-LGBTQ account, saying it’s ‘only a matter of time’ before its posts lead to violence.”

So what awful deeds does the Libs of TikTok account actually commit? It reposts unedited videos previously posted by lefties (often of the gender-radical variety) on social media channels, sometimes with brief commentary. Liberals who don’t like their own idiocies exposed to the wider public react hysterically. 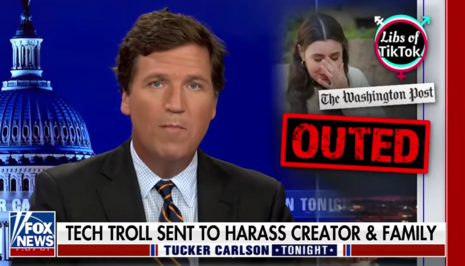 Lorenz had previously doxxed the woman behind the account, revealing her name and address in the Post.

Undaunted, Libs of TikTok is now publicizing video clips produced by hospitals, including Boston Children’s Hospital, promoting “gender-affirming” hysterectomies -- surgeries for the removal of sexual organs -- for young people, though whether the hospital offered the surgeries to actual minors has not been confirmed.

That triggered Lorenz to try and do (along with co-authors Elizabeth Dwoskin and Peter Jamison) what she loves most: Try and drive Libs of TikTok off the internet.

Children’s hospitals across the U.S. are facing growing threats of violence, driven by an online anti-LGBTQ campaign attacking the facilities for providing care to transgender kids and teens.

Twitter has left up the account inspiring the attacks, despite its employees voicing concerns in internal Slack channels that it’s “only a matter of time” before the posts lead to someone getting killed.

The campaign is led by Libs of TikTok, a Twitter account with more than 1.3 million followers run by a former Brooklyn real estate agent named Chaya Raichik, whose posts are frequently cited by Fox News’s Tucker Carlson and other right-wing media figures.

After gaining a large Twitter following in the spring as she baselessly accused LGBTQ teachers of being pedophiles and “groomers,” Raichik began criticizing children’s health facilities earlier this summer, targeting a hospital in Omaha in June and another in Pittsburgh in August. The attacks resulted in a flood of online harassment and phoned-in threats at both hospitals.

Reached by Twitter direct messaging on Thursday, Raichik didn’t respond to a question about whether she felt responsible for the threats to the hospitals. “We 100 % condemn any acts/threats of violence,” she wrote.

The account was even blamed for a false bomb threat, though as yet there is no hint of who actually send the threat or what their motives were.

After Raichik falsely claimed on Aug. 11 that Boston Children’s Hospital performs hysterectomies on children, the hospital received a barrage of “hostile internet activity, phone calls, and harassing emails including threats of violence toward our clinicians and staff,” the hospital said in a statement. The hospital does provide hysterectomies to certain patients over 18.

On Tuesday, police responded to an anonymous bomb threat at the hospital….

Even when Raichik is right, she’s wrong.

Raichik made a similar accusation against Children’s National Hospital in Washington, posting a recording on Aug. 25 in which she can be heard questioning two unidentified hospital employees about whether gender-affirming hysterectomies are offered to patients aged 16. Both employees erroneously said the procedure was available to a 16-year-old and one said even younger patients are eligible, though the hospital says that information was incorrect and that neither employee is involved in patient care….

Lorenz used “specialists in online disinformation” as her muscle to get the account thrown off social media, for things the account had no part in doing.

Asked if she intends to resume attacking hospitals after her current timeout ends, Raichik declined to answer.