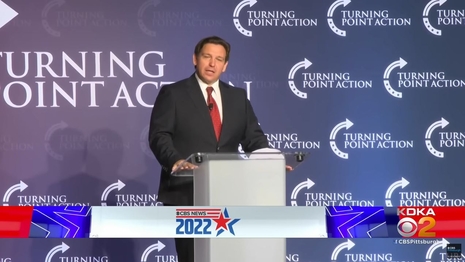 In Saturday’s “DeSantis, Thinking of 2024 Election, Reaches Out to the Far Right,” Trip Gabriel and Patricia Mazzei laid out red flags as DeSantis sold himself in Pennsylvania while ostensibly campaigning for Mastriano.

The Times tried mightily to lump the mainstream DeSantis in with Trumpian candidates by speaking in menacing terms:

Gov. Ron DeSantis of Florida, widely seen as the Republican who poses the biggest threat to Donald J. Trump if they both run for president in 2024, blitzed through Pennsylvania and Ohio on Friday during a national tour with hard-right candidates that was clearly intended to elevate his standing and earn political capital with potential future leaders in battleground states.

As he aims to wrest control of the conservative movement, Mr. DeSantis is appearing with some of its highest-profile and most incendiary figures -- midterm candidates who, unlike him, have relentlessly pushed the fiction that the 2020 election was stolen. His rallies on Friday for Mr. Mastriano and J.D. Vance, the Republican nominee for Senate in Ohio, came five days after an event for Kari Lake, the G.O.P. pick for governor of Arizona, and Blake Masters, the nominee for Senate there.

He attacked Democrats’ newly passed climate, health and tax law by zeroing in on its hiring of more than 80,000 Internal Revenue Service employees over a decade, meant in part to restore the agency’s depleted enforcement staff.

They then smeared DeSantis for having “[e]cho[ed] conspiracy theories on the right about the hires, which the Biden administration says will not result in new audits of households earning under $400,000, Mr. DeSantis claimed that the increased staffing was ‘absolutely going to hit people who are small business folks, contractors, handymen, you name it.’”

Mastriano himself has raised The Times's alarm by rallying Republicans to his cause of late, as documented by Gabriel, who claimed “Democrats remain anxious they could lose to Mr. Mastriano because of the free-floating anger of the electorate this year[.]” A good thing Democrats never vote angry!

The reception was far sunnier for perennial liberal also-ran O’Rourke against Republican incumbent Greg Abbott. Providing a reminder that The Times serves only the liberal elites in New York and Washington (and not Texas), they portrayed both O’Rourke and his supporters as sunny optimists against hateful anti-abortion hecklers.

As supporters of Beto O’Rourke, the Democratic candidate for Texas governor, emerged from a crowded campaign event in a quaint, conservative bastion north of Dallas, Treva Sanges was there to protest them.

“Murderers!” she called out.

Most walked by her, but Abbi Gregory and a friend, who support abortion rights, stopped and engaged Ms. Sanges in a lengthy debate in the late evening sun. The women quickly realized that while they were political opponents, they were also once neighbors.

“I actually have a few of her art pieces hanging in my house,” Ms. Gregory, 22, said. “And I love her to pieces,” added Ms. Sanges, 58. The women eventually found a thin reed of agreement: abortion bans should allow exceptions for child rape, which Texas law does not provide.