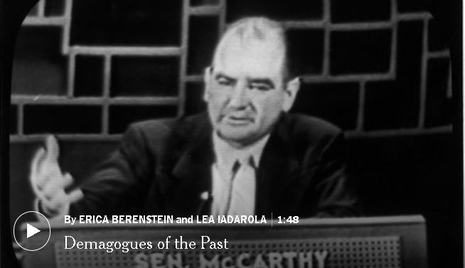 What do Wisconsin, Arizona, and Georgia have in common? Dangerous conservative trends, according to the New York Times. The paper saw the dark cloud of McCarthyism still hanging over Wisconsin in “Why Wisconsin Is the Most Fascinating State in American Politics.”

It’s where two once-powerful senators, Joseph McCarthy and Robert La Follette, defined two of the major themes we still see playing out today -- what the historian Richard Hofstadter called the “paranoid style,” in McCarthy’s case, and progressivism in La Follette’s.

The Times poses as the Guardians of Truth, but they are still, despite all evidence, well, Soviet Infiltration Deniers: They're still parading around with McCarthy being asked about his decency and "McCarthy used his new platform to begin his infamous anti-communist crusade — persecuting supposed communists inside the federal government." Supposed! Then they conclude:

Much of the state remains rural and conservative -- McCarthy and Trump country.

Asked “How did the state get so starkly divided?” Epstein ridiculously responded that right-wing radio hosts control the debate:

The Wisconsin political and media ecosystem has long been dominated by conservative talk radio hosts. More than any other state in the country, Wisconsin’s right-wing talkers control the political agenda, and like Fox News nationally, they generate ratings by stoking outrage -- usually against Democrats, but sometimes against fellow Republicans.

The newspapers in Madison and Milwaukee are as liberal as the Times. Later Epstein whined about mean Republicans.

Republicans have such control of the levers of power in Wisconsin that voters are almost immaterial. It is the most gerrymandered state legislature in the country….

Wisconsin doesn’t afford its citizens the opportunity to petition things into law or the state constitution like Michigan and dozens of other states do. So the only hope is through the Legislature, where Republicans have shown no compunction about maintaining their hold on power through whatever means necessary.

Alexander Burns reported from Georgia on Sunday’s front page and portrayed the Republican Party’s supposedly “hard-edged” and “hard-line” ideas in the least flattering fashion he could. "Yet in the 2021 off-year elections, Republicans recovered some ground with Asian American voters in New York City and Virginia, offering a hard-edged message about crime and opposition to liberal education policies that would have reformed or abolished certain kinds of selective public-school programs that are popular with Asian families but that many Democrats regard as exclusionary of Black and Hispanic students." But Burns claimed "conservative-leaning older voters have turned away from the Republican Party’s increasingly hard-line views on race and national identity."

Contributing writer Robert Draper in the Sunday Magazine wrote thousands of words on the awfulness of Arizona’s GOP, even throwing in a nasty, unfounded Nazi comparison: “The Arizona Republican Party’s Anti-Democracy Experiment -- First, it turned against the establishment. Now it has set its sights on democracy -- the principles, the process and even the word itself.”

Trump also endorsed Blake Masters, now the Arizona Republican candidate for the U.S. Senate against the incumbent Democrat, Mark Kelly. Masters, the 36-year-old former C.O.O. of Peter Thiel’s venture capital firm, embraces the “great replacement” conspiracy theory. “If you say as a candidate, ‘Obviously, the Democrats, they hope to just change the demographics of our country, they hope to import an entirely new electorate,’ they call you a bigot,” he told Rob Hephner, who goes by Birdman, on the “Patriot Edition” podcast in April. Such views are in alignment with those of Andrew Anglin, the publisher of the neo-Nazi website The Daily Stormer, who gave Masters his “forceful endorsement.” (Masters rejected the endorsement.)

Hillary Clinton was endorsed in 2016 by the Communist Party. Was that relevant?