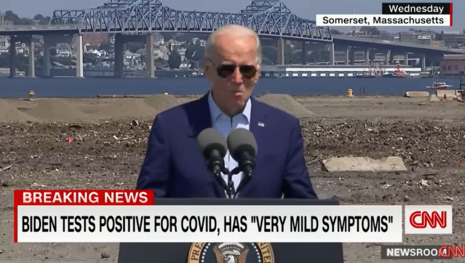 The last two presidents have each caught the coronavirus while in office, Donald Trump in early October 2020, before vaccinations were available, and Joe Biden last week. But the contrast in the tone of the New York Times coverage of those two events couldn’t be more different.

In Saturday’s “Biden Learns to Live With the Risks of the Coronavirus” by Michael Shear and Zolan Kanno-Youngs, there was no hint of blaming Biden for the hundreds of thousands of American deaths due to COVID that have occurred on his watch, or of his catching COVID himself due to his own lack of care. Instead, the paper suggested he was a victim, describing how “the White House has dropped most of the extraordinary measures it once employed to protect the commander in chief.”

It opened with an anecdote of touchy-feely Biden that would have made the Covid-hysteric media break into a sweat if performed by an unmasked Republican politician.

One after another, President Biden hugged and kissed them.

At a packed ceremony in the East Room of the White House on July 7, Mr. Biden bestowed the Presidential Medal of Freedom, the nation’s highest civilian honor, on 16 Americans, some in their 80s or 90s. After reaching around to hang the medal on their necks, the president embraced most of them, shook hands with a few and gave three a smooch on the cheek.

The new-found fatalism about the president seemingly destined to catch COVID marks a striking change from the scare tactics around COVID coverage so prevalent during the Trump era.

Inside the West Wing, there was never much doubt that Mr. Biden would eventually contract the disease. By this week, many of the people around him already had….

Mr. Biden’s coronavirus infection is a stark illustration that the Covid vaccines, powerful as they are, are far from the bulletproof shield that scientists once hoped for.

Biden also thought the vaccines would be “bulletproof.” The Times certainly made no mocking mention of President Biden’s declaration at a CNN Town Hall in 2021: “You’re not going to get COVID if you have these vaccinations.”

By contrast, the vituperative mockery came immediately upon President Trump’s diagnosis on October 2, 2020. Alexander Burns’ political memo “Trump’s Illness Makes It Clear: This Election Was Always About the Virus” seethed with anger and blame.

But long before Mr. Trump contracted the coronavirus, he had already earned a ruinous verdict from many Americans on his role in addressing the disease. On every subsidiary debate arising from the pandemic -- on questions of reopening businesses and schools, implementing mask mandates and social distancing, even on hastening the delivery of a vaccine -- polls have found Mr. Trump on the wrong end of public opinion, sometimes by gaping margins.

Trump’s “Operation Warp Speed” did in fact “hasten the delivery of a vaccine,” saving hundreds of thousands of lives, and the efficacy of mask mandates have been cast in doubt even among liberal media outlets, and everyone but the teachers’ union heads admit that closing schools was a moral and educational disaster. But don’t wait for the paper to admit Trump was right about some things COVID-related.

The headline and subhead to Peter Baker and Maggie Haberman’s story was no less spiteful toward a sick president:

Trump Tests Positive for the Coronavirus -- The president’s result came after he spent months playing down the severity of the outbreak that has killed more than 207,000 in the United States and hours after insisting that ‘the end of the pandemic is in sight.’