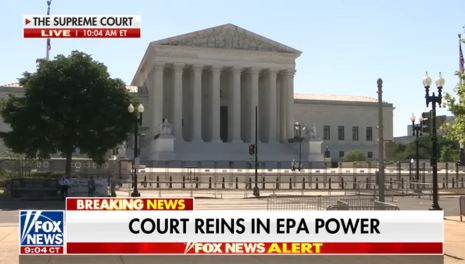 The front of Friday’s New York Times featured dismayed coverage of another conservative-pleasing ruling from the Supreme Court, this one reining in the Environmental Protection Agency. First up, legal reporter Charlie Savage’s “E.P.A. Ruling Is Milestone in Long Pushback to Regulation of Business.”

The Supreme Court ruling in the Environmental Protection Agency case on Thursday was a substantial victory for libertarian-minded conservatives who have worked for decades to curtail or dismantle modern-style government regulation of the economy.

In striking down an E.P.A. plan to reduce carbon emissions from power plants, the court issued a decision whose implications go beyond hobbling the government’s ability to fight climate change. Many other types of regulations might now be harder to defend.

Savage laid out the traditional liberal take on governmental regulatory agencies – they are vital to protect the public, and could never harm or act as a shield to preserve big businesses against competition by pushing regulations that smaller companies can’t afford to comply with.

The ruling widens an opening to attack a government structure that, in the 20th century, became the way American society imposes rules on businesses: Agencies set up by Congress come up with the specific methods of ensuring that the air and water are clean, that food, drugs, vehicles and consumer products are safe, and that financial firms follow the rules.

Such regulations may benefit the public as a whole, but can also cut into the profits of corporations and affect other narrow interests. For decades, wealthy conservatives have been funding a long-game effort to hobble that system, often referred to as the administrative state.

Savage concluded that thanks to “the ideology of the contemporary Republican Party….it is unlikely that Congress will enact new laws expanding regulations.” His reasoning was sentimental.

The prospect that the Republican-appointed supermajority on the court may be just getting started in assaulting the administrative state over the coming years is alarming those who say the United States needs regulations to have a civilized society.

Then he quoted former Obama appointee Marietta Robinson: “If you don’t have regulations, then the only people who will benefit will be those who, with no rules, will make more money.” 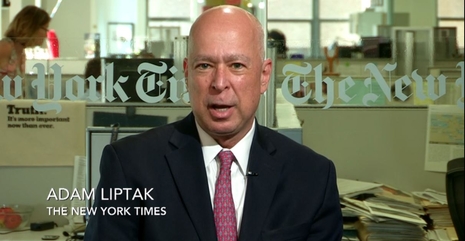 Supreme Court beat reporter Adam Liptak also made his opinion clear in Friday’s front-page story, as “Supreme Court Limits E.P.A.’s Ability to Restrict Power Plant Emissions” was dominated by the losing argument from Justice Elena Kagan. Even though the Court voted 6-3 to limit the EPA’s to regulate carbon emissions from power plants, her rhetoric dominated the story at the expense of the actual majority decision.

In ruling against the E.P.A., the Supreme Court again waded into a politically divisive issue on the final day of a blockbuster term, adding to the conservative supermajority’s decisions to eliminate the constitutional right to abortion, vastly expand gun rights and further erode the wall separating church and state....

In dissent, Justice Kagan wrote that the court had substituted its own policy judgment for that of Congress.

….In dissent, Justice Kagan wrote that the statute at issue in the case had given the agency ample authority….She added that the agency was best suited to take on climate change.

On and on Kagan went. In all, there were 21 sentences in the piece either quoting Kagan or summarizing her thought, compared to just nine from Roberts, who authored the winning majority opinion, and three from a concurring opinion.