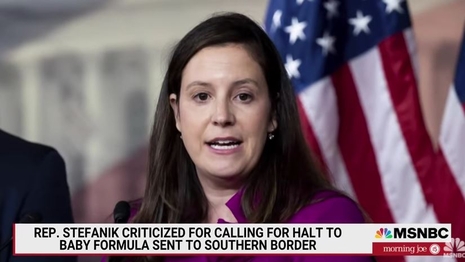 The Times is too cowardly to directly accuse Republicans of espousing “great replacement” theory, so Karni engaged in cloudy wordplay to conflate Republican stands against illegal immigration as genocidal.

And after the deadly mass shooting in Buffalo, where a heavily armed white man is accused of killing 10 Black people at a supermarket in a racist rampage, Ms. Stefanik is under scrutiny for campaign advertisements she has circulated that play on themes of the white supremacist “great replacement” theory. That belief, espoused by the Buffalo gunman, holds that the elite class, sometimes manipulated by Jews, wants to “replace” and disempower white Americans.

Last year, in an ad on Facebook, Ms. Stefanik accused “radical Democrats” of planning what she described as a “PERMANENT ELECTION INSURRECTION.”

“Their plan to grant amnesty to 11 MILLION illegal immigrants will overthrow our current electorate and create a permanent liberal majority in Washington,” the ad said.

“Amnesty” above is a key word for the Times. For a decade the paper has tried to justify amnesty for illegal immigrants to get them "out of the shadows," and insisted that Republicans were wrong to use the term. Now the paper apparently thinks the Buffalo tragedy is the news hook to shame Republicans into no longer talking about the issue.

Now, she proudly describes herself as an “ultra MAGA” warrior and aggressively appeals to the hard right, sounding nativist themes that animate the Republican base.

The racist massacre, which unfolded in her own state, has shone a spotlight on Ms. Stefanik. In the days since, Democrats and even some Republicans have suggested that Ms. Stefanik and her party have stoked the beliefs that led to the killings....

The reporter lamented Stefanik and other Republicans were "largely silent" about the racism of the shooter and how Stefanik failed to apologize "for the nativist language and themes she has amplified."

Like Mr. Trump, Ms. Stefanik’s response when under fire is to attack her attackers. Like Mr. Trump, she vehemently defends herself against charges of holding any racist views, while at the same time using rhetoric that energizes far-right and fringe groups.

Karni buried Stefanik’s sensible response to the story's lead paragraph smears in paragraphs 15 and 16, in which Stefanik noted Biden's call for a pathway to citizenship for 11 million "undocumented," and a proposal to give 800,000 noncitizens the right to vote in New York municipal elections.

In paragraph two, Karni claimed Stefanik described Democrats as "pedo grifters" and claimed it was borrowed from Q-Anon Satanic-conspiracy lingo. Five columns later, we learn "On Monday people close to her said her reference to 'pedo grifters' had not been to Q-Anon but to John Weaver, a Never Trump operative who had made sexual overtures to young men."

The Times now carries a snippy "correction," sticking to the Q-Anon link:

Her posting, borrowing language from the baseless pro-Trump Q-Anon conspiracy theory, referred to “Democrats and the usual pedo grifters.” It did not describe Democrats as “pedo grifters.”