NY Times Goes to War on Tucker Carlson: ‘Most Racist Show in History of Cable News’

The New York Times is running a three-part expose of Fox News show host Tucker Carlson. sub-titled “American Nationalist,” delivered by a staggering ten-person research/reporting crew led by reporter and MSNBC contributor Nicholas Confessore, including an exhaustive analysis of 1150 episodes of Tucker Carlson Tonight that ran from November 2016 through 2021.

Confessore relied on anonymous sourcing and hostile characterizations of the host’s populist- conservative opinions to bluntly declare both his show and Carlson himself as racist. The headline to Part 1, blared on Sunday's front page, set the tone for this extraordinarily long and completely hostile series, one of the longest things your scribe can remember reading from the Times: “How Tucker Carlson Stoked White Fear to Conquer Cable News.”

Without even a nod to journalistic strictures, Confessore, with a background in liberal journalism, seemed to have personal animus against Carlson.

….Mr. Carlson has constructed what may be the most racist show in the history of cable news -- and also, by some measures, the most successful. Though he frequently declares himself an enemy of prejudice -- “We don’t judge them by group, and we don’t judge them on their race,” Mr. Carlson explained to an interviewer a few weeks before accusing impoverished immigrants of making America dirty -- his show teaches loathing and fear. Night after night, hour by hour, Mr. Carlson warns his viewers that they inhabit a civilization under siege -- by violent Black Lives Matter protesters in American cities, by diseased migrants from south of the border, by refugees importing alien cultures, and by tech companies and cultural elites who will silence them, or label them racist, if they complain.

Migrants did cross the border without the aid of COVID passports, some surely carrying the Coronavirus. BLM protests often devolved into riots. And the bias of tech companies and cultural elites against conservatives is undeniable. 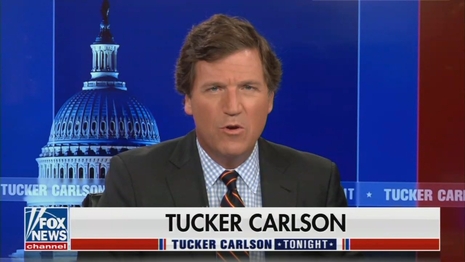 The Times may loathe right-wing populism and railing against “the elites” and the “ruling class” but did not attack left-wing populists like Jim Hightower or James Carville for using the same rhetoric. (It’s a harder argument to make, now that the left undeniably holds the highest perches of the press, popular culture, even big business.) Surprisingly little hay was made about another of Carlson’s alleged moral failings, vaccine skepticism.

….His turn to flagrantly racist ideas has baffled and saddened some longtime associates there, spurring a veritable cottage industry of profiles exploring whether Mr. Carlson’s show is merely lucrative theater or an expression of his true values….

The problem with calling Carlson’s show racist is that it implicates a large number of viewers too. Does the Times think Carlson’s viewers racist?

The Times used voluminous analytical tools to “prove” Carlson had on few guests who disagreed with him -- as if the Times (or liberal hosts like MSNBC’s Rachel Maddow) is a hotbed of disagreement and not a left-wing hivemind hostile to dissent.

It rings false for a newspaper that proudly upholds traditional liberal values to hammer Carlson for calling out “the elites” and “the ruling class,” two long-time enemies of liberalism. There’s nothing here of Carlson’s less traditionally conservative attitudes, nothing of his hailing liberal Sen. Elizabeth Warren’s anti-big business stance, and very little on his anti-war stance besides painting him as a sycophant of Vladimir Putin.

Adding a soupcon of potential doxing to the mix, Confessore even included creepy details of the exterior of Carlson’s recording studio in Maine.