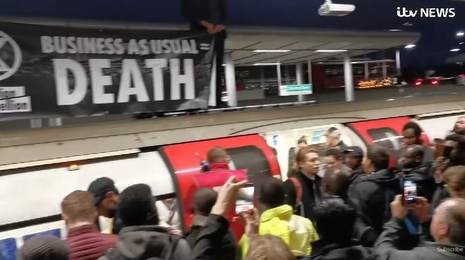 Melissa Godin is a climate activist using the tools of journalism to further her goals, and the New York Times gives her priceless space in its news pages to place an obscure environmentalist radical on a pedestal in Wednesday’s edition: “Farhana Yamin’s Journey From Climate Summits to Street Protests.”

Without a bit of journalistic balance, Godin's profile praised Yamin’s work in Extinction Rebellion, an environmental group so radical it thinks Greenpeace is complicit in the climate crisis. The Times won’t let you know about the group's radical and frankly scary End Times preaching and fanaticism, described by Spiked Online as “an upper-middle-class death cult....a millenarian movement that might speak of science, but which is driven by sheer irrationalism.”

Admittedly, Godin knows how to craft a lead sentence, albeit in praise of the hard-left end-time environmental fanatics (as shown, Extinction Rebellion’s modus operandi is disrupting the lives of ordinary people). But such fanaticism is rather less amusing in a time of rising energy prices, which would skyrocket even higher if ER and their ilk have their way.

It took 20 minutes for police officers to unglue Farhana Yamin from Shell’s offices in London.

It was April 2019 and Ms. Yamin was one of many protesters from the global environmental movement Extinction Rebellion occupying the streets of central London and calling on the British authorities to take climate action...

Canadian truckers would have appreciated similar kind treatment of their own road-clogging protests.

She is also a leading author for the Intergovernmental Panel on Climate Change and was a key architect of the Paris climate agreement. Ms. Yamin is widely seen as responsible for securing, through behind-the-scenes diplomacy, a central element of the pact: The goal of net-zero emissions by midcentury.

After the agreement, though, as Donald J. Trump rose to power in the United States and other countries continually delayed strong action on climate change, she said her faith in institutions began to crumble.

Is there nothing Trump can’t do?

This “news” story doesn’t get into how Extinction Rebellion actually acts – climbing on top of subway trains during rush hour, etc.

….Instead of returning to climate diplomacy, Ms. Yamin joined the nascent Extinction Rebellion movement, a decentralized group that uses nonviolent action and civil disobedience, in 2018.

Making the lives of normal people miserable by blocking their way to work seems to be Yamin’s highest goal in life, besides getting hip with the kids.

Initially, Ms. Yamin became the leader of Extinction Rebellion’s political team....Even in her new activist role, though, Ms. Yamin felt she was relying too heavily on her intellectual skills instead of putting her body on the line. When an Intergovernmental Panel on Climate Change report was issued in October 2018, Ms. Yamin was reading the report as activists filled Parliament Square in London. As she saw pictures of young people refusing to move and waiting to be arrested, she thought, “I want to be with them.”

When asked how she feels looking back at her career, Ms. Yamin paused. “I’m proud of my achievements,” she said. “But I can’t keep carrying on doing that in the face of known indifference.”

Times reporters have fawned over the radical group in the past. Anne Barnard predictably cheered on Extinction Rebellion in an October 2019 story, “Disrupting Business as Usual to Bring More Attention to Climate Change.”