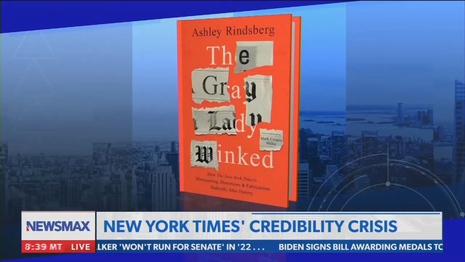 As Russia wages unilateral war on Ukraine, Russian dictator Vladimir Putin is rightly seen by most everyone as a malign force, including the New York Times. But the Times hasn’t always aligned against history’s dictators and strongmen.

While one of the Times’ most common charges against former President Donald Trump was his alleged soft spot for authoritarian leaders like Putin, the Times historically has shown a similar soft spot for dictators, as richly documented in Ashley Rindsberg’s book The Gray Lady Winked (published under his own imprint, Midnight Oil).

Winked focused on the paper’s misguided, sometimes malign coverage of historical events, wars and the rise of dictatorial leaders, from Adolf Hitler in Germany and Joseph Stalin in Russia to Vietnam and the Iraq War, under the auspices of the Ochs-Sulzberger family who have run the paper since 1896.

It's a deep dive into the fascinating, often appalling history of the paper’s coverage of historical tragedies like the rise of Nazism in Germany and Soviet Communism.

Reporter Frederick Birchall downplayed Jewish repression and racist violence at the infamous 1936 Berlin Olympics. Besides headlines like “Greatest Athletic Show in History,” some woefully bad predictions about Nazi Germany were made by the paper in the run-up to the Olympics, including that it would be the “last chance for racial intolerance” in Germany.

Besides the book’s own powerful content, Winked gave valuable pointers that led this reader to some stunning past pieces. How is this for a woeful prediction, from March 1933?

Frederick T. Birchall, chief European correspondent of THE NEW YORK TIMES, told a nation-wide radio audience, in an address rebroadcast yesterday from Berlin, that there was no cause for general alarm in the ascendency to power of Adolf Hitler and his brown-shirted Nazis.

Rindsberg wrote “The New York Times’s post-Olympics reporting was in lockstep with Nazi propaganda efforts, even if the paper’s motives were not the same as the Reich’s.”

Walter Duranty penned this gross metaphor about the appalling deaths resulting from Soviet collectivization, writing in a dispatch from Moscow in 1933, "But -- to put it brutally -- you can't make an omelet without breaking eggs.”

“Journalistic superstar” Duranty purposely missed the man-made Ukrainian famine engineered by the Soviet Union, known as the Holodomor, which cost at least 4 million lives. Duranty won a Pulitzer Prize for his reporting, a blood-stained prize the paper still refuses to concede.

The Times man in Havana, Herbert Matthews, famously met renegade Fidel Castro in the mountains of Cuba in 1957. Matthews welcomed Castro’s January 1959 revolution under the headline “Cuba: First Step to a New Era.” In purple prose, Matthews claimed Castro encapsulated the will of the Cuban people and even claimed his program “amounts to a new deal for Cuba, radical, democratic and therefore anti-Communist.” Again, yikes.

The author seemed most personally appalled by the Times’ treatment of The Holocaust. Despite a Jewish family running the Times, the paper felt no obligation to cover what the paper itself called the “greatest mass slaughter in history” -- in a story buried on page five.

Rindsberg argued that the paper's publishing family purposely kept Holocaust coverage muted because they were Jewish themselves, and that publisher Arthur Hays Sulzberger didn’t feel he could risk having his paper appear a “Jewish newspaper.”  A story about the liberation of Auschwitz lacked the word “Jew.”

Coming up in Part Two of our review: More gross anti-Israel bias and the emergence of the paper’s internal “woke” brigade.