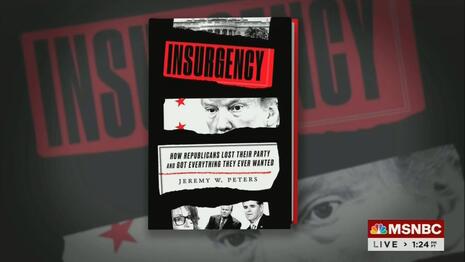 Insurgency, the latest in the endless line of anti-Trump tomes, is by New York Times reporter Jeremy Peters, a conservative-beat reporter who regularly wages war on conservative media “propaganda.” The book’s full title, Insurgency: How Republicans Lost Their Party And Got Everything They Ever Wanted, mades Peters’ message clear: The GOP gained Donald Trump and lost its soul.

One of the Library of Congress subject headings in the front of the book is revealing; the book’s subject is apparently “Right-wing extremists.” An underlying theme of Insurgency is that the party had become captive to its “far-right,” anti-immigrant, race-baiting flank.

Insurgency begins and ends with the Capitol Hill riot of January 6, interviewing Congressman Adam Kinzinger (R-IL) at the start and Congresswoman Liz Cheney (R-WY) at the end, both liberal media heroes and Trump-camp villains. Though he was elected to Congress during the Tea Party wave of 2010 (sorry, “that anvil of resentment and rage”), Kinzinger saw an “ugly, irrational side to many of his Tea Party allies.” How convenient for Peters.

Peters poses Sarah Palin -- who made waves and attracted mass media hostility after the McCain campaign picked her to be his running mate in 2008 -- as the proto-Trump receptacle of white right-wing grievance. He shows fleeting glints of class sympathy for Palin, whose dismissal as “valley trash” and a “whack job” rankled.

But to Peters, the only truly decent Republican is a moderate Republican. He dredges up a name you may have forgotten from the Tea Party’s heyday, like Dede Scozzafava, a moderate New York State Republican and, in this biased account, one of the first victims of the movement when she ran for Congress. Peters clearly loves the “Rockefeller Republican” and “textbook public servant,” with her “intellectual curiosity” and “warm, gentle way about her.” (She is of course a liberal on abortion and gay rights.) Scozzafava lost in the Republican primary.

Peters found the “undeniable dark side” of the Tea Party movement in the controversy over the so-called Ground Zero Mosque from summer 2010, or as Peters has it, the Muslim “community center” that included “a space where Muslims can pray.” Don’t call it a mosque!

Worst yet, Peters tastelessly blames the late Andrew Breitbart for lowering journalistic standards and giving “conservatives a playbook for how to level racially charged attacks without expressing any remorse about it.”

Ah, yes, the mainstream press operated fairly and flawlessly until the Tea Party and Breitbart came along.

The nutty Pizzagate and Obama’s birth certificate conspiracies are covered, as if those oddball views haven’t been aired out by the mainstream press ad nauseum.

Speaking specifically of the late conservative talk radio icon Rush Limbaugh, Peters whines that Trump was protected by his “praetorian guard in the right-wing media,” as if the Clintons and the Obamas (and now the Bidens) never had armies of passionate defenders in the networks news, CNN, MSNBC, The Times, etc.

The book does serve as a useful reminder of how long Trump has been a cultural-political figure: Trump got involved in the Ground Zero mosque debate from a real estate angle, offering to buy the building. Trump had not even heard of the Conservative Political Action Conference until 2011 and his initial appearance there was sponsored by the gay conservative group GOProud. Trump trademarked his famous Make America Great Again slogan on November 19, 2012, two weeks after Republican candidate Mitt Romney lost to Obama. And the rest is history.

Coming up in two of our review: What Peters thinks of Fox News, MSNBC, and the Clintons.