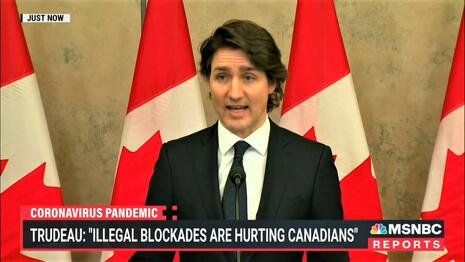 The New York Times continued to smear the Canadian truckers’ protest against vaccine mandates, a protest that has attracted other Canadians, sick of the country’s overzealous Covid regulations under smug liberal leader Justin Trudeau.

Three new trucker stories demonstrate that the tone the paper takes covering protests depends on whether that particular protest pleases the left or the right wing, including: “Ottawa Truck Convoy Drags On, Fueling Protests in New Zealand and Australia” by Dan Bilefsky, Ian Austen, and Natasha Frost.

Most of the protesters and the organizers are clearly on the fringe, with some even wearing Nazi symbols and desecrating public monuments. But others who have arrived in Ottawa describe themselves as ordinary Canadians driven to take to the streets by desperation after nearly two years of pandemic restrictions.

This sudden concern for small businesses was rich, considering how the paper ignored the plight of burnt-out businesses and shuttered shops that occurred after mass rioting on the streets of American cities connected to George Floyd-inspired protests.

The occupation has forced many business owners in Ottawa to close their doors, losing tens of millions of dollars in the process. Those who have stayed open have seen little business, as few people can or are willing to access the city’s downtown area.

An online report by Bilefsky and Austen sported the incredible headline, “Why hasn’t Justin Trudeau ordered the police or army to quash the protests?”

The hypocritical left is certainly impatient with free speech when the wrong things are being said, and the Times is asking the same question: Where are the thugs -- I mean, the cops, when you need them to squelch right-wing protest? 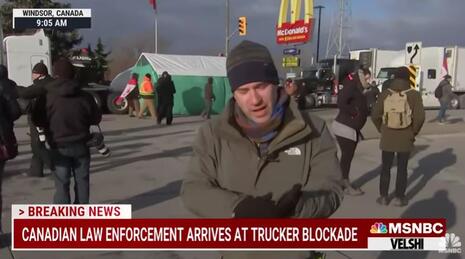 Why, some Canadians are asking, hasn’t he just ordered in the police or the army to quash the demonstrations? After all, he is the most powerful person in Canada, and has lashed out against the protesters for desecrating war memorials, flying “racist flags,” spreading disinformation and even stealing from the homeless.

Remember the Times drove out opinion editor James Bennet in the summer of 2020 for running an op-ed by Republican Sen. Tom Cotton that advocated sending in the National Guard to protest cities from rioting. Betraying its tolerance for left-wing criminals, it even ran a story criticizing law enforcement for tracking down a couple who set fire to a school in Minneapolis during the racial rioting of summer 2020.

Now it wonders why Canada’s leader hasn’t called in the cops to break-up a vaccine-mandate protest. How the Times has changed.

The reporter seems pleased that Canadian provincial leaders are getting tough on protesters, having obtained a court order to break up the blockade. Austen highlighted the most extreme icons from the protest, a habit the paper never uses for liberal protests, who are invariably portrayed as a diverse collection of ordinary folks just out for the day.

But there have been other overtones to the protests as well: Confederate flags and Canadian flags defaced with swastikas, a signal of the involvement of people linked to far-right and racist causes.