A Thursday New York Times story by reporter Nick Corasaniti, set up as if to coolly analyze the state of U.S. “voting rights,” ended up the usual Times tissue of gross exaggerations and aspersions of Republican racism: “Voting Rights Tracker: What to Know About the U.S. Elections Fight.” 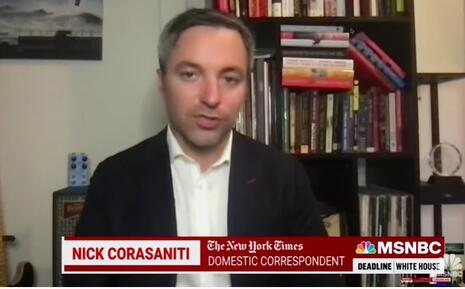 The current battle over voting rights -- who gets to vote, how votes are cast and counted, who oversees the process -- has turned what was once the humdrum machine room of United States democracy into a central partisan battlefield with enormous stakes for the future of American democracy.

Since the 2020 election, and spurred in large part by former President Donald J. Trump’s oft-repeated lie that a second term was stolen from him, the Republican Party has made a concerted new effort to restrict voting and give itself more power over the mechanics of casting and counting ballots.

Corasaniti thinks you should be panicking and accusing Republicans of racism, something he has experience doing.

Why are voting rights an issue now?

The 2020 election saw a sea change in voting habits. Driven largely by the pandemic, millions of Americans embraced voting early in person and voting by mail.

“Voting habits” implies picking from a menu of available options, when in fact many voting rules (e.g. drop boxes) were altered in 2020 using the excuse of the pandemic.

What are Republicans trying to do?

Republicans have often sought to limit absentee-ballot drop boxes by claiming without evidence that they are susceptible to fraud….

That’s interesting, given that the Times provided its own evidence in 2012 about the potential for vote fraud by mail.

Then Corasaniti really went wild, harkening back to the shameful past to suggest today’s Republican Party was pushing a slightly modified form of the anti-black racism that Democrats used to keep blacks from voting before the Civil Rights era.

Why are these legislative efforts important?

They have fueled widespread doubts about the integrity of American elections and brought intense partisan gamesmanship to parts of the democratic process that once relied largely on orderly routine and good faith.

That's funny -- "intense partisan gamesmanship" could describe the liberal media on this subject. And then:

Some are also likely to affect voters of color disproportionately, echoing the country’s long history of racial discrimination at the polls, where Black citizens once faced barriers to voting including poll taxes, literacy tests, intimidation and impossible hurdles, like guessing the number of butter beans in a jar.

The newest restrictions are not so draconian, but could have outsize effects in racially diverse, densely populated areas. In Georgia, the four big counties at the core of metropolitan Atlanta -- Fulton, Cobb, DeKalb and Gwinnett -- will have no more than 23 drop boxes in future elections, down from the 94 available in 2020.

And how many “drop boxes” did Georgia have in 2018? That would be zero. They were allowed under pandemic rules but are now apparently a permanent fixture on the electoral landscape.

Like every other liberal outlet, Corasaniti quoted the Brennan Center, an unlabeled leftist group, on “significant” voting restrictions that frankly didn’t sound all that frightening, in many cases merely resetting things to where they were, way back in the dark ages of 2018:

Texas forbade balloting methods introduced in 2020 to make voting easier during the pandemic, including drive-through polling places and 24-hour voting….

The Times reporter concluded "Democrats hope that their voters will be impassioned enough in response to the new restrictions that they turn out in large numbers to defeat Republicans in November." Yes, that's also the hope of liberal reporters, who constantly compare a modest return to regular voting rules as "Jim Crow on steroids."