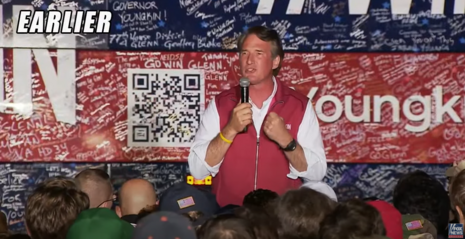 Youngkin has a lead outside the margin of error in at least one poll in the runup to Tuesday’s vote, which is doubtless why alarmed stories like the one in Saturday’s Times are appearing now.

For months as he campaigned for governor of Virginia, Glenn Youngkin tried to sound a lot like the kind of Republican who dominated the party back in 2009 -- the last time a Republican was elected to statewide office.

He avoided discussion of divisive social issues in favor of praise of free markets and job creators, and conservative activists knew very little about him or what he believed as a result.

In the final days before the election on Tuesday, many Republicans say they still have no idea what Mr. Youngkin really believes. But they have cheered him on regardless, after he took a hard-right turn and began promoting the causes that are animating conservatives and supporters of the former president, from the debate over teaching the impact of racism to transgender rights in schools.

To Mr. Youngkin’s critics, his culture warrior persona is cynical and disingenuous -- just the kind of transactional decision that a career investment manager with a fortune estimated at close to $400 million would make to win.

But to his Republican supporters, whether or not it’s an act isn’t really the point.

As long as Mr. Youngkin is saying what they want to hear and signaling what they understand he cannot say out loud -- running on the issue of “election integrity,” for instance, rather than wholeheartedly accepting Mr. Trump’s lies about election fraud in 2020 -- many conservatives see his campaign as providing a template for how to delicately embrace Trumpism in blue states.

Mr. Youngkin’s Republican detractors, however, see an opportunistic politician pandering to the party’s base.

“Whether he believes in this Trump stuff or if he’s trafficking in it, I don’t know,” said David Ramadan, a former Republican member of the Virginia House of Delegates who now teaches at George Mason University. “But if he doesn’t really believe this stuff and is just trafficking in it,” Mr. Ramadan added, “that’s worse than believing it.”

He sprinkled on some traditional New York Times red flags, like “angry parents” and Republicans “seizing” on an issue.

As the country’s culture wars reached a boiling point earlier this year, angry parents in Loudoun County denounced school administrators for implementing a curriculum that they said taught white students they were racist. Mr. Youngkin seized on the issue, surprising conservatives who assumed he was more in the mold of Republicans who have fallen out of favor with the activist base.

Next he spread the usual liberal falsehood about Critical Race Theory:

Mr. Youngkin has also vowed that if elected, he would ban the teaching in public schools of critical race theory, an academic body of thought about the effects of systemic racism that has galvanized conservatives around the country. It is generally not introduced until college and is not part of classroom teaching in Virginia.

CRT can in fact be found in elementary schools.