Seriously, NY Times? ‘The Right’s Big Lie About a Sexual Assault in Virginia’ 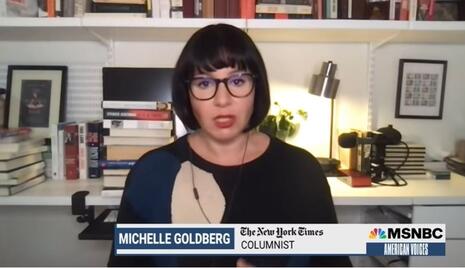 New York Times columnist Michelle Goldberg wrote offensively about a sexual assault of a girl that took place in a girls' bathroom at school. The assault, committed by a fellow student, a boy in a skirt, happened at a school in Loudoun County, Virginia. But the story was initially hushed up, possibly to avoid criticism from trans-extremists.

Liberal Goldberg spun hard to minimize the story’s damage to conservative targets like school boards and Democratic gubernatorial candidate Terry McAuliffe, who is currently locked in a tight race with Republican Glenn Youngkin: “The Right’s Big Lie About a Sexual Assault in Virginia.”

“Big Lie” is a reference to Adolf Hitler’s idea of a lie so enormous that it’s perversely easier to believe than a small lie. Why Goldberg thinks the concept applies to an anguished father’s story about a sexual assault on his daughter is an open question.

This is a story about how the right twisted the sexual assault of a teenager into a culture war fantasy. It’s about how a distorted tale on a conservative website became grist for a nationwide moral panic.

On June 22, a middle-aged plumber named Scott Smith was dragged, lip bleeding and hands cuffed behind his back, from a raucous school board meeting in Loudoun County, Va. According to the local newspaper Loudon Now, he’d been swearing loudly at another parent and leaning toward her with a clenched fist when the police tackled him and pulled him outside….

Soon, however, Smith revealed why he’d been so distraught. In an interview with The Daily Wire, a website co-founded by the conservative wunderkind Ben Shapiro, Smith said that his ninth-grade daughter had been sexually assaulted in a school bathroom by a boy wearing a skirt. Smith was opposed to a proposed policy allowing trans kids to use bathrooms aligned with their gender identities, believing it made girls like his daughter vulnerable.

….In July, the boy was arrested in the attack on Smith’s daughter and charged with two counts of forcible sodomy. But pending a hearing, he was allowed to enroll at another high school while wearing an ankle monitor. In early October he was arrested again, this time for allegedly forcing a girl into an empty classroom and touching her inappropriately.

Goldberg worked desperately (as have others in the media, like Jon Ward’s hostile piece on Yahoo! News) to neutralize the story.

Outrage over the assaults has loomed over the Virginia gubernatorial race, where the Republican candidate, Glenn Youngkin, has sought to harness parental anger toward school boards accused of putting left-wing dogma above student welfare….

Goldberg set up what she thought were a series of devastating reveals.

But this week, during a juvenile court hearing, a fuller picture of Smith’s daughter’s ordeal emerged. She suffered something atrocious. It had nothing at all to do, however, with trans bathroom policies. Instead, like many women and girls, she was a victim of relationship violence.

A boy in a skirt entered a girl’s bathroom…but it has nothing to do with “trans bathroom policies”?

Smith’s daughter testified that she’d previously had two consensual sexual encounters with her attacker in the school bathroom. On the day of her assault, they’d agreed to meet up again….

The boy was indeed wearing a skirt, but that skirt didn’t authorize him to use the girls’ bathroom....

Evidently the school districts bathroom policies weren’t approved until months after the assault.

The Loudoun County school board’s shameful silence; the possibility the assault was hushed up to avoid the wrath of trans activists; the gross irresponsibility of allowing boys free access to girl’s safe spaces in the first place….all these points Goldberg studiously ignored in the name of chipping away at a story that may prove devastating to the election hopes of Terry McAuliffe.

Goldberg ended as she began, conveniently (for Democrats in Virginia) dismissing the sordid story as a “useful lie.”

A sad and complicated truth is probably no match for an exquisitely useful lie.