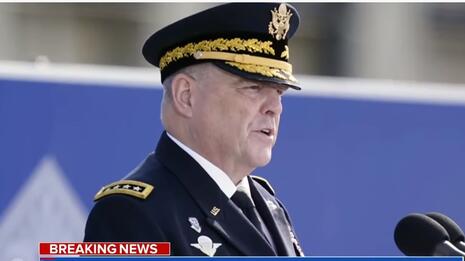 But national security correspondent Michael Schmidt glossed over the book’s biggest alleged bombshell: That the nation’s top military officer, Gen. Mark Milley, chairman of the Joint Chiefs of Staff, supposedly promised to provide China, a foreign rival, a heads-up if any attack was coming.

Such a secret promise to undermine civilian control of the military sounds akin to sedition, and would if true help vindicate “Deep State” concerns from Trump supporters. Yet the Times didn’t even notice.

The chairman of the Joint Chiefs of Staff twice called his Chinese counterpart in the final months of the Trump administration to reassure him that Donald J. Trump had no plans to attack China in an effort to remain in power and that the United States was not collapsing, according to “Peril,” a new book by the Washington Post reporters Bob Woodward and Robert Costa.

“Things may look unsteady,” the chairman, Gen. Mark A. Milley, told Gen. Li Zuocheng of China on Jan. 8, two days after Mr. Trump’s supporters stormed the Capitol to try to stop the certification of his election loss and in the second of two such calls. “But that’s the nature of democracy, General Li. We are 100 percent steady. Everything’s fine. But democracy can be sloppy sometimes.”

Read the above carefully. There were two calls. Schmidt quoted from the last one, after the January 6 invasion of the Capitol. What about the first of the alleged phone calls, allegedly undertaken October 30, 2020? There are no quotes from that one. Were Millay and Li just talking about the weather?

In the days leading up to the 2020 election, the book reveals, American intelligence showed that the Chinese believed that Mr. Trump planned to launch a military strike to create an international crisis that he could claim to solve as a last-ditch effort to beat Joseph R. Biden Jr.

General Milley, who had become increasingly concerned about China’s growing military power and the potential for one misread move to set off combat between the world superpowers, first called General Li around that time on a secret backchannel. He wanted to assure General Li and President Xi Jinping that the United States was not planning to attack China.

The quotations below were taken from the Associated Press, relaying what the book claims Milley told his Chinese counterpart General Li Zuocheng.

Yet Schmidt failed to run any quotes from that first alleged phone call, though virtually every other news outlet found the quotes compelling. He then skipped to the second call.

On the Jan. 8 call, General Li suggested that Chinese leaders feared that the United States government was unstable. He pressed General Milley over the course of an hour and a half about whether the military was going to take action.

Despite General Milley’s reassurances, he feared that Mr. Trump might be trying to find a moment that he could seize on to remain in power, similar to Hitler’s exploitation in 1933 of an arson fire at the German Reichstag to help institute emergency powers, the book said.

There’s also nothing about the liberal hero Retired Army Lt. Col Alexander Vindman, a witness in Trump’s first impeachment, who said Milley “must resign” if he really did call his counterpart in China.