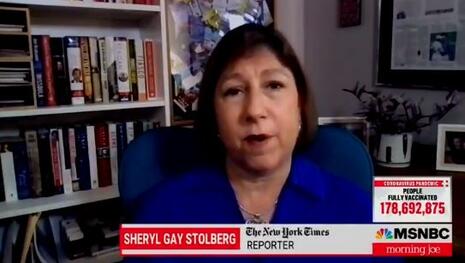 Sheryl Gay Stolberg, a long-time reporter at the New York Times who now covers health policy, scoffed at Republican opposition to Biden’s vaccination mandates against businesses on the front of Monday’s edition under the sneering headline, “G.O.P. Seethes, But Every State Requires Shots -- Fury at Biden Ignores a Century of Rules.”

Like other Republican governors around the country, Tate Reeves of Mississippi reacted angrily to the coronavirus vaccine mandates President Biden imposed on private businesses. Declaring the move “terrifying,” he wrote on Twitter: “This is still America, and we still believe in freedom from tyrants.”

The second paragraph of this “news” story dove straight into Stolberg’s opinionizing.

There is a deep inconsistency in that argument. Mississippi has some of the strictest vaccine mandates in the nation, which have not drawn opposition from most of its elected officials….

Resistance to vaccine mandates was once a fringe position in both parties, more the realm of misinformed celebrities than mainstream political thought. But the fury over Mr. Biden’s mandates shows how a once-extreme stance has moved to the center of the Republican Party. The governors’ opposition reflects the anger and fear about the vaccine among constituents now central to their base, while ignoring longstanding policy and legal precedent in favor of similar vaccination requirements.

Mr. Biden also imposed vaccine mandates on federal workers and many health care workers. But Republican outrage is really boiling over his plan to require all private-sector businesses with more than 100 employees to mandate vaccines or weekly testing for their work forces.

Stolberg glossed over how Biden as a candidate promised he would not impose a vaccine mandate. Also missing was the irony of giving Biden a pass on these harsh requirements on private businesses, even while the Times attacks Texas’s new abortion law as harshly restrictive.

Stolberg was certainly confident the law would end up supporting Biden’s using the Occupational Safety and Health Administration (OSHA) to mandate citizens get jabs in their arms.

Experts in public health law agree that Mr. Biden is on solid legal footing, because his actions are grounded in federal workplace safety laws. They say Republican governors who insist that vaccine mandates are an intrusion on personal liberty need a refresher on their own state policies.

Stolberg noted that many opposing GOP governors have encouraged their citizens to get vaccinated, as if it was some kind of hypocrisy in supporting vaccination without resorting to force. She tried to shape Biden’s action to sneak it past constitutional muster.

Mr. Biden did not impose a national mandate. He took a series of specific, limited actions that legal experts agree are within his purview as president.

Then the mask (pardon the reference) briefly slipped:

But public health experts say the safety of the community supersedes personal liberty when everyone is at risk from a communicable disease.

Stolberg appeared on MSNBC’s Morning Joe on Monday to discuss the piece and spoke out passionately against personal choice...on vaccines, anyway.

Getting vaccinated is not a personal choice, it’s not. It’s something that we do for the community….your personal choice ends where my right not to get killed by an infectious disease begins.

It's as if this health expert doesn't know her own vaccinations should stop her from being “killed" by Covid.