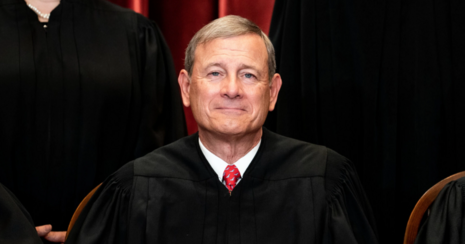 Hulse reliably adhered to Democratic talking points that exaggerated the difficulties of voting. He passed along condescending insults of Roberts throughout his Sunday piece. He also dropped a truly blatant labeling bias bomb.

When Judge John G. Roberts Jr. faced the Senate for his Supreme Court confirmation hearing in September 2005, critics sounded the alarm about his longstanding skepticism toward the 1965 Voting Rights Act, which many view as crucial to the political gains of Black Americans over the last half century.

Among those critics was Rep. John Lewis, the late civil rights leader from Georgia.

Judge Roberts was easily confirmed by the Republican-controlled Senate despite pleas from Mr. Lewis and other civil rights activists. He went on to oversee the court in rulings that weakened the Voting Right Acts, compromising its decades-long role as a protector of minority access to the ballot box across much of the South….

While Mr. Lewis may be gone, House Democrats hope to keep his spirit alive by passing a bill bearing his name next week that they hope will offset what Speaker Nancy Pelosi has called “disastrous” and “shameful” decisions undermining voting rights by the Roberts-led court.

The John Lewis Voting Rights Advancement Act is one element of a two-pronged legislative effort by Democrats to protect minority voting rights. A much broader bill, the For the People Act, would impose an array of requirements on states to expand voting by mail and early voting along with extensive provisions on ethics, campaign finance and redistricting.

The story included this stark labeling bias by Hulse, who has a long history of spinning out encouraging profiles of Democrats and discouraging ones of Republicans. Bias doesn’t come much more direct than the lines in bold below:

In a series of memos that later became public, Mr. Roberts, then a special assistant to the attorney general, argued vehemently against the change….Congressional Republicans, fearing they would be branded as racists should they oppose the change, rejected that view. A compromise measure was approved on a strong bipartisan vote after breaking a Senate filibuster led by Jesse Helms, the archconservative from North Carolina.

At Judge Roberts’s confirmation hearing in 2005, Senator Edward M. Kennedy, Democrat of Massachusetts, pressed him on what Mr. Kennedy characterized as his “narrow and cramped, and perhaps even a meanspirited view of the law” given his comments in 1982….

Hard to miss, isn’t it? While the late Republican Sen. Jesse Helms of North Carolina was “archconservative,” the archliberal Sen. Ted Kennedy of Massachusetts was merely called “Democrat of Massachusetts.” The Kennedy-Helms disparity is a classic labeling contrast the Times has adhered to for decades, even following the senators into their respective obituaries (see: “Ted Kennedy Obit Avoids the Jesse Helms Treatment”).