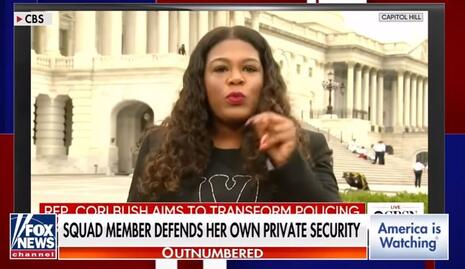 But in his eagerness to crown a new progressive heroine, Fandos flew over Biden’s unconstitutional move. Would Donald Trump have gotten away with restoring a rule already declared unconstitutional?

Representative Cori Bush of Missouri was 20 the first time she was evicted, tossed out by a landlord after a violent fight with her boyfriend.

The next time, she was 29 and had quit a low-wage job to attend nursing school, and could no longer afford her rent.

It happened a third time in 2015, as Ms. Bush threw herself into the protest movement in Ferguson, Mo., after a white police officer shot and killed Michael Brown, a Black teenager. The eviction notice was waiting on her door one night -- prompted, she said, by neighbors who feared she would bring the unrest home with her.

So when it became clear on Friday night that neither Congress nor the White House was going to act to stop a pandemic-era federal eviction moratorium from expiring, leaving hundreds of thousands of low-income Americans at risk of losing their homes, Ms. Bush -- now 45 and a first-term Democratic congresswoman from St. Louis -- felt a familiar flood of anxiety and a flash of purpose.

Bush got her orange sleeping bag and a lawn chair and started her sit-in on the steps of the U.S. Capitol. President Biden caved, announcing a 60-day federal eviction moratorium in certain areas of the country.

Just one little thing: Biden’s new eviction moratorium is unconstitutional. Fandos barely addresses that part, calling it “the risk of an adverse court ruling.” In May, a lower court ruled the CDC had overstepped its authority with its nationwide eviction moratorium, and the Supreme Court agreed. So much for the president’s pledge to support and defend the Constitution.

And off course, no one spoke up for landlords, most of whom aren’t menacing, cruel or even particularly well-off, but are trying to make a living like everyone else.

Even when the Times did bring up criticism of Bush deeper into the story, it was framed as politicized Republican tactics.

And Ms. Bush’s newfound prominence as a symbol of progressive might carried risks for Democrats as well. On Thursday, Republicans began circulating a video clip of Ms. Bush defending her own use of private security she said she hired because of death threats while reiterating calls to defund the police. House Republicans’ campaign arm immediately spliced Ms. Bush’s words into advertisements targeting vulnerable Democrats up for re-election next fall, using them to tie the party to a rise in violent crime.

Still, for now, the eviction fight has offered a welcome taste of vindication for Ms. Bush….

Her critics on the left and right similarly scoffed in recent days at her protest, calling it naïve. Conservative Twitter delighted in making jokes about the unruly sleepover scene on the Capitol’s marble steps….

Near the end there was this heartwarming anecdote of one veteran media heroine embracing a newly minted one.

On Tuesday evening, before Ms. Bush could go live for a round of valedictory television hits and eventually collapse for a decent night’s sleep in her own bed, Senator Elizabeth Warren, the Massachusetts Democrat and progressive standard-bearer, ran up and wrapped her arms around the congresswoman.