NY Times Is SO Disappointed in Trump Critic for Slamming Dems 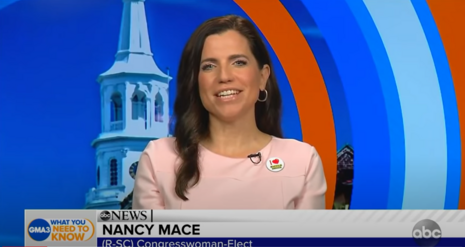 It’s typical liberal media behavior to show new respect for any Republican who criticizes their own party, only to sour on them when they again start towing the party line. Mace’s reversion to standard Republicanism was treated as a betrayal of sorts, worthy of full-page treatment.

Edmondson’s tone was consistently condescending throughout:

Representative Nancy Mace had just delivered the kind of red-meat remarks that would ordinarily thrill the Republican voters in attendance here on a recent sweltering evening, casually comparing liberal Democrats to terrorists -- the “Hamas squad,” she called them -- and railing against their “socialist” spending plans.

She found a Republican critic in the crowd.

[Mara] Brockbank was referring to Ms. Mace’s first weeks in office immediately after the Jan. 6 riot, as the stench of tear gas lingered in the halls of the Capitol and some top Republicans were quietly weighing a break with President Donald J. Trump. Ms. Mace, a freshman congresswoman, placed herself at the forefront of a group of Republicans denouncing Mr. Trump’s lies of a stolen election that had fueled the assault and appeared to be establishing herself as a compelling new voice urging her party to change its ways.

But these days, as Republicans in Congress have made it clear that they have no intention of turning against Mr. Trump, Ms. Mace has quietly backpedaled into the party’s fold. Having once given more than a dozen interviews in a single day to condemn Mr. Trump’s corrosive influence on the party, Ms. Mace now studiously avoids the subject….

And rather than continuing to challenge party orthodoxy, Ms. Mace has leaned in to the most combative Republican talking points, castigating Dr. Anthony S. Fauci, the top health official who is a favorite boogeyman of the right, accusing Democrats of forcing critical race theory on children, and publicly feuding with progressives.

Her pivot helps explain why the Republican Party’s embrace of Mr. Trump and his brand of politics is more absolute than ever. It is not only the small but vocal group of hard-right loyalists of the former president who are driving the alliance, but also the scores of rank-and-file Republicans....

Mace was doing fine when she was criticizing Republicans, but got in trouble with the paper when she challenged obnoxious left-winger Rep. Alexandria Ocasio-Cortez.

Less than a week later, her tone abruptly changed. After joining Representative Alexandria Ocasio-Cortez, Democrat of New York, in a bipartisan request to provide congressional staff aides with more resources to cope with the “trauma” of the Jan. 6 attack, she criticized her colleague for recounting how she feared that rioters had broken into her office building.

“No insurrectionists stormed our hallway,” Ms. Mace wrote on Twitter, touching off a heated back-and-forth.

For a journalist, Edmondson seems incurious and dismissive regarding what conservatives actually think, though at least she let Mace have the last word.

Her still-frequent appearances on television, though -- now mostly on a variety of Fox News shows, as well as the conservative networks OAN and Newsmax -- tend to stick to some of the party’s most well-tread political messages. In a recent interview on Fox News, she asserted that strident liberals had seized control of the Democratic Party.

“They’re in charge,” she said, “which is why we’re seeing what we thought would be a moderate administration take a sharp left turn all of a sudden.”

She also ignored the vandalism of Mace’s South Carolina home just a few weeks ago.