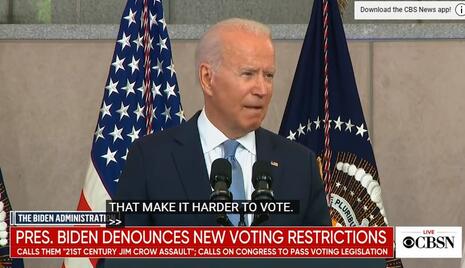 During the Iraq War in 2003 and Barack Obama’s 2008 presidential campaign, the New York Times haughtily defended Democrats against having their patriotism questioned by conservatives -- something which almost never happened.

Yet Democrats are cheered by the Times when they actually slime Republicans and Republican policies as “unpatriotic,” using that exact term, as President Biden did when he went to Philadelphia and spouted incendiary rhetoric.

Biden suggested the fight for ballot security being waged in several states by the GOP was the “most significant test of our democracy since the Civil War,” and that the Republican reform efforts were actually “the most un-American thing that any of us can imagine, the most undemocratic, most unpatriotic.”

None of which got the slightest rise out of the previously sensitive Times, no fact-checking or pushback from the same paper that for years eagerly forwarded the “unpatriotic” smear against conservatives.

In the co-lead story on Wednesday by Katie Rogers, “Biden Portrays A Right to Vote As Under Siege – ‘Have You No Shame?’ He Asks the G.O.P.” the reporter didn’t throw a fit about Biden’s smears.

Neither did reporters David Leonhardt and Ian Prasad Philbrick get huffy about Biden’s smears of the GOP in their “news analysis,” “Biden’s Bully Pulpit and a Texas Duel: What’s at Stake.”

In his Philadelphia speech on Tuesday, President Biden called Republican efforts to limit ballot access “undemocratic” and “unpatriotic.” He said, “We’re facing the most significant test of our democracy since the Civil War.”

There was no condemnation from the reporters, just a discernible hope the tactic would be effective:

Some Democrats hope that presidential attention will persuade Congress to pass a voting-rights bill that prohibits new state laws that Republicans are passing to change election rules and restrict voting. But that’s unlikely.