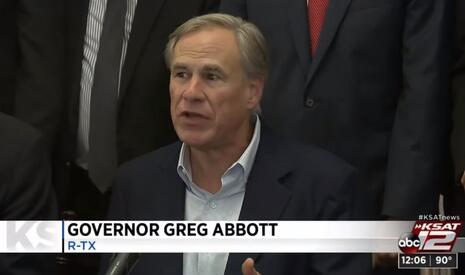 he New York Times’ fear of “ultraconservative” Texas is getting ridiculous in Thursday's story by Nick Corasaniti and Edgar Sandoval, “Texas Governor Pushes State Further to the Right On Voting Rights and Race.”

The paper has made a bad habit of scary stories with scary labeling about how much further to the right Texas has gotten.

Gee, how much room is left on “the right” by now?

The embarrassing fear-mongering and label-hysteria continued on Thursday:

Gov. Greg Abbott of Texas on Wednesday kicked off a high-stakes political fight over the state’s future, formally announcing a special session of the Legislature in which he and fellow Republicans will try to push Texas further to the right on issues like elections and voting, transgender rights and how schools teach about racism.

The special session, set to begin on Thursday, follows an already ultraconservative legislative session this spring, when the Republican-dominated Legislature passed a near-ban on abortion and a law permitting the carrying of handguns without permits, running roughshod over protests from Democrats, business coalitions and civil rights groups in an often strictly party-line manner.

Broadly, Republicans’ full agenda for the special session is sure to inflame Democratic state lawmakers who have already been angered by the Legislature’s rightward turn this year. And even some Republicans remain miffed at the governor’s decision last month to veto funding for the Legislature as a punishment for the Democrats’ decision to flee the Capitol over the voting bill.

Corasaniti and Sandoval dumped a bunch of hostile quotes from hostile Democrats in the Texas House:

State Representative Chris Turner, the chair of the House Democratic caucus in Texas, accused the governor of leveraging the legislative session for his own political gain.

“The governor’s agenda for the special session shows he is more concerned with pandering to die-hard Trump supporters and right-wing extremists than he is with serving everyday Texans,” Mr. Turner said in a statement.

“A lot of people in Texas, they seem to think that there really isn’t a real border at the U.S.-Mexico border, that people are just walking over,” said State Senator José Menéndez, a San Antonio Democrat. While crossings have increased to levels not seen in years, Mr. Menéndez said, a wall would have little consequence as long as people continue to leave their homes in Central America to escape poverty, crime and corruption. “He’s trying to win that Trump base.”

And that effort, Democrats said, came at the expense of other, more pressing issues in Texas.

“I’m furious and I’m embarrassed for the state,” said State Representative Erin Zwiener, who argued that the governor was again trying to bar transgender student athletes from competing in sports while neglecting what she saw as needed reforms to health insurance or regulations to prevent another power grid failure, like the one that killed more than 100 Texans in February.

The state of Texas careening dangerously to the right is a familiar scare tactic at the Times. A 2010 headline: “Taking Texas Primary Even Further to the Right.”

From 2013: “The far-right agenda of grass-roots and Tea Party activists has come to dominate the Republican Party in Texas, turning moderate Republicans into an endangered species for the most part.”

From 2017, with "far right" references going back to 2009: “In a recent interview in his office on the second floor of the Capitol behind the empty House chamber, [“Joe Straus, speaker of the Texas House] sat on a sofa with a tall glass of ice water and calmly paused for several seconds when asked whether Texas had shifted further to the far right since 2009.”