NY Times Page One: How Could Anyone Still Vote GOP After Biden’s Amazing Successes? 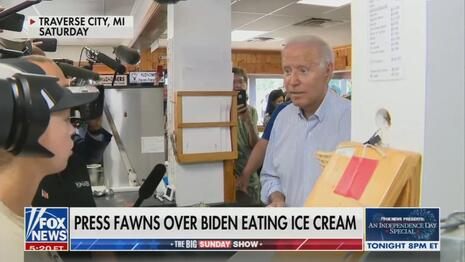 The New York Times off-lead story Monday by national political correspondent Alexander Burns was headlined, “U.S. Surges, But Politics Hold Firm – Partisanship Immune to Signs of Recovery.” But it may as well have been titled, “What Is Wrong With You Trump Voters?”

Flummoxed by Biden’s stubbornly so-so approval rating and continuing GOP strength, as shown in the 2020 elections, despite Biden’s apparently incredible achievements (like the pork-laden infrastructure bill?) Burns lashed out at Trump and his supporters with DNC-approved insults.

In another age, the events of this season would have been nearly certain to produce a major shift in American politics -- or at least a meaningful, discernible one.

Over a period of weeks, the coronavirus death rate plunged and the country considerably eased public health restrictions. President Biden announced a bipartisan deal late last month to spend hundreds of billions of dollars rebuilding the country’s worn infrastructure -- the most significant aisle-crossing legislative agreement in a generation, if it holds together. The Congressional Budget Office estimated on Thursday that the economy was on track to regain all of the jobs it lost during the pandemic by the middle of 2022.

The story was illustrated online with a large photo of President Biden at (of course!) an ice cream shop in Michigan. What a scoop!

Not long ago, such a sequence of developments might have tested the partisan boundaries of American politics, startling voters into reconsidering their assumptions about the current president, his predecessor, the two major parties and what government can do for the American people.

These days, it is hard to imagine that such a political turning point is at hand.

Yet there is little confidence in either party that voters are about to swing behind Mr. Biden and his allies en masse, no matter how many events appear to align in his favor

[Democratic strategist Mark] Mellman said the country’s political divide currently favored Mr. Biden and his party, with a small but stable majority of voters positively disposed toward the president. But even significant governing achievements -- containing the coronavirus, passing a major infrastructure bill -- may yield only minute adjustments in the electorate, he said

Then things got really slanted, with Burns relaying a barrage of Democratic talking points as fact, painting Trump voters as denying the reality of their terrible idol Trump.

American voters’ stubborn resistance to external events is no great surprise, of course, to anyone who lived through the 2020 election. Last year, Mr. Trump presided over an out-of-control pandemic that killed hundreds of thousands of people and caused the American economy to collapse. He humiliated the nation’s top public health officials and ridiculed basic safety measures like mask wearing; threatened to crush mass demonstrations with military force; outlined no agenda for his second term; and delivered one of the most self-destructive debate performances of any presidential candidate in modern history.

Burns blamed Trump for starting identity-politics fights that were in fact instigated by the identity-obsessed left.

Mr. Trump still won 47 percent of the vote and carried 25 states. The trench lines of identity-based grievance he spent five years digging and deepening -- pitting rural voters against urban ones, working-class voters against voters with college degrees, white voters against everybody else -- saved him from an overwhelming repudiation.

Burns had the gall to continue to blame Trump for vaccine skepticism, though it was the Biden Administration that cancelled vaccine appointments by temporarily withdrawing the Johnson & Johnson vaccine from use for dubious safety reasons.

….While Mr. Trump has encouraged his supporters to get vaccinated, his contempt for public health authorities and the culture of vaccine skepticism in the right-wing media has hindered easy progress.

….The Democrats do not have an overwhelming electoral majority -- and certainly not a majority that can count on overcoming congressional gerrymandering, the red-state bias of the Senate….but they have a majority all the same.

There’s less to the supposed Republican advantage in the Senate that Democrats (and their friends at the Times) constantly complain about than meets the eye.