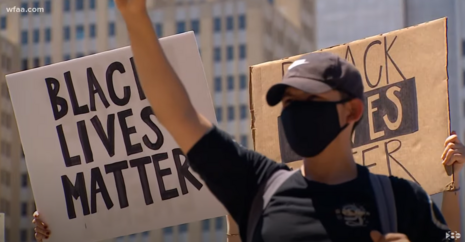 On the New York Times front page Thursday, national political correspondent Alexander Burns spun frantically for the Democrats in his news analysis under a “have your cake and eat it too” headline, “Why Choose? Democrats Seek To Fund and Reform the Police.”

The text box skipped the desperation and division of the current Democratic Party on crime and police issues and skipped blissfully on to future hypothetical success: “Trying to Meld Divisive Issues Into a Potent Political Cause.” The jump-page text box was even more aggressively cheerful on the party’s behalf: “An opportunity to beat the G.O.P. on law-and-order issues.”

Facing a surge in shootings and homicides and persistent Republican attacks on liberal criminal-justice policies, Democrats from the White House to Brooklyn Borough Hall are rallying with sudden confidence around a politically potent cause: funding the police.

Never mind our backtracking from “defund the police.”

In the nation’s capital on Wednesday, President Biden put the weight of his office behind a crime-fighting agenda, unveiling a national strategy that includes cracking down on illegal gun sales and encouraging cities to use hundreds of billions of dollars in pandemic relief money for law-enforcement purposes. His speech represented the most muscular response so far from his administration to a rise in crime that has stricken the country’s major cities.

In New York City, the country’s largest metropolis and a Democratic stronghold, it was Eric Adams, a former police officer who is Black, who rode an anti-crime message to a commanding lead in the initial round of the Democratic mayoral primary on Tuesday.

The back-to-back developments signaled a shift within the Democratic Party toward themes of public safety….

But most Democratic leaders, from the president of the United States to the Brooklyn borough president, have also firmly rejected activist calls to slash police budgets and divert government resources toward other kinds of social services.

Mr. Adams has denounced that approach with open contempt, deriding “Defund the Police” activists as a collection of affluent whites and accusing a progressive rival, Maya Wiley, of focusing on left-wing sloganeering “at a time when Black and brown babies are being shot in our streets.”

That message evidently resonated with Black primary voters: Mr. Adams’s lead in the mayoral race was built on his popularity in the Bronx and working-class Black neighborhoods in Brooklyn that have been hit especially hard by a spike in murders and shootings. That may embolden Democrats who have held back from using law-and-order language for fear of alienating core elements of the party’s base.

Burns seemed confident the Democratic Party can resolve its contradictions and be both tough on crime and tough on police.

….While a majority of the party appears to welcome a message of being simultaneously tough on crime and stringent about police abuse, there is also significant resistance among liberals to policies that might bolster police departments, of which they are deeply distrustful.

In New York, progressives were holding out hope that Ms. Wiley or another candidate could overtake Mr. Adams through the tabulation of ranked-choice ballots. That kind of upset is not entirely out of the question: Mr. Adams has alienated several of the other leading candidates with bitter personal attacks, and he faced serious questions about financial ethics and real-estate interests that fueled antipathy to his campaign….

Burns assured us this change on the part of Democrats was long in the works. Stay calm! All is well!

As early as last November, congressional Democrats were engaged in a pitched debate over the impact of the “defund” movement on down-ballot elections. In the 2020 general election, Republicans savaged Democrats all over the country by linking them with the most strident faction of activists to emerge during a summer of racial-justice protests. Many Democrats were convinced the party’s candidates had suffered as a result, while progressives bristled at what they described as centrist scapegoating.