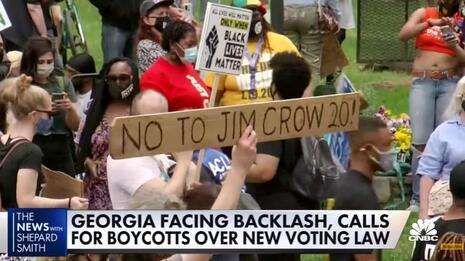 Gov. Brian Kemp indeed did so -- after Georgia-based corporations Coca-Cola, and Delta Airlines condemned the legislation after passage, and Major League Baseball taking the extreme measure to move the league’s All-Star game out of Georgia as part of a boycott.

(One of the controversial measures includes requiring photo identification to cast a ballot. One needs identification to buy a beer at a MLB ballpark or to board Delta Airlines, but consistency has never been the left’s strong suit.)

Gov. Brian Kemp of Georgia on Saturday issued a blistering critique of Major League Baseball’s decision to pull its All-Star Game out of the state over the new law there restricting voting, arguing that the move would deliver an economic hit to Georgians.

Mr. Kemp, a Republican, framed the battle over voting rights in Georgia as a wholly partisan one concocted by Democrats, rather than a civil rights effort to protect access to the ballot as Republicans try to place new limits on voting across the country.

The governor peppered his speech with conservative catchphrases like “cancel culture,” underscoring how Republicans are seeking to make access to voting a wedge issue that they can wrap into the cultural debates that animate the base of the party.

Corasaniti let Kemp have his say, but framed it petulantly:

In defending the law in Georgia, Mr. Kemp singled out two Democratically controlled states, New York and Delaware, and compared their voting regulations with the new law in Georgia. Those states do not offer as many options for early voting as Georgia does, but they have also not passed new laws instituting restrictions on voting.

“In New York, they have 10 days of early voting,” Mr. Kemp said (New York actually has nine). “In Georgia, we have a minimum of 17, with two additional Sundays that are optional in our state. In New York, you have to have an excuse to vote absentee. In Georgia, you can vote absentee for any reason.”

Delta and Coca-Cola, two of the state’s largest corporations, ended weeks of silence on Wednesday, stating sternly that they were against the law.

Political pressure from the left came from the Times along with the rest of the media in lockstep with liberal activists. The paper had previously pressured corporations to cry Uncle, as in this story by business reporter David Gelles: “Corporations, Vocal About Racial Justice, Go Quiet on Voting Rights.”

As Black Lives Matter protesters filled the streets last summer, many of the country’s largest corporations expressed solidarity and pledged support for racial justice. But now, with lawmakers around the country advancing restrictive voting rights bills that would have a disproportionate impact on Black voters, corporate America has gone quiet.

For two weeks, Delta Air Lines and Coca-Cola had been under pressure from activists and Black executives who wanted the companies to publicly oppose a new law in Georgia that makes it harder for people to vote. On Wednesday, six days after the law was passed, both companies stated their “crystal clear” opposition to it.

Now Republicans are mad at the companies for speaking out….