NY Times, Other Outlets Snooze on Sundays Under ‘Tranquil’ Biden: ‘Church Over Covfefe’ 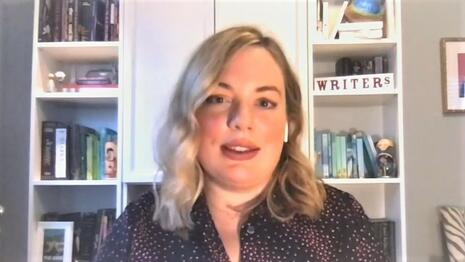 Reporter Katie Rogers’ “White House Memo” in Tuesday’s New York Times, “Washington Basks in a New Event: A Weekend of Tranquility,” revealed the cozy relationship between the press and the new Democratic administration (Biden's bagel run and videogames!) and its unhealthy, ongoing obsession with Donald Trump.

President Biden did not do anything this weekend.

Well, let’s rephrase: President Biden did not do anything alarming this weekend.

There were exactly eight tweets, each one rooted in what can best be described as reality. There was a visit to spend time with an ailing friend, Bob Dole, a former Republican senator. And there was a stop at church with the grandchildren.

Since Mr. Biden assumed office, the weekends have been portraits of domesticity -- MarioKart with the kids at Camp David, bagels in Georgetown and football in Delaware. A Peloton devotee, he hasn’t even played golf….

Rogers quoted Democrat Rep. Ted Lieu catching up on his Netflix binge-watching before moving on to the press.

There is a parallel in the news industry, where reporters covering this new-old version of Washington say they are ready to get back to the type of journalism that does not involve deciphering a human mood ring. CNN and MSNBC, whose journalists and personalities have spent years challenging Mr. Trump’s policies, have quietly reduced the number of Trump-focused journalists working on contract in recent months.

“As the host of a weekly show, the glaring absence of presidential Twitter scandals means I can plan ahead with the expectation that our plan will actually be implemented,” said Brian Stelter, a former New York Times reporter who hosts Reliable Sources on CNN. “Informally, we used to leave a five-minute-size hole in my Sunday show, expecting some sort of big news to break on Saturday night. Now we don’t assume that’s going to happen anymore.”

This weekend, [Olivia] Nuzzi said, she was also surprised to learn that Mr. Biden had quietly gone to church. She realized how much she had been keeping tabs on Mr. Trump’s every move, just in case he upended the news cycle on impulse.

And right-wing extremists are bad for business, as if leftist riots were good:

Amy Brandwein, a chef and the owner of Centrolina, has watched brunchgoers return to downtown on the weekends, but she and other restaurateurs have struggled for nearly a year to regain the business lost because of the pandemic.

She is also afraid that the political turmoil will continue. Ms. Brandwein said her plans to install outdoor bubblelike structures to provide a socially distant dining option were delayed because of the violence at the Capitol on Jan. 6. She estimates she has lost about $100,000 in business on days she had to close because of protests that drew the Proud Boys and other extremist groups.

Mr. Trump may be gone from the capital, but she worries his supporters will still endanger her employees and her business. “I wonder about the security in the future of downtown or generally in D.C.,” she said, “because the Trump movement is still going on.”

The ghost of the former president, banned from social media, still haunts the dreams of D.C. journalists.

As Washington staggers to its feet, it is clear that Mr. Trump is happy to visit the dreams of anyone suddenly getting more sleep.

Rogers, whose "White House Memos" are openly hostile to Trump, really enjoyed recycling the greatest hits of the past administration with liberal hackery that ran in the Times’ increasingly mislabeled “news” section:

In the meantime, a battered and bruised capital has adjusted to life at a calmer pace, with quieter activities and words replacing the obscenities, characters and gibberish that used to shape how the days were spent. Bagels over Bannon. Grandchildren over golf. Church over covfefe.

Didn’t realize the Times was so devout, did you?