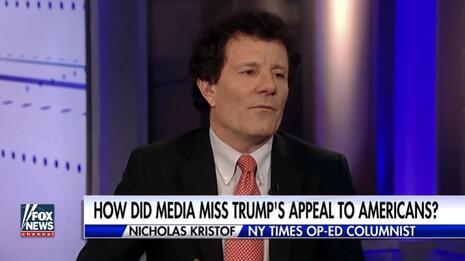 New York Times columnist Nicholas Kristof continued his quest to ban Fox News from basic cable packages in his Thursday opinion, “A Letter to My Conservative Friends.” The contradictory message? Simmer down my Republican friends, there’s nothing to worry about…but kick Fox News out of basic cable packages?

This is an open letter to some of my old friends and neighbors who believe that Donald Trump won re-election, who think that face masks are for wimps and who fear that Democrats are plotting to seize their freedom.

Relax! We liberals aren’t plotting to round you up in “re-education camps.”

I was horrified when a couple of old friends here asked if they were in danger for having supported Donald Trump. I gently told them that they were in no peril -- and I was stung that they felt greatly relieved to hear it.

Yes, I know that Fox News is peddling nonsense about Democrats setting up re-education camps, and that a Wall Street Journal column asked, “If you were an enthusiastic Donald Trump supporter, are you ready to enter a re-education program?”

That link above goes to a dismissive Business Insider story that at least explains that the "deprogramming" charge comes from two actual sources -- liberal shows (“Real Time With Bill Maher” and “Morning Joe”) that suggested conservatives need it.

You’ve been hoodwinked, exploited and manipulated by con artists waving flags, casting lies and monetizing bigotry. Steve Bannon, who suggested beheading Dr. Anthony Fauci, defrauded Trump supporters into donating to build a border wall and then used some of the money for himself, according to a federal indictment.

After first pleading with Republican leaders to realize “extremism is a losing strategy,” Kristof actually admitted he’s recommending potentially dangerous solutions. But hey, it worked against Neo-Nazis and the KKK, so it’s justified against today’s GOP.

Second, to dampen that extremism, advertisers should stop supporting networks that spread lies and hatred, and cable companies should drop channels that persist in doing so. As a start, don’t force people to subsidize Fox News by including it in basic packages.

Is this a slippery slope? Yes, and it makes me queasy. But we all recognize that there are red lines: Neo-Nazis and Ku Klux Klan grand wizards have First Amendment rights, but we shouldn’t pay to give them microphones, nor should commentators on the left or the right get megaphones to promote violence….

But there’s still nothing to fret about, silly Republicans.

So, conservative friends, fear not: We’re not plotting to lock you up in detention camps. We need you to keep us honest. But you’ve been scammed in ways that have hurt the country we all love. Hold us accountable, but please do the same for the charlatans who deceive you, use you and cheat you.

Kristof was on the same “kick out Fox News” kick in his column of two weeks ago, comparing the news networks to Islamic terrorists, while hypocritically posing as open-minded.

I believe deeply in listening to alternative voices, not drowning them out. That’s why I went to extremist mosques in Pakistan, and it’s why I had an account on Parler. But I also saw how fanatical mosques inculcated violence and how Alex Jones, Sean Hannity and Donald Trump used their platforms to spread racism, bigotry and conspiracy theories in ways that made America a more frightening place.

They have First Amendment rights, but not a right to advertising or to private platforms. So I’d like to see pressure on advertisers to withdraw from Fox News so long as it functions as an extremist madrasa, and cable providers should be asked why they distribute channels that peddle lies.

Kristof doesn’t bring up past and present wackiness from other basic cable channels such as left-wing home MSNBC, which has featured conspiracies and repellent insults from the likes of hosts Rachel Maddow, Lawrence O’Donnell, and Keith Olbermann.